Located in Auridon, Banished Cells is the home of a number of keepers who seem to be better at being kept prisoner than the other way around.  While the arrogance they display is typical of the Aldmeri, you might expect some humility now that they are on their second bout with the exact same problem child.  In this case, you put a fairly permanent end to the possibility of having to deal with their foolishness again.

As always in dungeons, there is some basic terminology to know:

Keeper Areldur is a fire mage.  Thus, you can expect some ranged single target attacks.  Spell reflect or absorb can thus be very useful for the tank.

She also uses the fire mage ability fire pool.  Don’t stand in the pools of fire.

Areldur will occasionally throw ‘lines’ of fire.  These ‘lines’ will cover a different directional point on each pass, and she will do 2 to 3 passes.  These ‘lines’ are able to target 32 different directions from her.  They will always form in a clockwise pattern around her and will move outward.  This attack spawns a patch of fire at her feet, which moves.  I want that to be clear, it isn’t just a line that slowly fades, it is a moving patch of fire.  This is why I typed ‘lines’ like that.  Because the fire does move in a line, but it is really not a line of fire.  Although none of them start at the exact same time, there will be multiple ‘lines’ in play as they spawn much faster than the entire fire line animation.  It is mostly a melee hazzard, so ranged may be helpful if you find yourself having problems.

Finally, she starts with 2 fire atronach adds.  These can be killed quickly to make the fight less hectic, or may be controlled and killed with incidental AOE. 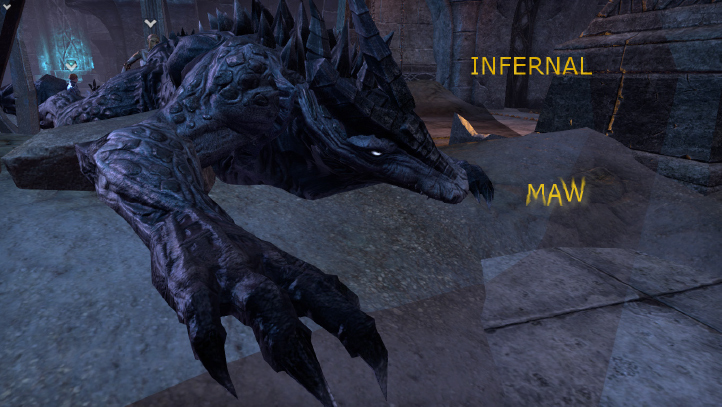 This Daedroth doesn’t really tell you why he is present, but you can guess that he isn’t there to have a tea party.  He does have the standard cone breath attack, and targets a random player with it even if they are not in range.

Additionally, he will select his current target and curse them.  This curse causes you to drop pools of fire under your feet.  The tank should maintain control, and slowly move backward as needed around the outside of the room to place the fire.

Finally, Mr. Maw also likes to use a stunning blow on the tank.  It is a good idea to taunt fairly frequently to keep him attached to you during stun periods.

Vornail is potentially one of the easiest fights around, and his only threat is from a heavy attack, which should be blocked.  This attack will hit a tank of equal level hard enough to one shot them without being blocked.

First, the keeper is alone, but there are 2 glowing orbs next to Imiril.  These will launch into the area when the boss is pulled, and as the fight goes on, another set or two will join in.  Players must avoid these orbs, as they will do damage to any player in their vicinity.

Second, Imiril will roll away into an orb.  This is the key for a wave of adds to be summoned.  The waves come in the order of banekin, twilight, clannfear.  Each wave must be killed as swiftly as possible so that the boss can once again be the focus of the fight.  The banekin and clannfear waves are susceptible to root effects, and should be kept controlled and killed by DPS.  The twilights are immune to roots, and should be countered with ultimate stuns and hard hitting AOE effects.  Of note for the tank, Imiril will come back out from one of the orbs, so the tank must watch and pick the boss back up to prevent deaths.

Imiril also uses a large self centered AOE which should either be avoided or blocked.
Finally, Imiril uses a heavy attack which should be blocked.

I swear this is really the name of this fight.  There’s 2 harvesters here, and neither of them seems to be named Sihma… but this really is what this fight is called!

These 2 harvesters do their normal harvester thing.  That is, they summon ‘feasts’.  Make sure you kill the feasts to keep them from healing, not to mention that you get some healing from doing so.

Additionally, they use the ranged 3 point attack like other harvesters.

Finally, they have a shield mechanism where they can put a protective shield up around one of them being heavily damaged.  This can either be handled by switching targets or simply by burning through the shield if your DPS is high.

Due to the nature of their attacks, the bosses do not tend to move.  The tank may swap to a ranged weapon and simply use the Undaunted taunt to keep the attention of both.  At range it is easy to avoid their cone attack, which is their main damage ability, so the tank may even swap to a more DPS friendly set of equipment.

The final boss in Veteran Banished Cells will look familiar to those who have beaten normal mode Banished Cells.  It is the same being, after all.  However, this time he has a few new tricks.
If anyone has not yet seen this fight, find the magical rune circles prior to engaging.  These are located by the stairs coming down into the area, and across the room in a straight line, to a spot near the exit.  Having people note these locations vastly improves your chances of winning.

Once pulled, you will notice that Rilis is a ranged caster type.  He hits for a moderate amount, and can be dealt with nicely by spell absorbing or reflecting effects.  This includes having the healer slot the light armor magic absorb… which can basically turn the healer into your tank, which helps greatly with the gold key.

Rilis warps around the room to certain points.  This can make melee dps frustrating.
He will lift somebody up into the air, which then drops them for some damage.  Additionally, they are enveloped in a runic curse.  This curse does damage until the person reaches the matching rune circle.  Remember, the colors should match.  Failure to get to the location required is one of the leading causes of making your healer cry.  Technically it can be healed through, but you are most likely going to run your healer dry, and then die.

Rilis will also stop and throw blue fire up in the air.  This fire attack targets 1 to 2 players.  These players will leave about 4-6 circles of flame behind them as they move.  The best method for avoiding this fire is to zigzag and confuse the landing system.  Try not to place the flame on the rune circles, as you can also make your healer cry by doing this.

Finally, Rilis will summon 2 feast orbs and a Daedroth from the throne where he starts the fight.  Due to his tendency to warp away, the feast orbs will often miss.  Even though this is true, they should be a priority target for DPS.  The Daedroth can either be tanked, or burned down by a very strong DPS group without any tanking.  Since they like to stop and breath fire, a good ranged dps can usually kite them without too much effort.

For the gold key, your tank will need to gather Daedroth.  The only way to keep enough of them alive (3) for the gold key is the use of taunts to control them or healing aggro to control them.  A very good group could potentially have the healer kite the Daedroth while the other three players use absorb/reflect effects on the boss and just DPS… but your healer must be highly mobile, and your players must be able to spam those absorb/reflect effects, as the incidental damage and reduced healing could prove deadly.  In any case, the group should control the Daedroth numbers until they feel they can focus on the boss and get the kill without excessive Daedroth spawns.  If using a tank, the tank will end up pulling any Daedroth to a side when trying to build up to three, so that incidental AOE will not kill them.

Since the veteran mode dungeon quest focuses on visiting the three keeper bosses and then Rilis, the players may avoid fighting the first two keepers if nobody needs them for the quest.  Additionally, Sister Shima may be skipped by simply sneaking around the harvesters.

Thanks for your patience and help to:

This guide would not have been possible without their help.