Trine 3: The Artifacts of Power 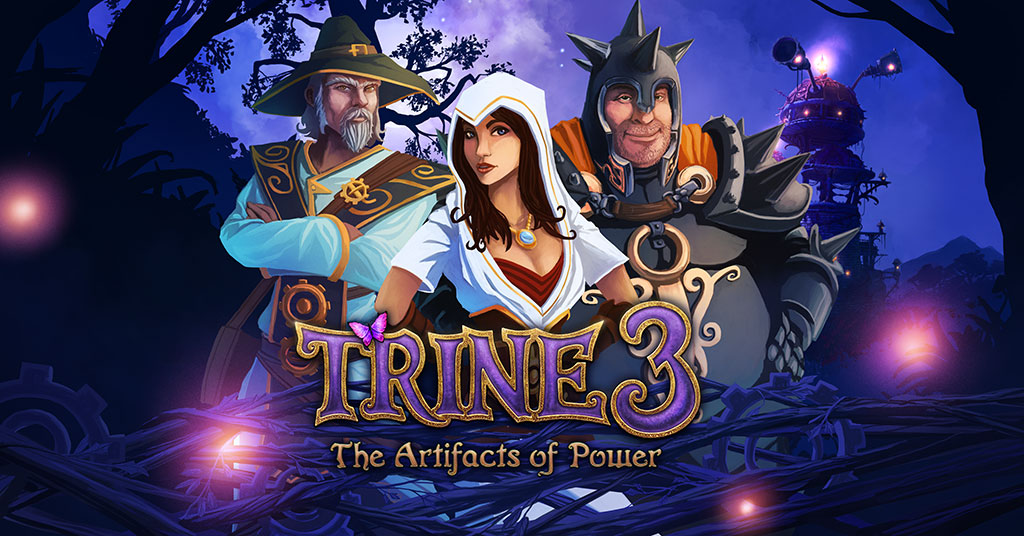 The Streams of Epic Adventure team recently delved into this gem of a game, and I have decided to provide a little recap for anyone who may be interested in looking into Trine 3.

I am fresh to the Trine series, and do not have the benefit of knowing the backstory of our main characters.  That being said, it in no way made the gameplay any less enjoyable.  It is a very stylized, fun game that will offer a LOT of opportunities for replay.

We were introduced to our three intrepid, common heroes through the first three missions.  Those familiar with the Trine series will immediately recognize Pontius the Knight, Amadeus the Wizard and Zoya the Thief.  Each of these heroes has their own class-specific skills, and seemingly innumerable ways for them to interact with each other to accomplish the missions.  They are commoners who happen to acquire their powers from Trine and one of the Artifacts.  But there must be a tragedy to further the story, and there is one that forces our players to band together to defeat the forces of evil!  Huzzah!

For your consideration, I introduce our adventurers. Pontius is your classic hack-and-slash knight with a sword and shield to slice, dice, smash, and bash your way through the level with brute force.  Amadeus is the wizard who can conjure boxes, and manipulate objects in the environment.  But don’t let the innocuous boxes fool you; they are very useful as we discovered in our play through.  And then there is the thief, Zoya.  Arrows-a-plenty and a hook shot comprise her arsenal as her ranged fire, and rope skills come in extremely handy to manipulate the environment and solve a puzzle.  The three of them together are extremely powerful, and work well in a balanced manner, but separately they are individual forces to be reckoned with. 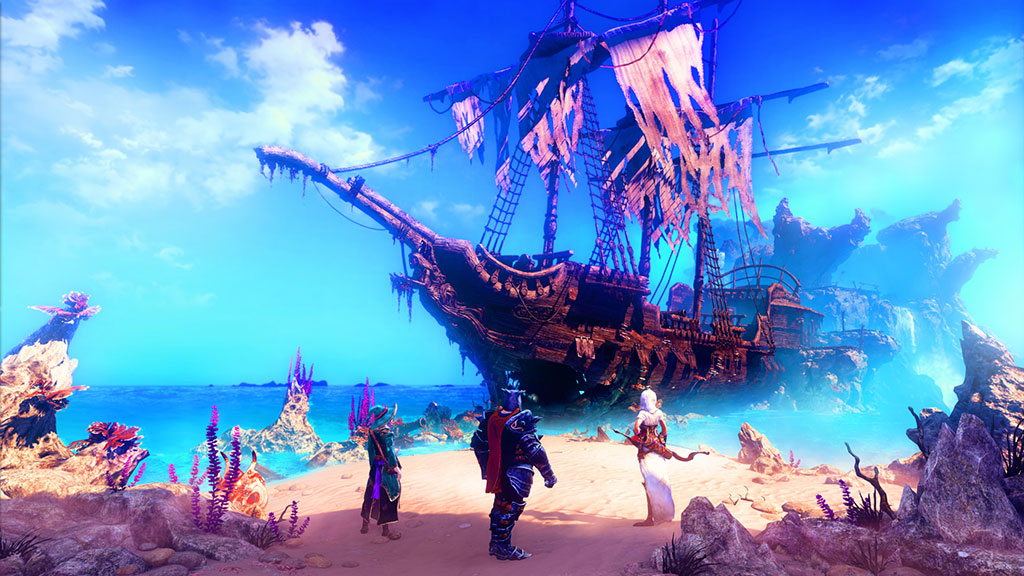 The level structure is straight-forward.  With a 3D feel to a 2D platformer, you have a lot of mobility to take down the bad guys and work your environment to your advantage.  The puzzles are simplistic, but take an occasional bit of skill to execute.  All the puzzles have methods that can be solved by any of the main characters, so be on the lookout for new and innovative ways to get through the level.

The graphical style of the game won’t blow you away with realism, but you will be impressed with the areas you are presented with.  As an example, your heroes are sucked into a book and the entire level consists of elements you will find in a book.  Art moves in the background, words form your platforms, and the puzzle elements look as if they were painted right onto the page.

The over-world, where you move from mission to mission, looks like a game board, complete with oversized dice you can kick around the board, or small tokens you can smash and dash all over the place. 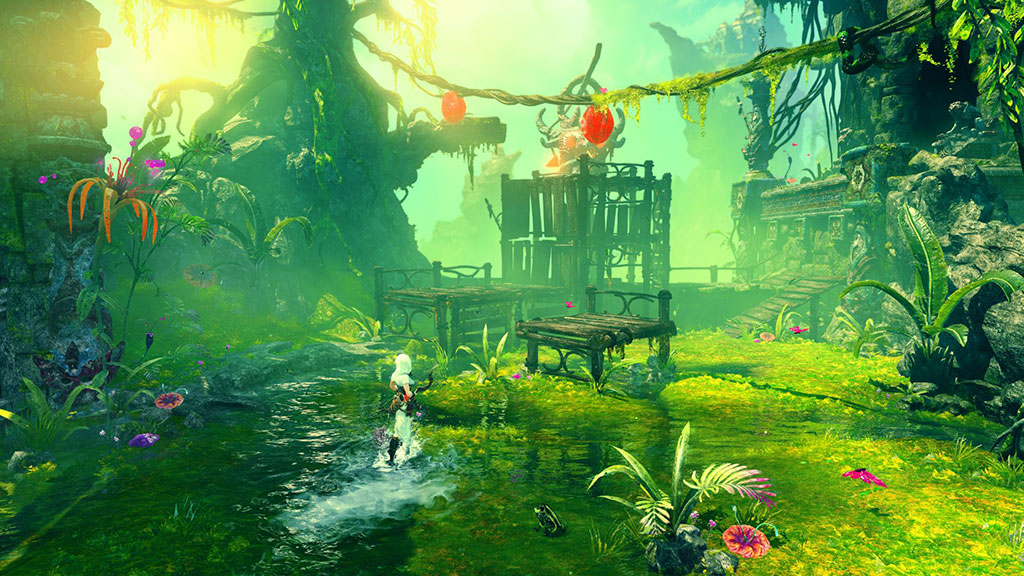 Each hero has their own style of gameplay, and you are given three missions off the bat to get you familiar with each.  The learning curve is quite low and eases you into the mechanics.

Pontius, the Knight – Your typical armor-bound, sword-and-shield swinging, bash-it-all-up tank.  Your main focus is to ground pound enemies, swing your sword, and leap from objective to objective.  You are also capable of deflecting fireballs back to the source, and can also deflect major environmental elements to your advantage.  If you like a style that lacks finesse, this is for you!

Amadeus, the Wizard – Here is a wizard that can’t wizard much, except the boxes he can conjure that he can wizard the heck out of!  You are all about subtle environmental manipulation.  The boxes you conjure are heavy, and can be lifted in the air and smashed down to bust up the environment, or any unfortunate baddies that happen to be underneath them.  You can have one conjured box on screen at a time, but the game lovingly provides others that you can use to build stairs.  Also, you can move elements that exist in the environment, such as bridges that might be slotted into wrong places.  This is quite handy if you like to look at your world, and make it work for you.

Zoya, the Thief – Now here is a hero who can move through the air with the greatest of ease.  Arrows and a hookshot are your primary weapons, and you will use them to the fullest.  Buttons can be activated with your arrows and your hook shot can land anywhere you see a ring.  This comes in handy if you want to pull objects in your direction, link two objects together, or even hold doors open that have doorknobs on both sides of the door.  Zoya is all about finesse, and will please anyone who may have come from an “Assassin’s Creed” background.

This game lends itself extremely well to both keyboard/mouse and gamepad playability.  The 3D/2D keeps you on your toes, keeping you mindful of your depth in the screen for accuracy of some puzzles, but you eventually get used to it.

The environmental elements are well designed, but have their moments of glitching.  These can be exploited to get you places, or could be abused to break the game forcing you to reset.  One example that the Stream Team encountered consisted of two vertically moving platforms on either side of a springboard in the middle.  The idea is you raise the first platform, jump onto the spring, raise the second platform, and spring up to it to continue to a bridge.  In our game play with the three heroes, we caused the second platform to glitch with a combination of ground slams and boxes.  We eventually were able to figure out a way across, but it took much longer than the designers imagined, I am sure of it.

Even though this game is designed so a single person can play through it, it really shines when you have all three players on the field at the same time.  The difficulty of the enemies scales to how many heroes you have on screen. The puzzles are well designed, allowing multiple solutions to be executed.  Some solutions use two or three abilities from different characters for execution, allowing for greater diversity if grouped.

A large part of the game revolves around collecting triangles that are scattered throughout the level.  And you can’t progress to the next level until you have collected enough of these triangles.  What gives this game good replay ability is that some of the triangles can only be collected by certain heroes.  You might have to swing up to a ledge with Zoya, or smash a certain heavy box with Pontius, or manipulate the environment with Amadeus.  It is well thought out, and I have had a good time trying to figure out how to 100% the game.

All-in-all, the Stream Team had a blast playing this game.  It is funny, clever, and plays well.  I highly recommend you pick it up and let us know what YOU think!