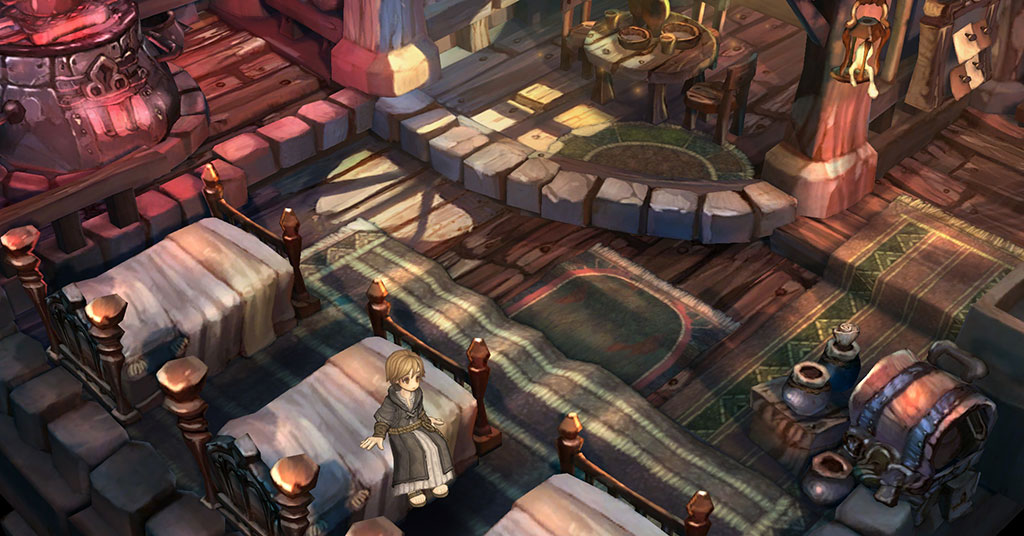 Hi everyone, this is Tide, first time writer for the Gaiscioch magazine. I have decided to make this my first post solely because Ragnarok Online (RO) was the first ever long term Massive Multi-player Online Role Playing Game (MMORPG) I played and Tree of Savior (TOS) is the apparent spiritual successor of RO.

I was tremendously psyched when I first caught wind that TOS is in production, my first questions were probably similar to quite a number of you. How much similarity will this game have compared to RO? Will the play style be similar? Will the music be good? Will there be Porings and Angelings? I have fond memories of RO, and I hope they do not mess this one up.

And so my journey began. (Story)

I bought my copy of the founder’s server exclusive access pass on the launch day and immediately set forth my journey into the land of… wait… what? After hours into the game, I am actually surprised that I was not introduced to what world my character wass travelling in. I know there are two capital cities (Klaipeda and Orsha) that we can pick to start from when we create our character, but that is about as much as I could recall. In Warcraft there is Azeroth, in Guildwars there is Tyria, in RO there is Rune Midgard, but in Tree of Savior, there is nothing.

Though questing in TOS is inherently interesting, it suffers from the lack of important story characters. There is no sign of specific characters that will follow or guide us through the story, characters that will journey with us, grow with us, nor characters whom names we will remember and feel sad if he/she dies in the story. The flow of the story have been from Guard A, to Captain B, to Paladin C, to random NPC X and so forth. I feel that TOS severely lacked polish in the lore department, and thus the entire game feels more like a Massive Multiplayer Online Action Game rather than a MMO-Role Playing Game. 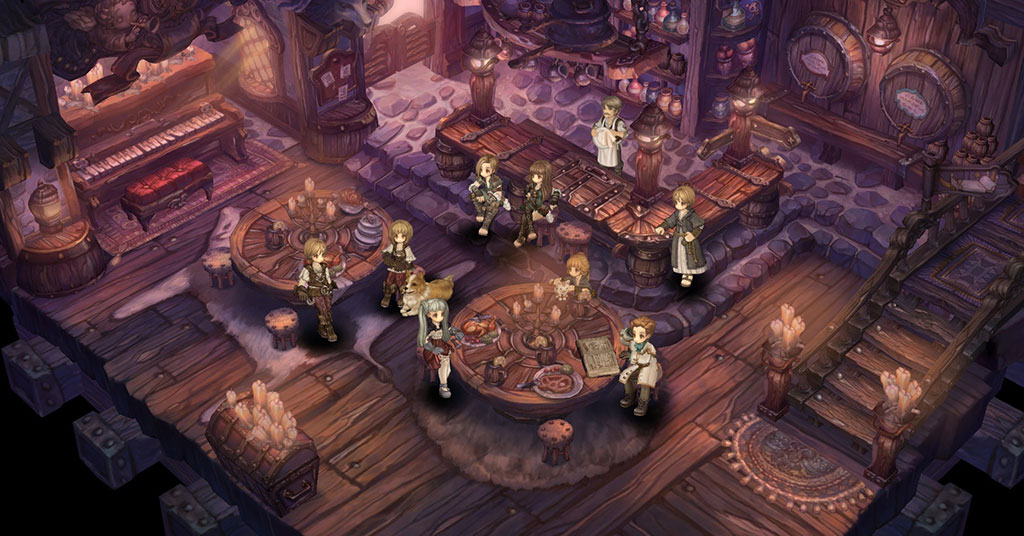 Continuing my adventure… (Sound and Graphics)

The music in TOS varies from metal to classical, it varies quite a bit yet the music doesn’t feel out of place in towns and during exploration. In my 20 hours play through I have not once thought of switching it off and listening to other source of music entertainment. Definitely a plus.

TOS stayed true to the graphic style of RO. Show this game to anyone who has played RO before and I am confident that they will think that this is RO version 2.0. The combination of water paint background with 3 Dimensional characters and structures blends well and doesn’t feel outdated even at this extremely realistic gaming graphic age.

The addition of letting the characters jump adds another layer of option and complexity to the playstyle which was never seen in RO and effectively allows much more room for exploration and combat.

And so the actions begin. (Gameplay and Questing)

The gameplay is less intuitive than I would have hoped.

In my first few logins I laughably thought the only way to navigate my character was solely through keyboard as that was the only option that was presented to me in the tutorial – it worked, but tremendously tiring for my fingers. At around level 20 I started to dabble with the controls and to my surprise there is actually 3 navigation options – Fully keyboard, mouse and keyboard, and controller. I have yet to try the controller option but so far my preferred option is to go mouse and keyboard which is once again, very similar to RO. It baffles me as to why the developers would not set the mouse and keyboard option as the default setting.

My honest impression of TOS, as I have relayed to a few of my old RO mates would be that, this feels like a laggy flash game – which I surprisingly found out a few days later, it is in fact, flash-based.

It suffers from a connection issue, and thus the constant “teleporting” of character back a few spaces and having needed to repeat the same action again. Opening new servers to ease up the bandwidth did help, but it does not negate the connectivity issue completely. Unfortunately, at the moment it seems like the issue is here to stay.

TOS utilizes cutscenes heavily for main-story quests and mini-boss fights in side quests. The game phases players into a cutscene almost immediately (without a loading screen) when the player reaches a certain location or completed a certain pre-requisite, and back out upon completion. By the time I was level 30 I had encountered approximately 20 cut scenes while questing.

The questing in TOS seems linear thus far, therefore fortunately or unfortunately, players are actually not encouraged to explore outside where their main quests lead them to. Repeatedly going through the same quests over and over whenever a new character is created will prove to be a negative point when determining a game’s replay ability. 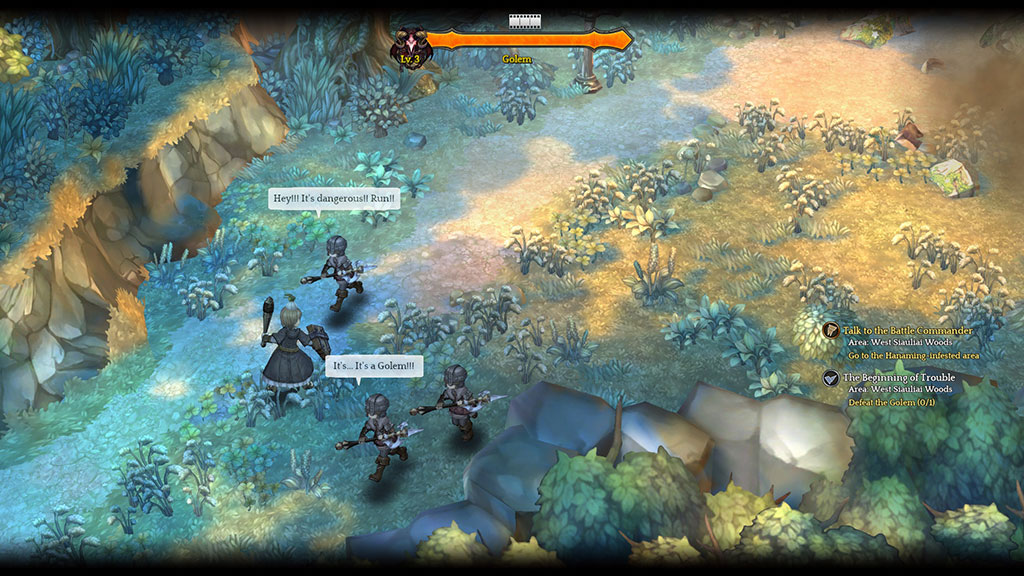 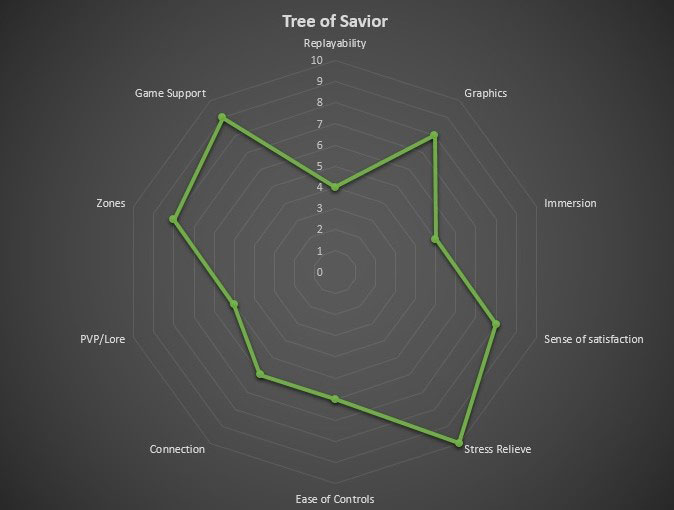 For this review, I have devised a gaming matrix on what do people look for in a game. It is divided into various categories: Replayability, Graphics, Immersion, Sense of Satisfaction, Stress Relief, Ease of Controls, Connection, PVP/Lore, Zones, and last but not least, Game Support.

Those who seek nostalgia and don’t mind mindless grinding (and I mean old school grinding) would enjoy at least for the first 20-30 hours of gameplay. It is very efficient in stress relief as every kill (even level 1) grants satisfaction, however it suffers from limited character customization options and lack of memorable story characters.

TOS is a stress reliever, the type of game that you log in after a long stressful day at work/school, buy a few potions and head over to a dungeon or map and start a mindless grind. I believe TOS is designed to give players a sense of satisfaction, even when killing a level 1 monster.

Definitely worth checking out the game, but I can’t help but get the feeling that sometimes, some things are best left in our long term memory instead of re-making another version of it... All in all, TOS feels like an unpolished gem. 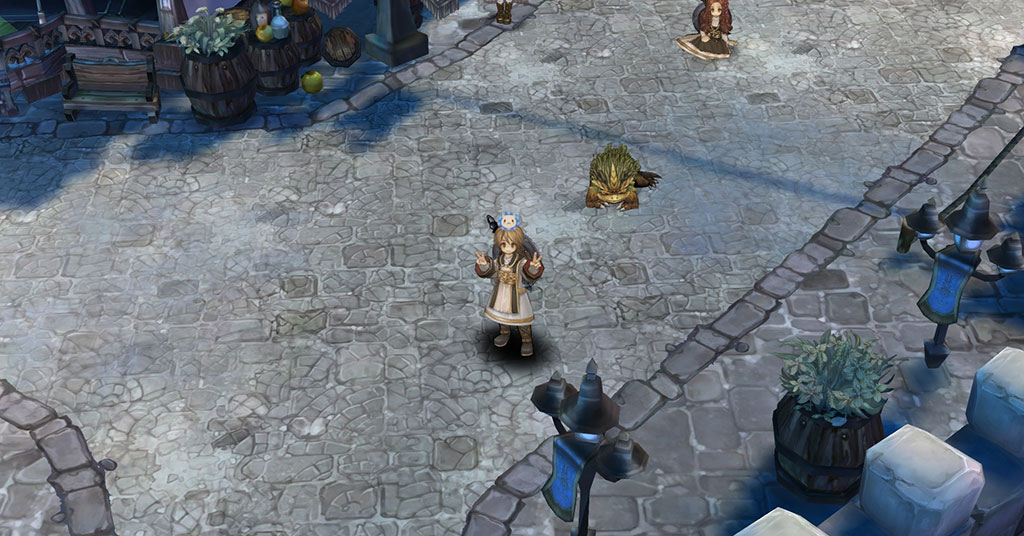