This Fall is about to get Gigantic 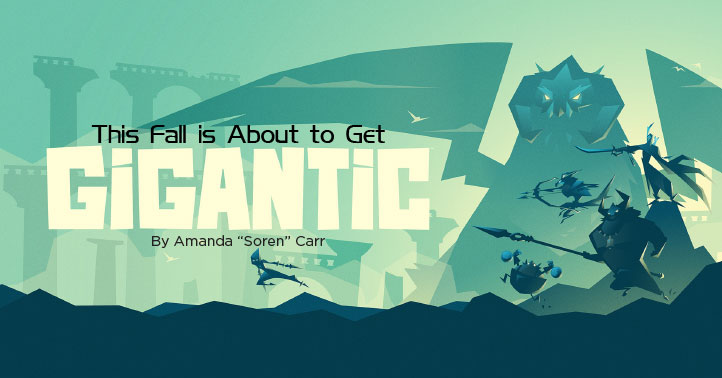 Some call it a ‘MOBA that’s not a MOBA.' Others call it an action, team-based MMO. Our friends over at Motiga, however, like to refer to it as a “free-to-play action shooter MOBA” where teams of five set out along with a massive Guardian in a giant fight to reign supreme. Gigantic pulls elements from various genres of gaming and combined them in a way that is both fresh and unique. It will be free-to-play and will have cross-compatibility with PC and XBOX users.

Motiga is an independent game studio based in Bellevue, Washington and they have one goal in mind: make core game experiences that are accessible, unique, and fun. The team has been working on Gigantic since 2012 and they are super excited to share it with the world.

Gigantic is more than just a pew pew fest or a mindless shooter. It pits players against each other in 5v5 matches where they’ll need to weaken and kill the opposing team’s Guardian while trying to keep their own alive. There are no lanes to defend.  No bases or towers to storm. Winning will require players to work together to earn enough ‘Power’ throughout the match to power their Guardian. This will allow their Guardian to attack. Once your Guardian has attacked and crippled the opposing team’s Guardian, your team must work together to strike at the heart and land the finishing blow to win the game. Fights are generally 15 minutes long and end in a climactic final battle known as the Clash!

Players level up their Heroes by completing map objectives and killing enemy players. The heros in Gigantic are unique and designed with skills that compliment each other. Tanks, DPS, survival, shooter; all play a part in creating the perfect team. So theoretically there is a play style to suit everyone. Each time your hero gains a level you will gain points to spend on upgrading or increasing abilities and ability mechanics, or you can put them towards passive effects like movement, armor, or damage. Players will have to carefully consider the battle they are going into and specialize their character accordingly. 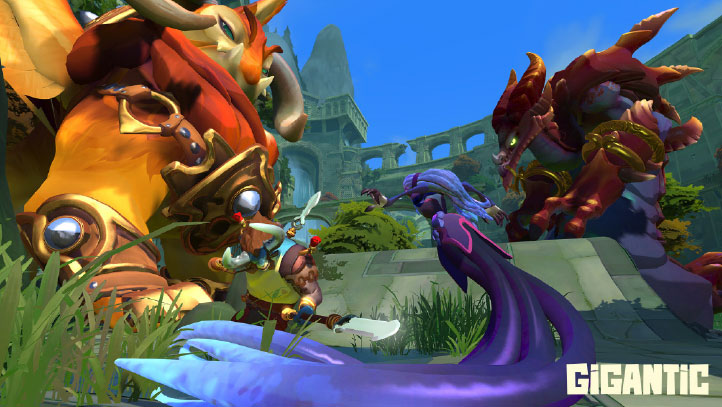 Along with player Heroes and Guardians, players will also get to choose five creatures before a fight and summon an endless supply of them during a match. Creatures have their own unique abilities that can help your team achieve victory and they need to be summoned strategically based on who you are going toe to toe with.

Maps are well thought out and feature a mix of narrow corridors and open spaces, with lines of sight that let players see what they are about to walk into—without giving away enemy movement. Various control and capture points are scattered about for the taking. The game controls are simple and easy to understand—and even easier to use—meaning you can get to fighting faster than ever. WASD keys control movement and mouse clicks control abilities.

Gigantic is a beautiful game, and you can tell the team took some inspiration from Team Fortress 2 and Zelda: Windwaker. The character art reminds me of the old cell shaded cartoons and when it’s set to the beautiful landscapes, it is nothing short of spectacular. You can tell Motiga’s art team put a lot of love into the designs. 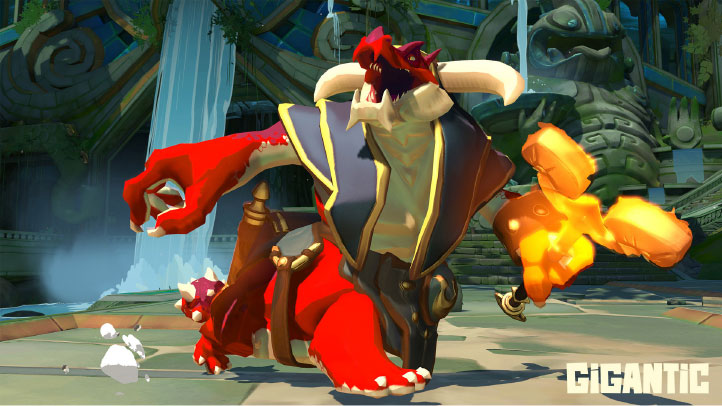 Motiga has partnered with Microsoft and they have plans to make Gigantic available to both PC (Windows 10 will be required) and XBOX users and only require one account to play both versions. Simply put, you get the same game no matter what system you decide to play on and everything you earn on one version will be available on the other. If that doesn’t give players something to cheer about, the addition of cross-platform support means PC players and XBOX players will have an opt-in option to play on the same server and team up against each other.

Get ready for one Gigantic party

This fall is shaping up to be one heck of a wild ride with Gigantic making its larger than life intro to the MOBA line up. The game is actively being developed and is currently in Alpha testing with an ever growing team of testers. Closed Beta is set to begin with the release of Windows 10 this fall. Anyone wanting to take part should grab a copy of Windows 10 and check out GoGigantic.com for details!