Zenimax has given us a basic layout for the year with things getting vaguer the further out they are. The developers want to keep us focused on what is coming next while letting us know they have more in the works. They like to keep their cards close to their chests and not reveal details until the changes are near release on the PTS (Play Test Server). I have to admit that I like this only because it allows them not to put some things in concrete until they are sure how they are actually going to accomplish it. I’ll do my best to sum things up because the patch notes for the first quarter release of the ‘Thieves Guild’ is close to 50 pages or so. If I copied from the PTS patch notes, or as players have come to call them “natch potes,” I made a note to that effect. 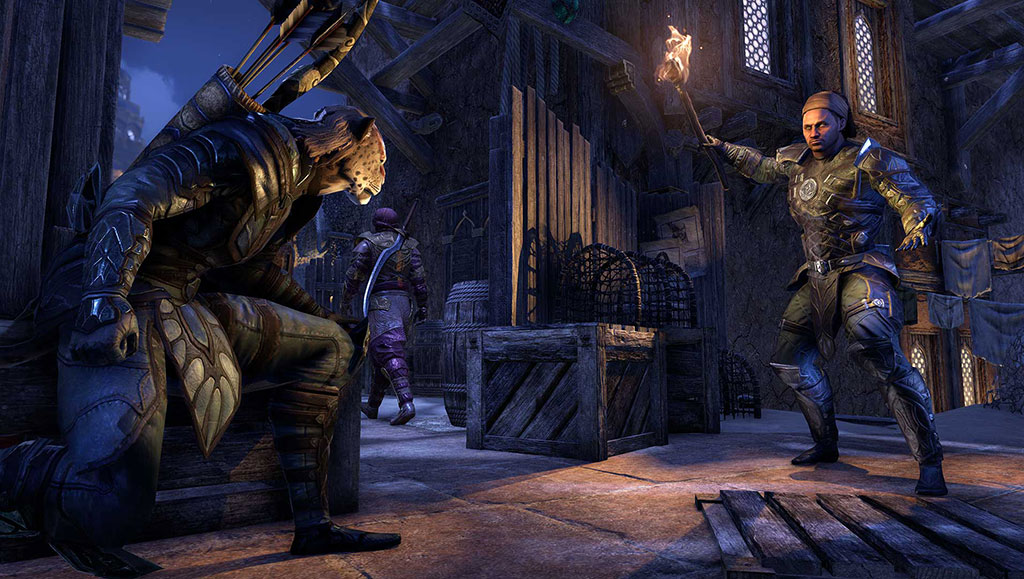 Abah’s Landing is where you will go to join the Thieves Guild. However, I don’t see it in my map list. I won’t spoil the fun, but the hint is to go check out an outlaw’s refuge for a quest giver. A new Larceny system and the Thieves Guild-only passives will add to what you can achieve joining this nefarious guild. Your Legerdemaine skills will get a good chance to be leveled if you have not maxed them out yet.

Hew’s Bane is a desert peninsula in Hammerfell. It contains fun areas of Hammerfell never seen in an Elder Scrolls game before. Abah’s Landing is one of the most elaborate cities in the game, and it’s the jewel of Hew’s Bane. It includes many back alleys, catwalks and hidden alcoves. Be wary as you explore, for you never know what you might find or what might find you. Much like Wrothgar, the nodes level to your character’s crafting level, your loot is at the character’s level and you are battle-leveled up to fight mobs set at veteran rank 16. Currently, the PTS has all nodes at your maximum crafting level, which is a slight but welcome difference from Wrothgar.

The Larceny System includes (straight from the PTS patch notes):

There are quite a few new criminal activities being added to the Justice System. There are three new activities, and Trespassing goes beyond picking locked doors as follows:

A full passive skill line has been added for the Thieves guild. These six new passives will assist you with your Thieves Guild work and are unlocked as you level with the guild. They are (straight from the patch notes):

An ancient Khajiiti shrine known as the Temple of Seven Riddles has been claimed by the dro-m’Athra—ancient, moon-hating spirits from the heart of the Great Darkness. The monks residing within the temple, led by Moon Bishop Kulan-dro, have all been corrupted and possessed. Now, they lurk within the shadows of the Temple, preparing to spread their dark influence to the Khajiit of Elsweyr and beyond. Fearing the worst, the Moon Bishops have dispatched a group of Twilight Cantors to the scene. These powerful monks are no match for the evil within the temple. The order’s leader, Chief Crier Adara'hai, asks for the player’s help in banishing the dro-m’Athra and resealing the boundary between Mundus and the dark realm of Namiira. (Straight from the patch notes because I love how they wrote it up).

This trial can be found in the southwest section of Reaper’s March and includes both normal mode and veteran modes. There are two ways into this trial, including the usual travel to its entrance or talking to Bakhum, a Khajiit on the docks in Abah’s Landing to receive the quest, The Dark Moon’s Jaws. This quest will take you directly to the trial.

Here’s a new twist. This trial will scale to the leader’s level, much like the dungeons do now. To qualify for the leader boards, you must do it on veteran mode at veteran rank 16 (VR16).

There are unique sets, including armor, weapons and jewelry, only available to this trial that can be acquired in either mode. They include unique, group-based PvE bonuses. 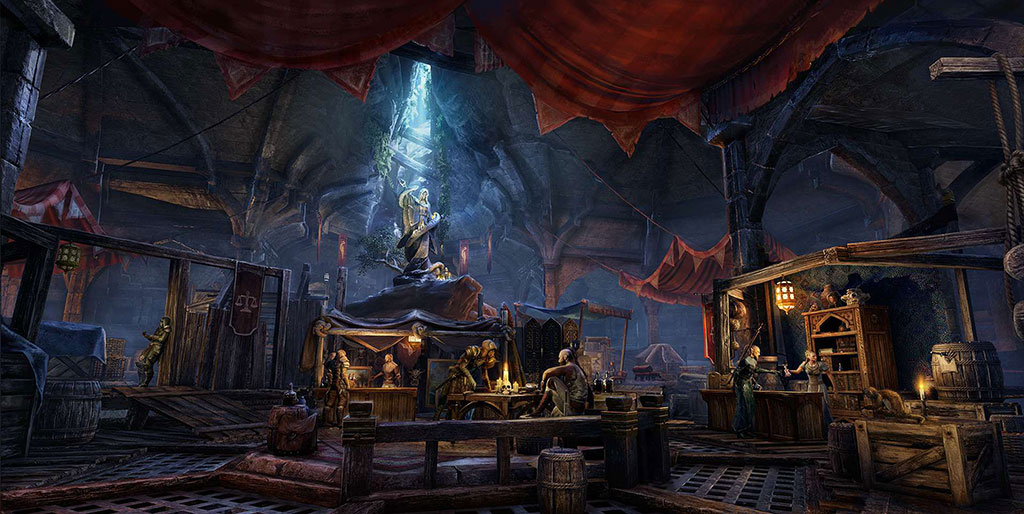 These non-combat assistants can be called up from the Collection system. You cannot have one of these active at the same time as a pet. Some of the things they will be able to do is sell or fence goods and perform banking for starters. They will not be limited to those activities.

All progress will be saved in the Veteran Maelstrom Arena, and a new quest named “Veteran Maelstrom Arena” will be added to coordinate the saving function. You will be able to have this quest along with the already existing quest for running the veteran arena. Per the patch notes, if you make it to a certain area of the arena and have to logout, you will have a portal to return to that point. If you choose the portal to complete the arena, you will not be eligible for the leaderboards. Due to timing and other factors being included in the leaderboard standings, you must complete all steps of the veteran arena in one run.

Starting with this DLC, the reward of a vanity pet or item, will be rewarded for every DLC pack you own. If you are a Plus member, you will have access to them while you stay a Plus member. The available vanity pets are an Echalette for Orsinium and a Jackal for Thieves Guild, both of which will be found in your Collections.

You must complete a new achievement to get these vanity pets, which occurs when you walk into the main city associated to the DLC: Orsinium, obviously, for the Orsinium DLC and Abah’s Landing for the Thieves Guild DLC.

All future DLCs will have some sort of reward associated with them.

The DLC also includes several new sets that can be crafter or set items beyond the ones already mentioned that are connected to the trial. Some older sets are also being revamped, though the details are sketchy in the patch notes as to what specifically.

Introductory quests for both Orsinium and Thieves Guild have been added to Collections under a new tab.

This version of the client will be downloaded with the patch and will open automatically on any system that is 64-bit compatible. This will fix a large number of crash issues as well as improve memory usage. For the Mac, it is recommended to have 8GB of RAM and systems, since having only 4GB may cause a negative performance. 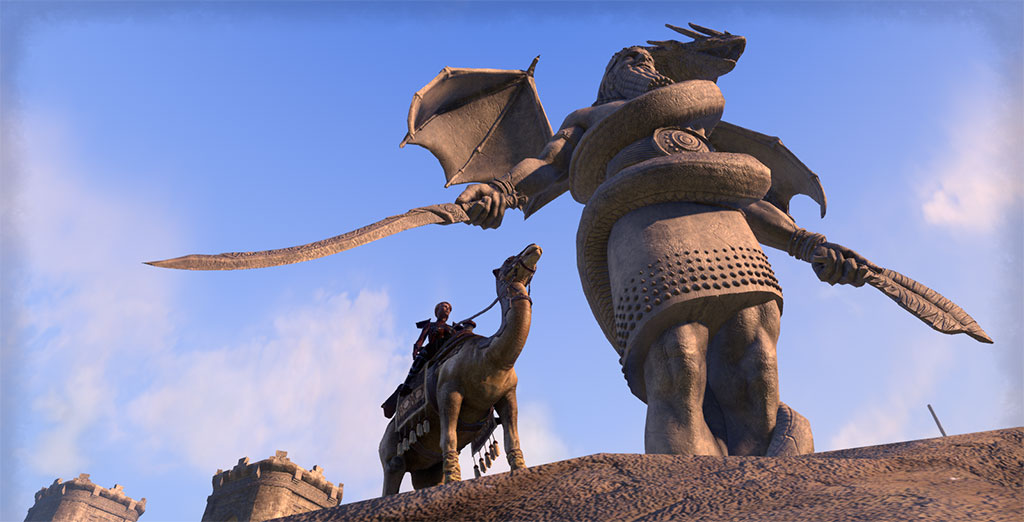 Adhazabi, a merchant, will sell powerful item sets not available in Cyrodiil for a hefty amount of AP or gold. He will be located at the following spots: Western Elsweyr Gate, Northern Highrock Gate, and Southern Morrowind Gate. He will only be available during limited days and times.  Obviously, he must have time to restock, eat, sleep, and whatever else a merchant of such esteemed goods may need.

Forward Camps are back! There have been a few changes, as listed:

A lot of work went into balancing and making all the stars viable choices. The Warrior (red) and the Mage (blue) tree abilities are more closely matched to counterbalance defensive and offensive abilities. Infrequently chosen abilities have been improved and consolidated, which should give greater build diversity. The tooltips and effects have been updated to help explain the bonuses.

This update introduces a host of new crafting motifs to learn:

I rather like that little caveat at the end. Who doesn’t like Cadwell and his unique headgear?

Final Comments on the First Update of 2016

One caveat is that all those wonderful trophies acquired from public dungeons will now have their own Collection section called Mementos. If you deleted them from your inventory, don’t worry. Logging on your characters unlocks them in your collections for the ones you have completed. It’s a space saver for those who wanted to keep some if not all of these just to mess with the effect.

There are plenty more tidbits buried in pages of patch notes for the PTS used for this article writing, but this sums up the major items for the Thieves Guild DLC and the main game updates to come to live on March 7th.

Items for Later this Year

Second quarter will bring the Dark Brotherhood DLC and the removal of veteran ranks. Hopefully, the timing will work that I can have an article all about it for our magazine release around June 1, issue 9.

Housing - There are no details of exactly how this will fit in.

Barber Shop - it may not be called this, but there will be the concept of one. So, for all of you who hate your character’s look, you will be able to adjust it by the end of the year.

PvP - This has no actual date, but they are looking at adding capture points in the various “city” hubs around Cyrodiil and in the Imperial City. They are still looking seriously at adding instanced PvP, as well.  I think we may see the capture point addition first, but saying anymore would be more speculation.

Nameplates - These are coming, though adding the guild tag to it may not happen. Part of this is because the game allows you to be in five guilds at once without needing to represent any one of them. This would force the game engine to track a lot more information. In addition, Zenimax would have to change the UI interface so that you could select which guild you want to display.

We should be seeing a lot of new things this year. The game is definitely staying alive despite various things causing delays last year. Will all the changes be good ones?  It depends on the viewpoint, but I’ll be sticking around to see and updating you in further articles.