The Ruined City of Arah: Victory or Death! 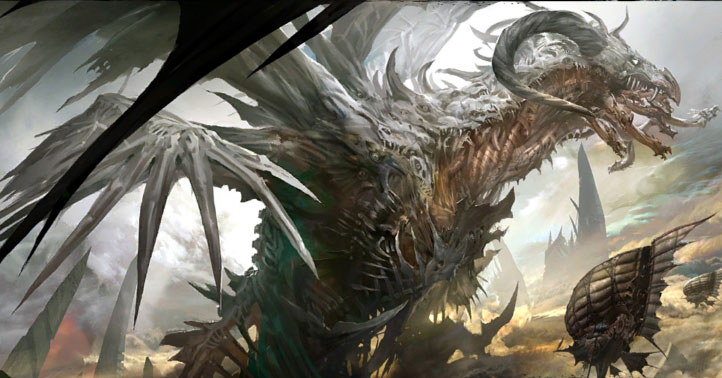 I would suggest you bring five level 80 adventurers for the most efficient run. (You can try with lower levels, however that will most likely result in a much longer dungeon run.) The average completion time with a group of level 80 players is around an hour, so let’s begin now.
One of the first things I want to know about a dungeon is where the repair anvil is; in Arah Story Mode, the anvil is right by the waypoint at the beginning of the dungeon. When you first appear in the dungeon, turn right to see it. It’s important to be fully repaired when you fight any of the early bosses to help decrease kill time and increase your chance of success.

Once we get our bearings, we head immediately toward the encampment. Be careful, the bridge is very narrow. Don’t panic if you fall off, it’s easy to just continue moving along the path to the right and it will bring you right out near the camp.

Once you’ve found the camp, someone has to talk to Caithe. You’ll find her surrounded by the survivor’s of Destiny’s Edge. During your personal story, you’ve helped them all get past their differences and they’ve come to fight the dragon together, with your help of course.

While you’re in the camp, there will be attacks by various groups of undead. None of them are really dangerous, and the NPC’s in the camp will take care of most of them. There are a number of cutscenes that will occur while this is all going on, eventually you will be given three locations to retrieve power cores to enable the airship to take off.

There is a specific order of power cores; the first power core is behind a door to the north with two sparkling platforms. One person has to stand on each while the party fights off the attackers until the door opens.

Once you’ve got the door open, finish off any remaining attackers before going inside, you don’t want them following you and adding to the fight while you’re playing with the first boss. Speaking of the first boss, let me introduce you to the Champion Risen Lich.

We range most of the fights here. This guys has quite an array of skills. But he’s not really hard to beat if you work together and use members of Destiny’s Edge to stand behind as a shield. He will steal health and inflict chill and blind. His Unshakable and Defiance boons will make him seem tougher than he is. Just keep on hitting him with everything you have.

He will place Unholy Attunement on you and then send out blue orbs in all directions. If they hit you when you have the debuff, he will steal life from you. I always stand behind someone like Eir to keep them from hitting me. You can also dodge. There is a rumor that if you dodge directly into the blue orbs, they will bounce harmlessly. We have NEVER been able to get this to work for us.

We defeat this guy by staying out of his Life Transfer Circle and ranging him. Keep moving, keep hitting and soon you’ll finish him off. His most annoying ability is teleport which will sometimes take him out of range and give him a chance to heal up a bit. Just keep at it and you’ll beat him.

Once he’s downed, search the wreckage for a power core. Once it’s found the boss chest will appear. Now, if you need to repair, it won’t cause any delay to teleport back to the beginning and meet the party back at the encampment. Once you’re all together again, head south.
The next door is protected by two obelisks and a bunch of grubs.

Stack on each obelisk, focus fire and use AOE to take care of both the obelisk and the spawning grubs. Once both obelisks are destroyed clear out the remaining grubs before entering to fight the Champion Bloated Creeper.

This guy eats grubs to gain health and a buff that could easily overpower you if he eats too many. Range him! Focus on him until he spawns grubs, then kill all the grubs before he eats them. He spawns them wherever his enemies are standing. You can make this a lot easier by all standing close to each other and far enough away from the creeper, so the grubs will spawn close to you, then switch focus to the grubs or use AOE to kill them. Again, we range this fight to keep the grubs from spawning right next to him.

Just stay together, keep the grubs away from him, and you’ll defeat him in just a few minutes. Once again, pick up the power core. If any of you need repair, waypoint back to the beginning and meet your party at the encampment. 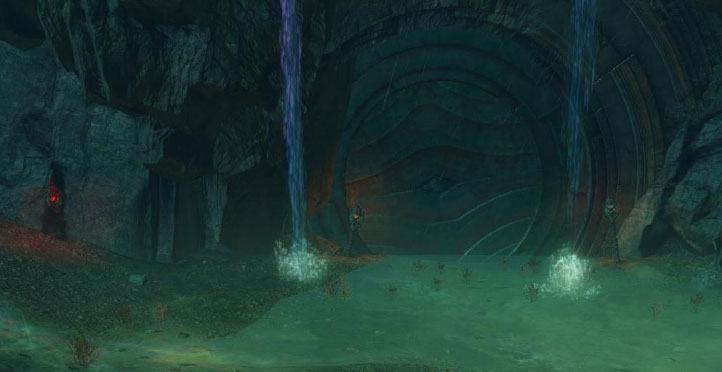 The final power core will be found up some stairs to the east and you’ll see waterfalls on either side of the door. This door will open automatically once everyone is there. (Including Destiny’s Edge.)

Once it’s open, you’ll see a number of red circles and Orrian Eyes. The Eyes will kill you almost instantly if you get within range.

Luckily, you can fight them without being very close by using your ranged attacks. Once you’ve killed the first Eye, carefully avoid the circles and get a little closer to attack the second Eye. You’ll know if you get too close, you’ll most likely be dead. Continue avoiding the circles and killing each Eye until you get to the end of the path and meet the Champion Risen Knight.
The Champion Risen Knight will spawn Risen Plague Carriers as well as Necromancer Marks. The annoying part of this fight is his evades. The spawns don’t last long and you just need to keep fighting the Knight. We always range this boss. If you do melee, jump in and hit him, then jump right back out.

Once you pick up the final power core, head back to the camp for a cinematic. Once the cinematic has completed, you’ll find yourself on an airship. I can’t emphasize too much the need to get your bearings on the airship. Find the doors, the steps, and the repair anvil before you start another fight. If you die while on the airship or on the plateau that follows, you will spawn at the waypoint on the ship.

The ship will take you to the Valley of the Giants. Three of you will have to take the cannons on the right, the other two will keep the deck clear of spawned mobs. The cannoneers will use the 2 key only. When the giants reach down to grab some goo out of the swamp, use the 2 key to put up a shield. The goo will bounce off the shield and hit the giants.

Once all five giants are dead, you will be given an opportunity to climb into a helicopter on the bow of the airship. This helicopter will take you to the top of a plateau with three “towers” that need to be knocked down. Each tower is guarded by a different group of mobs. One is guarded by gorilla’s and eyes. Kill the eyes, then four of you attack the gorillas while someone with a lot of damage starts beating on the tower. While the tower is up, the gorilla’s will keep respawning. Once it’s down, finish the gorillas and move on.

The second group we hit are the Orrian Spectral Weapons. Same plan applies here. Four people go after the mobs, the fifth knocks down the tower then helps clean up the mobs.
The easiest tower is the one protected by the oozes. Everyone should focus on taking down the tower. Once the tower is down, all the oozes die. We save this one for last because we don’t want any wandering mobs to get in the way of the boss fight here.

The Mouth of Zhaitan will appear once the third tower is down. He will throw out fiery stones. We use these to stop his whirlpool mouth attack. As soon as the mouth starts the whirlpool, throw one of the stones at him. This will prevent him from sucking you all in and doing massive damage. Keep using those fiery stones to stop his whirlpool, and keep hitting him as well. Once he’s finished, a cut scene showing troops coming in to open the big door to the next section.

Once back on the airship, you’ll divide again between three cannons and two deck clearers. (Don’t forget to look for the chest.) There will be some deck clearing as you go until finally you get to meet your first dragon. You won’t know which side of the airship to fight him on until he attacks the first time. If he hits you on the left, that’s the side you’ll use. Just keep firing at him with the 1 key and use the shield with the 2 key to minimize the incidence of mobs on the deck. It will likely take two or more of his attacks to kill him.

Once he’s dead, you will be meeting two dragons. Again, you won’t know which side each of them will be on until they attack. The first attack will be a single dragon. After that they will both attack. Either both on the left, one on each side, or both on the right. You’ll have to figure as you go how to best handle this fight. If they come up on the same side, it’s a matter of targeting one then the other. If they switch sides, be prepared to fight one on one side, drop off the cannon, move to the other side and hit that one a while. Once one of them is down, you just have to finish the second one.

Once these two dragons are done, you’ll have to switch ships to get on the biggest one. This is the final part of the dungeon. Again you’ll go to the bow. Wait until the larger ship is beneath you before you jump. If you jump too early, you run the risk of a very long fall. Notice the cannons and the control panels on the new ship. Also, you’ll find a chest behind the controls on the deck.

You’ll be using the cannons on the right side later, but for now you’ll have to keep the deck clear while Zojja takes her sweet time configuring the big gun. You’ll run through a number of simple mobs that die very easily. Eventually the Eye’s of Zhaitan (the big ones) will appear at the consoles Zojja was working on. Once they are dead, everyone grab a cannon, use the aiming arrows to get as close to Zhaitan as you can, and proceed to fire.

During this part of the fight, the only danger will be the occasional poison cloud at your feet. If you notice your health going down, drop off the cannon, get back away from the poison till it dissipates (condition removal only works when you’re not on the cannon) and then get back on and continue firing.

Once the dragon is dead, we sometimes find it fun to all jump off the ship. If you try this, you will die, but you will still get credit for killing the dragon.

After the dragon is killed and all the cutscenes are done, go to Fort Trinity and talk to Trahearne to finish up your story.

Note: You do not need to be at “Victory or Death” in your personal story to participate in the story mode dungeon, but you will not get credit for the dungeon in your story until you’ve done it after reaching “Victory or Death.” 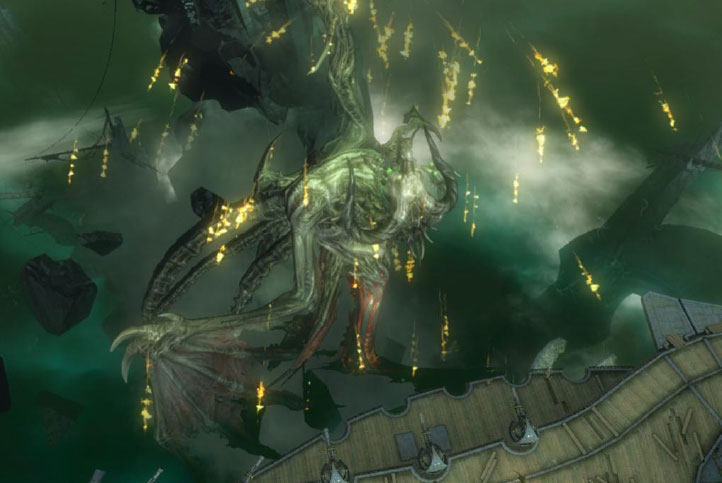