Return to the Gold Coast of Cyrodiil and visit the cities of Anvil and Kvatch. Here you will find the Dark Brotherhood and your chance to prove yourself as an assassin, if you dare. The last time we got to check out this area of Tamriel was in The Elder Scrolls IV: Oblivion.

This DLC (DownLoadable Content) includes a new zone with its own delves and world bosses, similar in size to the Thieves Guild DLC. The Dark Brotherhood will have its own storyline and quests for you to accomplish and prove your worth along with a new passive skill line to work on. There will be poison crafting added to Alchemy, crafting bags, removal of Veteran levels and other updates to existing content.

This DLC, like all others, is available for play to all ESO Plus members, or you can buy it in the Crown store for 2000 crowns. The patch will include the DLC and many updates to the main game all can enjoy.

About the Dark Brotherhood

Everyone knows to call on the Dark Brotherhood when they need someone out of the way permanently. There are two types of repeatable quests that will increase your standing within the ranks and offer suitable rewards.

Contract Quests - Elam Drals is in charge of handing these out. Check out his ledger in the Dark Brotherhood Sanctuary after you have become a member. For some gold you will be tasked to find and properly dispose of the target. Be wary and avoid the guards so you don’t get a bounty on your head for your heinous act. There is no limit to how many of these you do, but you are only allowed to attempt one at a time.

Sacrament Quests - Speaker Terenus, the one who inducts you into the Dark Brotherhood, to hand out these very important missions. You will travel to specialized locations where you must stalk and kill your prey. Completing any bonus objectives will help you reap greater rewards, if you survive! These quests open up shortly after you have joined and completed the quest “A Lesson in Silence.” You can only accept one of these quests per day.

There are a total of six skills to work on after joining the Dark Brotherhood, which are:

Two of each have been added with the Gold Coast zone.

The world bosses are part of these two areas: Tribune’s Folly includes a minotaur drawn to the Imperial site who has undergone a dark change, enslaved to the terrible evil lurking below the ruin. Kvatch Arena is where a regular Pardoner’s Brawl is held to allow prisoners condemned to death to fight for their freedom. Which will you dare to try first--a romp with the dark and evil troll or the disruption of a brawl of condemned prisoners forced to fight by the Colovians?

One of the delves is Hrota Cave where you explore a drowned sprawl near the city of Anvil. It is haunted by wispmothers and the shambling corpses of travelers drawn to the place. The other challenging area is Garlas Agea, claimed by the Gold Coast Trading Company to store its illicit cargo. Will you be able to take a cut of the loot from either of these places? You won’t know if you don’t try.

Other Additions to this DLC to Check Out

Collectible Personality: Assassin - once you have access to the DLC and visit the Gold Coast, this is available to you. It allows you to take on a new attitude by changing the way your stand, move, and emote. When just standing around, you are in a more defensive, alert stance and will play with spinning a dagger in your hands. I did figure out how to break that in PTS (Play Test Server) by pulling out my bow and after that the dagger never actually showed up.

These can be acquired by playing through the Dark Brotherhood content. They are used for swearing a blood oath or performing the ritual of Black Sacrament itself.

There are three lootable sets you can obtain by participating in the content of the Gold Coast.

There are three new crafted item sets that have crafting stations within the Gold Coast.

There are four new PvP-based item sets available from the Telv Var Stone vendors of the Imperial City.

There will be three new motifs to acquire via chapters you can loot in various ways.

There will be three new titles you can obtain:

These special containers can be purchased from the Tel Var General Merchants in Imperial City, but they won’t be cheap. Each one has a specific collectable inside which will include the Xivkyn Polymorphs that were previously only obtainable through rare drops in other Tel Var purchased containers. Runeboxes can be traded, mailed or sold on the Guild Stores. Opening it will bind it to your account; however, you can only open a Runebox if you do not own the Collectible contained inside. So if you can’t open it, trade it or sell it!

You can now make poisons with the Alchemy system. You can create these poisons with new or existing ingredients in a new solvent type (oils). The poisons can be equipped alongside your weapon slots. The poisons have a chance to apply to your enemy during your light and heavy attacks. The poisons are consumed when applied.

You can obtain the oils from various monsters throughout Tamriel. The new reagents come from many critters and monsters, and they not only allow you to make the poisons but also make new effects for potions.

While a poison is equipped, any weapon enchantments that weapon has are temporarily suppressed. They become active again when the poison is no longer equipped. Master’s Weapons and Maelstrom Weapons will still have their stat bonus working with poison equipped, but the unique-ability modifying effect will be suppressed. Due to this, the tooltips have been changed to show the poison effects and not the weapon enchant and charge. 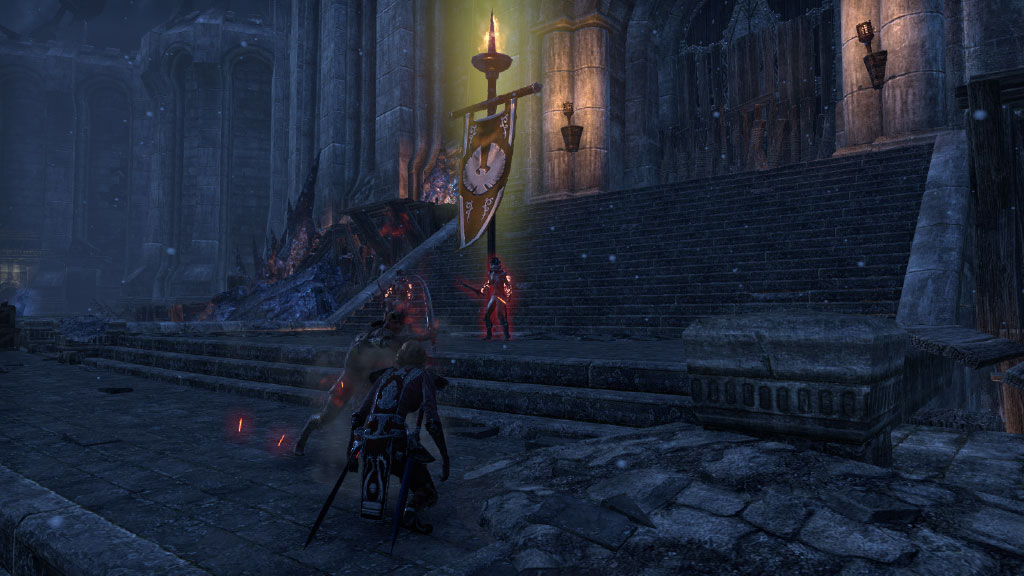 Capture the Flag in Imperial City

Imperial City is getting some overhauling and additions with this patch.

The biggest change is the ability to now claim each district for your alliance. To control the district, you must capture the flag, much like you do for resources out in the open lands of Cyrodiil. Do not try this alone; I only did to get this screenshot. Even in sneak mode, the fire magic blast radius is huge. It was at least twice as far from the flag as where I stopped for the picture.

You will gain 33% more Tel Var stones in the districts that your alliance controls. However, they have changed the amount of Tel Var stones you lose upon death to 50% no matter if it is PvE or PvP. Previously, this loss was only 10% for PvE and a whopping 80% for PvP. The other convenience to controlling a district is you can revive in it. If your alliance does not control any city district, you will revive in the sewers if you die in any city district. I proved both the Tar Val stone loss and the return to the sewers getting the flag shot, since Ebonhart Pact was not doing much at all in IC on the play test server.

A bit of balancing went into the bosses and elites to be found throughout the city. Patrolling Horrors and Xivkyn Elite are still best handled by four players, but have had their attacks adjusted so you are less likely to get killed by one shot.

Where Did Those Veteran Ranks Go?

Part of the Base Game Patch includes the removal of the Veteran Ranks, which has been promised for some time now. You will be capped at level 50, and your strength beyond that will be based on the Champion Points you have earned.

You will not lose any of the skill points or attribute points you worked so hard to earn as a veteran. Points will accumulate as follows:

When you first login after this patch goes live, you will be rewarded a one-time bonus of 2.5 Champion Points per Veteran Rank gained on your highest level character. The maximum points for this reward is 40 if your highest character is VR16 at the time of the release.

This update brings some changes to how you will deal with mobs as you level through the Silver and Gold zones. As already noted, the mobs have a new Champion Point ranking. Every Veteran Rank is now equivalent to a spread of 10 Champion points. Mobs lower ranking than you will have some experience reduction as follows:

The monsters will scale up faster in difficulty through these zones due to this new point system rather than being a flat Veteran Rank for an entire map area. This includes some re-leveling of all the Silver and Gold zones to make for a better flow of matching level throughout.

Some things have been modified due to this change, but the maximum number of Champion Points you can have on your account remains at 501. You will now see how many Champion Points your account has on the character select screen. There is a new experience bar to show which color of point you are working on acquiring and that’s it once you hit 50, no more dual bar. Guild, friends, and group lists will now show everyone at 50 rather than their Veteran Rank. The tooltips have been adjusted to show the proper ranking system. The loot history will now include information about your enlightenment bonus when showing experience gains.

There are plenty more improvements that could be discussed in this article, but the above are the biggest changes coming with this latest DLC and patch. A couple not mentioned above are being able to buy additional character slots from the Crown Store, and ESO Plus members get a nifty crafting bag to store all those items cluttering the bank and inventory. There are plenty of new and dark adventures to experience with this DLC.