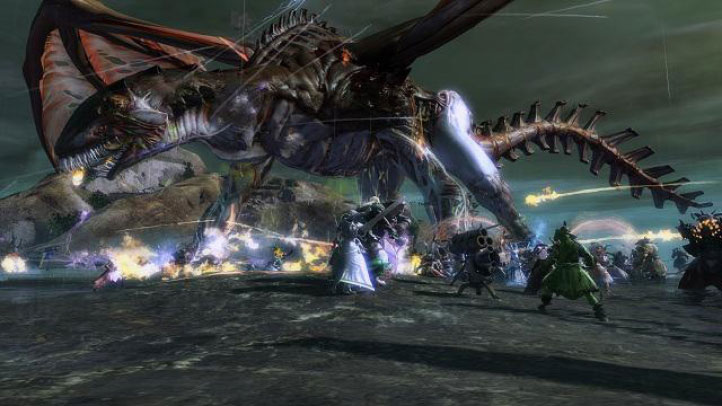 Tequatl the Sunless is one of Zhaitan’s champions. Tequatl, whose name means “the one in darkness” in the language of the hylek (thus, with hylek calling Risen “the Sunless” his name roughly translates into “risen one in the darkness”), has long plagued the Splintered Coast of Sparkfly Fen, opposed by the Vigil, the sylvari of Caer Brier, the asura of the United Arcanist Lab, the quaggans of Brooloonu, and the local hylek tribes.

Recently, Vigil tacticians have reported that Tequatl seems to have “evolved” and its attacks have become more elaborate, and it has become more difficult to fight. Warmaster Narru who was dispatched by General Almorra Soulkeeper to investigate the reports theorizes that it may be a response to the Pact offensive in Orr; though whether this is the case remains to be seen. At a similar time to Narru’s assignment, Rytlock Brimstone had sent Rox to track and kill Tequatl the Sunless. 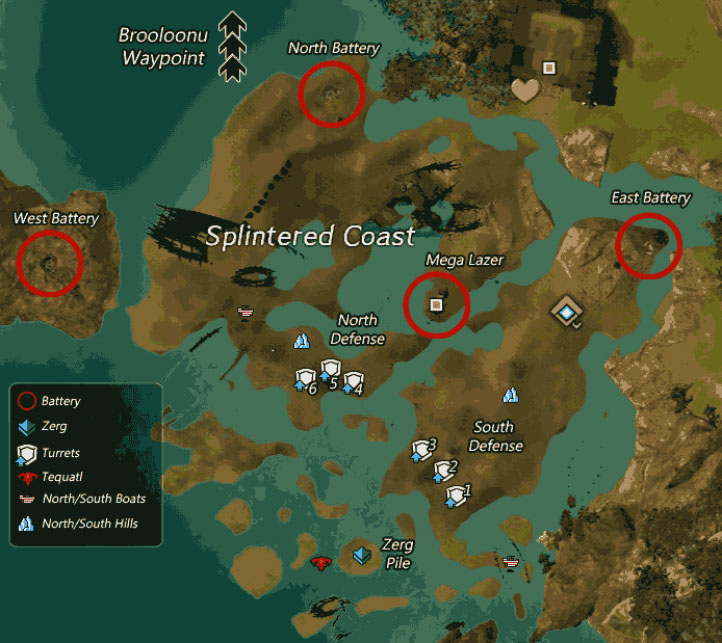 Defense Teams the first mobs spawn with 14:00 minutes left on the clock and then every 90 seconds.

Do not party up unless you are in a defense team, turret party, or the ERT. This allows us to spread out buffs to the most people.

Make sure that once defenses are set, everyone not on a turret or in the defense teams needs to be in the zerg or they will scale mobs

Teq can’t be crit! Warriors this means Banner of Discipline will not work! Don’t throw it.
If at anytime you become dead it is very important that you waypoint to Brooloonu Waypoint [&BNEBAAA=]. We will not stop to rez the dead.

Turret groups are divided into 2 teams, one in the South (1, 2, 3) & one in the North defense (4, 5, 6). All turret operators have access to the following skills when they hop on a turret:

South Turrets: Your job is to primarily cleanse and buff the zerg every chance you get using skills 3, 4, & 5. You will also be cleansing yourselves and you fellow south turrets as needed. if North runs into trouble there is a chance you will also be using you skill 2 to knock down scales.

North Turrets: Your primary job is to take out Tequatl’s scales by targeting Teq’s head and spamming your skill 2. If scales reach 20 a bone wall will appear and Teq will go invulnerable until it is destroyed. When skill 2 is on cooldown feel free to use skill 1 to help the zerg with extra dps. Cleanse yourself and your fellow North turrets as needed.

In order to ensure a smooth and successful Teq run Defenses are key to keeping our turret operators alive and the zerg buffed. Defenses are broken down into 2 groups called the North & South defenses and each defense consists of a 5 man boat and 5 man hills team.

North/South Boats: The boat team is responsible for keeping mobs that spawn in the boat from getting to our turrets. It is important that the boat team fights only in the boat unless they are kiting mobs away from Turret 1/6 or they are running back from the waypoint.

The Emergency Response Team aka “ERT”

The ERT consists of one 5 man party that essentially are there to save the day if something goes wrong at one of the defenses. For the most part the ERT will stay with the zerg unless needed elsewhere. The will also stay behind during the battery phase and clear fingers that spawn on the beach.

The Zergs job is to bring the party and dps to the fight. It is highly encouraged that you stick on your zerg commanders tag to benefit from the buffs the turrets will be throwing. Most zerg commanders will fight melee though if you need to hang back in ranged that is fine as well.

Warriors should always be dropping banners if they have them when they see lots of the zerg go down to failed dodging of the waves or Teq’’s ground stomp. Elementalists should drop Icebows and Fiery Greatswords every chance they get for added dps. All zergers should pick up any Ele weapons they see and use them, particularly skill 4 on both. Keep an eye out for the double number spot and if you find it call out in say chat so everyone can see the bubble.

If at anytime you become dead it is very important that you waypoint to Brooloonu Waypoint [&BNEBAAA=]. We will not stop to rez the dead as we need all available dps on the dragon. 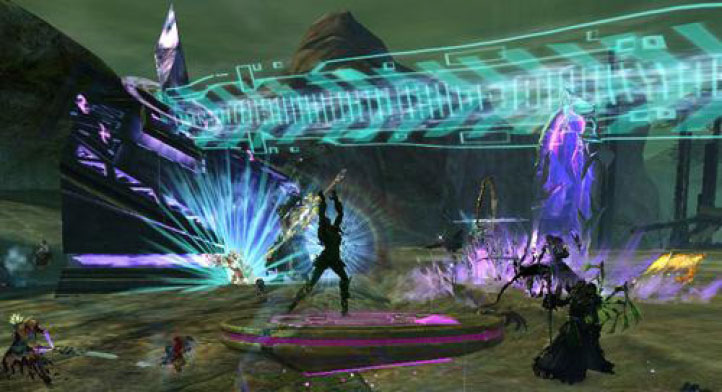 After the zerg beats on teq for a while (get Teq’s health to 75%) Tequatl will become invulnerable and fly off. This is the start of the battery phase. At this time the ERT will stay back to clear fingers while everyone else will spread out to defend the 4 batteries.

Remember to push/pull/kite/hug/scare mobs off the battery. At no point should the defenders ever fight on the battery.

Megalaser: As soon as the champion Krait pops up it needs to be dealt with asap. Rangers this is your time to shine with entangle! Any kind of pull or stun works good here. Champ krait spawns just behind the North Turrets.

East Battery: East needs to kill and snare Risen Abominations (A-bombs) before they ever get close to the battery. If they reach a certain range they will explode and do massive amounts of damage. A-bombs should always be first priority

North Battery: North you have one mission in life and that is to camp out on and stomp every grub hole that spawns! Grub holes must always be the first priority. If they are left alone they will spawn risen grubs and those grubs can decimate the battery in mere seconds. If a grub spawns it needs to be taken out asap.

With 30 sec left in the battery phase you commander will call out for all turret operators to head back to their designated turrets. When Teq lands all turrets will spam skill one while targeting his head.

Depending on how the batteries are faring the call to run back will be around the 20 sec mark. At this time everyone including the defense teams need to head in and stack on you commander. Watch for calls on when to drop fire fields and blasts as well as might buffs. When Teq lands burn baby burn! With luck the zerg will do enough dps to push Teq right into the next battery phase. If dps is lacking, defenses will be told to head back to protect the turrets and the zerg will remain in melee range until the next phase happens or the dragon is defeated. Watch for calls for consumables and as a general rule of thumb save them until the very last burn or unless told otherwise. 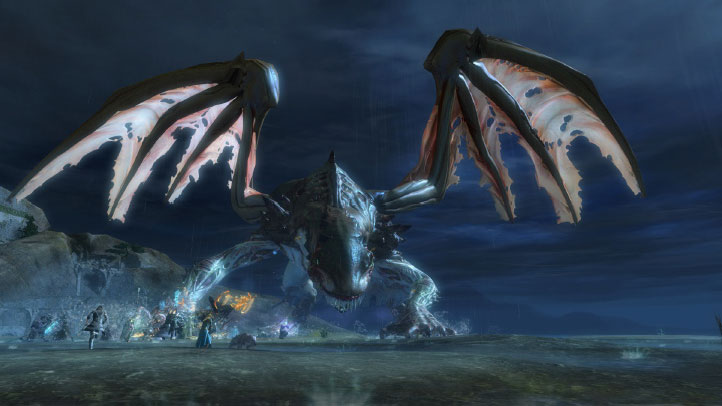