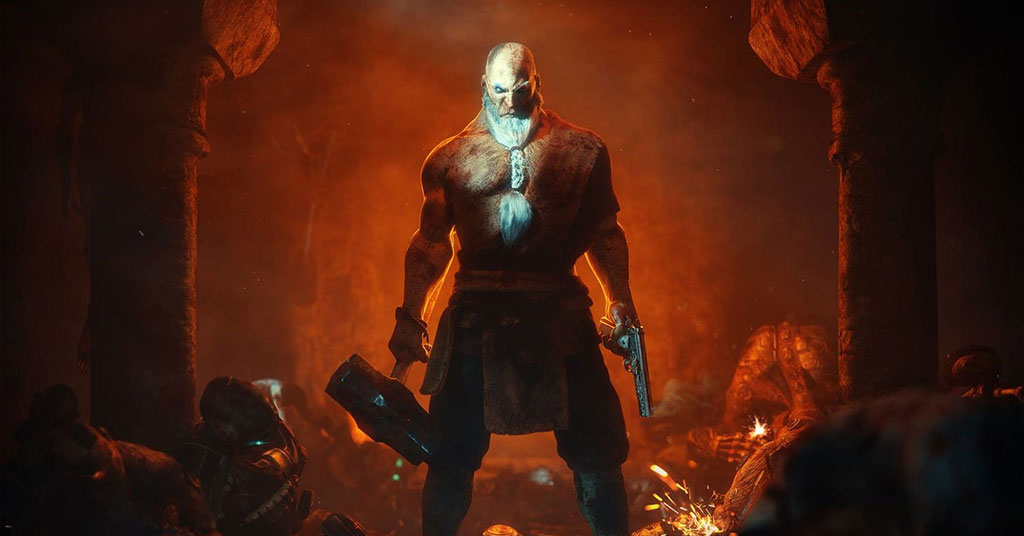 If I’ve anything to say, watching John Wick, it is to let deadly super assassins retire in peace, and never kill the dog. Thankfully Sobaka Studio’s new beat ‘em up doesn’t have a dog, Due out Spring 2017 for PC and published by Gambitious, it does, however, deliver a carnal level of action as elite operative, Vasily, struggles to shake of the attention of his former employers.

Inspired by the simplicity of early beat ‘em up games, Redeemer is an unabashed ode to the action heyday of 1980s’s film-making. It typifies an era of uncomplicated entertainment, when heroes didn’t need superpowers to perform unbelievable feats, just a rippling torso and an inhuman tolerance for violence. This top down action brawler puts the player in control of Vasily, an ex mercenary who fits all these tropes and is up against a vicious ex employer, just because he is still alive. 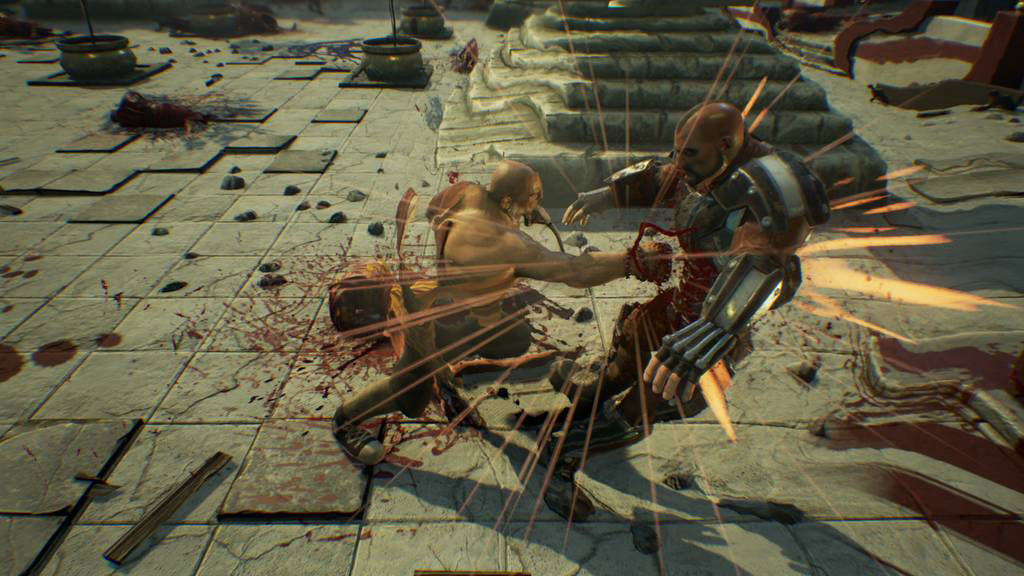 Redeemer’s early environments, shown at EGX Rezzed, make fantastic use of the Unreal 4 engine, seamlessly switching between top down and third person views as Vasily casually eviscerates his foes. The hand crafted exteriors and the dank monastery corridors easily reflect the dark world that has come back to haunt our hero. Characters are reminiscent of a gritty visual novel, with tones that are subdued until a torrent of red sprouts across the screen. Redeemer is not a beautiful world but it still manages to look fantastic on screen. 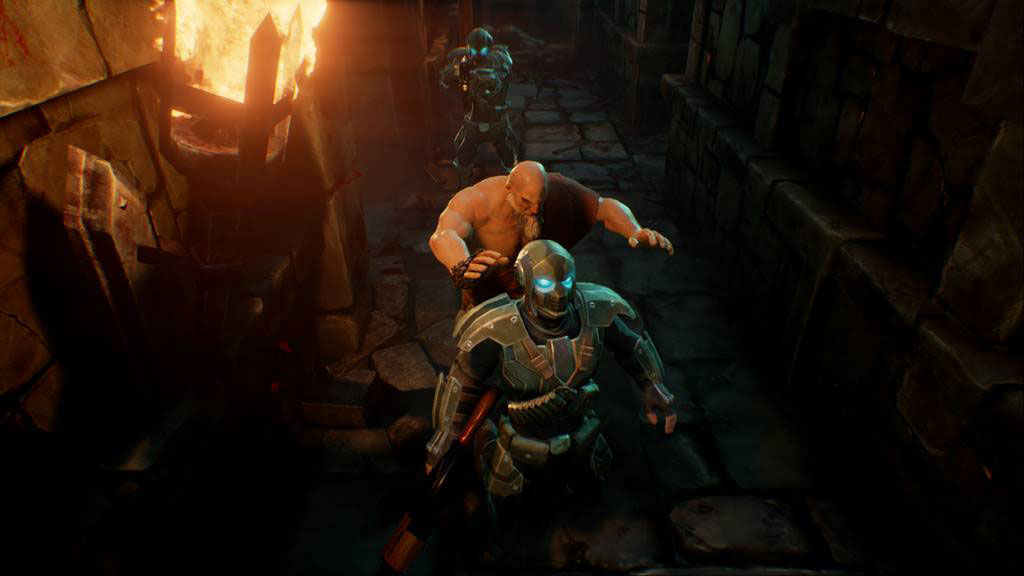 The brutal hand to hand combat that features in Redeemer is equally well presented, surprisingly easy to pick up, and relatively uncomplicated to master. Mouse buttons are primarily used to trigger Vasily’s range of instant and charged attacks, allowing players to quickly master simple combos. Combat is well animated and feels present in the world. At times, Vasily seems to flow across the screen, dishing out volleys of punishment and displaying the same kind of acrobatic prowess that reminded me of the best parts of God of War and the Arkham franchise. The deliberate use of environmental elements helps to enhance this, serving up a smorgasbord of death as Vasily smashes down doors, throws rocks, and crushes faces on the surrounding furniture. While Sobaka could have built an insanely complex fighting system, this doesn’t fit Redeemers design philosophy. Instead, once you have had enough of getting your hands dirty, you can pick up a weapon and get cracking.

At least twenty weapons are currently available in Redeemer, providing several ways to process your opponents. These are controlled in a similar fashion to unarmed combat, and ranged weapons include handguns, shotguns, and automatic rifles. Melee weapons vary from electrified batons, to flaming axes, with the sheer variety of armaments, effectively keeping players from ever getting bored. Raising combat above the realm of mediocre skull bashing, Sobaka provides different weapons to suit specific situations. Melee weapons prove particularly effective when playing stealthily, luring some very aggressive guards round corners or sneaking up on them with a hatchet. Ranged rifles, however, can be invaluable when used against certain boss fights. 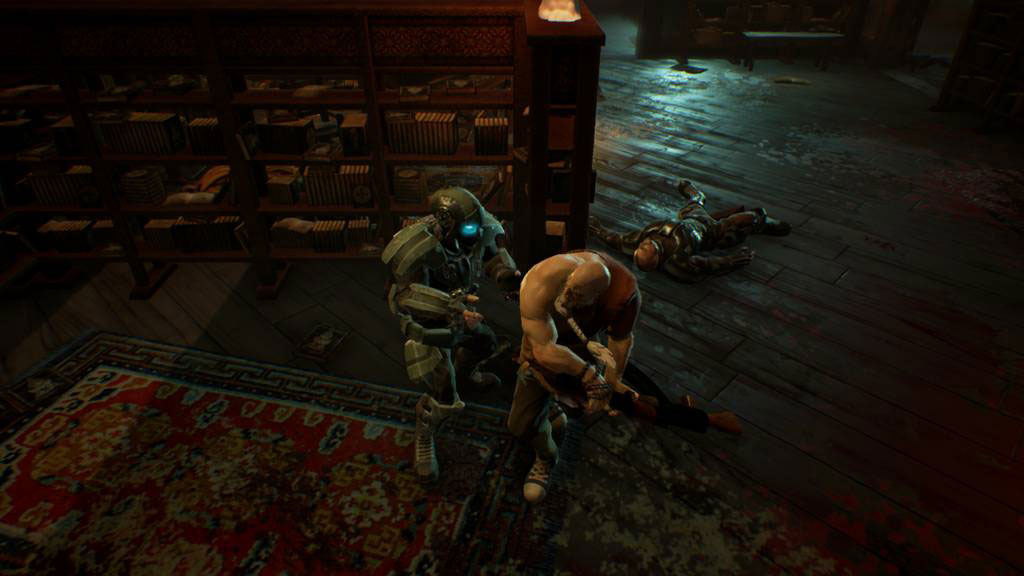 When I got up close with Redeemer it became clear that the simplicity of Redeemer’s concept belies the complexity of the game. My initial astonishment at the depth and variety of violence on show quickly turned to the challenge of getting through the game. Violence only gets so far and players need to make use of the abilities Vasily has, from stealth takedowns, to particular finishing moves or face being quickly spotted, rounded up, and beaten into submission. Even action heroes can only take so much abuse. Redeemer doesn’t look to reinvent the top down genre, but it doesn’t pull any punches and proved to be one of the surprises of EGX Rezzed 2017.

After being blown away by Redeemer, I got some time to chat to Dmitry Kachkov, the lead developer at Sobaka Studios about the game.

REDEEMER is an intense Brawler where you will punch, hack and blast your way through enemies using fists, hammers, fire arms and even the environment. It grabs the genre by the throat and drags it into 2017 in brutal style by adding a deep melee combat system and numerous unique types of kills. Redeemer is the brawler for those who love brawlers and have been waiting for a modern take on the genre!