Here at Gaiscioch we are busy recovering from our latest charity stream. We had a fantastic response to our Extra Life event and all we really did was sit and play video games. All our supporters do the real good. Games have an amazing power to do good and it has not gone unnoticed by charities. One of the more regular names on the gaming calendar comes from the team at SpecialEffect. SpecialEffect is a charity set up to provide access to video games for everyone, whatever their ability. They can regularly be seen at UK gaming conventions showing off some incredible technology from chin controllers to voice activated games. With so much good will after our own event, we sat down with Mark Saville, part of the SpecialEffect team to talk about this amazing organisation.

Could you introduce yourselves for our readers and tell us a bit about what you do at SpecialEffect?

I’m part of the small Fundraising and Communications team here whose privilege it is to shout out to the world about the magic that our therapists and tech experts are working with people with disabilities.

SpecialEffect was started ten years ago by our founder and CEO, Dr. Mick Donegan. He’d spent many years of helping very severely disabled people, and was hearing time and time again that they were desperate to play games - not just to have fun, but to interact and be included with their family and friends. He was amazed to find that no-one else was providing the kind of personalised support that’s vital to the success of our work, so he started the charity.

Are there any specific types of technology that you use frequently or indeed pioneered?

We’re pretty much led by the abilities of people who ask for our help. Sometimes we might see someone who’s lost the use of a hand, so we might recommend a suitable one-handed controller for the games they want to play (that can be a challenge in itself), or we might see someone with muscular dystrophy who needs a combination of voice control, foot switches and low-force mini joysticks to boss their titles. Having said that, we do have a great deal of experience and expertise in eye-controlled tech, and part of our work overlaps into helping people who’ve had a sudden and serious injury to gain independence through eye-control.

Ha! These days I get to sit in with everyone else’s fundraising marathons, and you get to know when the wall will hit, and how to plough through it. The feeling of elation when it’s all over is a real buzz though.

What was the response like when SpecialEffect began raising funds?

The response from traditional funding bodies was cool, as gaming was going through a particularly bad phase of publicity at the time. But over the years the response from the gaming community has been incredible. It's a community and industry that immediately gets what we're trying to do, and many individuals and companies have responded with support for our work in many ways, from running marathons to donating revenue from game sales.

What has been your most memorable experience so far?

Wow, that’s tricky. It’s always a privilege to bring the magic of gaming back into people’s lives, but there’s also a real freedom in offering that kind of life-changing support without having to charge anything for it. If we told people they’d have to pay for our help, we’d be putting up barriers, and that’s not something we want to do. It’s a crazy business model – our equipment is expensive, many of our staff are specialists and the one-to-one work is very time consuming, yet we don’t charge a penny. But thanks to the amazing support we’ve received so far, our doors are still open despite a huge rise in demand.

How much effort does it take to organise and run events like Gameblast and One Special Day? How many people are involved?

We have a team of three or four people who throw themselves into the organisation of these events, and much of it is about getting the momentum going. We do that through our social media, exhibitions and networking, and once the word is out there it’s all about the lead up to the event itself. Interestingly our first GameBlast in 2014 was organised and run by just one person here, and the only costs were the time spent, plus some leaflets and a couple of banner stands. It ended up raising around £70,000 which was beyond wonderful as we could tell everyone that virtually none of that went towards organisation – it all went towards helping people to game again.

Does running and promoting a video gaming event differ from other events?

That really depends on the event. For example we’re in the middle of organising a classical concert as a fundraiser and the networking for that is, er, vastly different.

Are events like Gameblast essentially the evolution of the telethon?

Yep, definitely. I could point you to the very table in our local pub where our fundraiser and myself first thought that the event could be the gamer’s equivalent of Children in Need. It was about the third pint in, I think.

Here at Gaiscioch we find that when we stream we try our best to be as inclusive as possible, this can make some games more suitable than others. Do some games work better than others for fundraising or are you game for anything?

Anything. You’re right about a careful choice of games, and also we find that the banter and personalities are a draw, along with any raffles, giveaways, forfeits, etc. It’s all about having as much fun as possible.

We’ve seen SpecialEffect branch out beyond gaming marathons into more traditional real world events like marathons. Do you think we’ll see more charities starting to creep into the realm of video games in return?

It’s already happening. Several large charities are already running gaming marathon events, for example, and fair play to them. GameBlast is still the UK’s biggest gaming marathon weekend event though, and it has the direct appeal for gamers to help others less fortunate than themselves to game as well.

For anybody planning to take on 24 hours of video games do you have any survival tips?

Loads. We’ve put together a document at http://www.specialeffect.org.uk/gameblast16/Gaming%20Marathon%20Pointers%20V2.7.pdf which covers a whole bunch of stuff.

What’s next for SpecialEffect?

Our ultimate aim is for everybody, whatever their disabilities, to have access to video games. We’re getting there one person at a time ?

You can find out more about Special Effect and what they do at http://www.specialeffect.org.uk/. 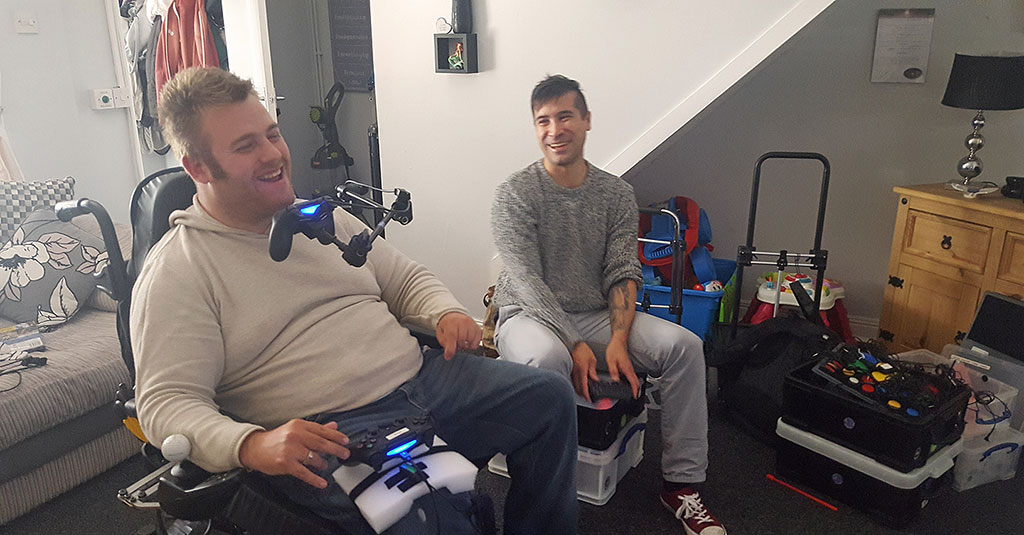