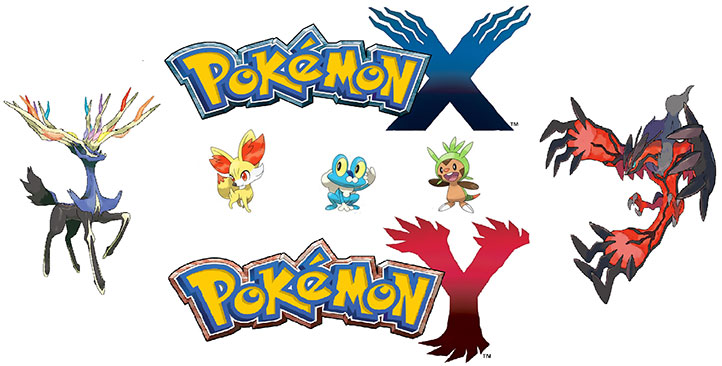 Pokémon X and Y are the latest games in the popular Pokémon series. This generation was exclusive to the most recent Nintendo 3DS and 2D handheld consoles.

Like previous games, players choose a starter Pokémon (Fennekin, Froakie, or Chespin) and then are sent on an adventure through the Kalos region. Since Pokémon X and Y have a new engine, the graphics are substantially improved over previous generations, and there are fun new features. Your favorite Pokémon, like Pikachu, are back for this adventure along with even more new Pokémon and an entirely new class, called the Fairy type.

Nintendo created a new engine for this Pokémon X and Y, and the improved graphics show it. For those who enjoy the 3D aspects, the battles look fantastic. I usually hate the 3D part of games since that feature tends to give me a bad headache, but the visual detail is so terrific that I turned it on for this game. The developers added substantial detail to both the battles and the world backgrounds, and the artists created some beautiful effects and backgrounds.

A New Region and a New Story

The new region, Kalos, has a distinctively French feel. The main city even has a monument that looks very similar to the Eiffel Tower.

The stories are the same in both games, and the only real differences are the Legendaries and  the 19 other Pokémon that are specific to either X or Y. This is designed to a. encourage trading and b. of course, sell more Pokémon games.

The storyline has never been the strong suit in any of the generations, but this generation’s story is more cohesive, and the overarching plot makes more sense, as a result. There’s no semi-creepy ending like the one we got in Black and White, happily. The entire story even manages to pull off a couple of touching moments for those who don't have hearts of Steelix.

718 of Them!Nintendo added 49 new creatures to Generation VI. Yes, we're up to 718 Pokémon to collect now, and many of them are just as adorable as their predecessors. Some can only be categorized as “so ugly; they're cute”.

Pikachu, Caterpie, Simisear, Simipour, and Simisage show up very early in the game to help you get a great start to your team. As always, explore every place you can—you’ll find berries, potions, and other treats along the way. Challengers will cross your path periodically to test your team. Enjoy the new visual effects during the battles.

There are some fun new features in this generation. There is the multi-player Player Search System. This allows players to trade, battle, and connect over the internet and locally. The Wonder Trade gives you the option to trade Pokémon with random players—you’ll chose the one you want to trade, offer it, and receive a random Pokémon in return. You never know what you might receive-- I was given a Japanese Ditto in one trade. The GTS is still available if you want to trade for a specific Pokémon.

The PSS allows players to enter random battles, and the Super Trainer will let you train or retrain some of your stats. Types and natures are still the determining factor on stats, but retraining gives players alternatives in building a great team.

A few of the Pokémon-Amie mini-games are cute but provide limited interest. If you want to build friendship quickly with your Pokémon, especially to evolve an Umbreon or Espeon, definitely play them with your Eevee.