Hands on as the Hordes Descend in Orcs Must Die! Unchained 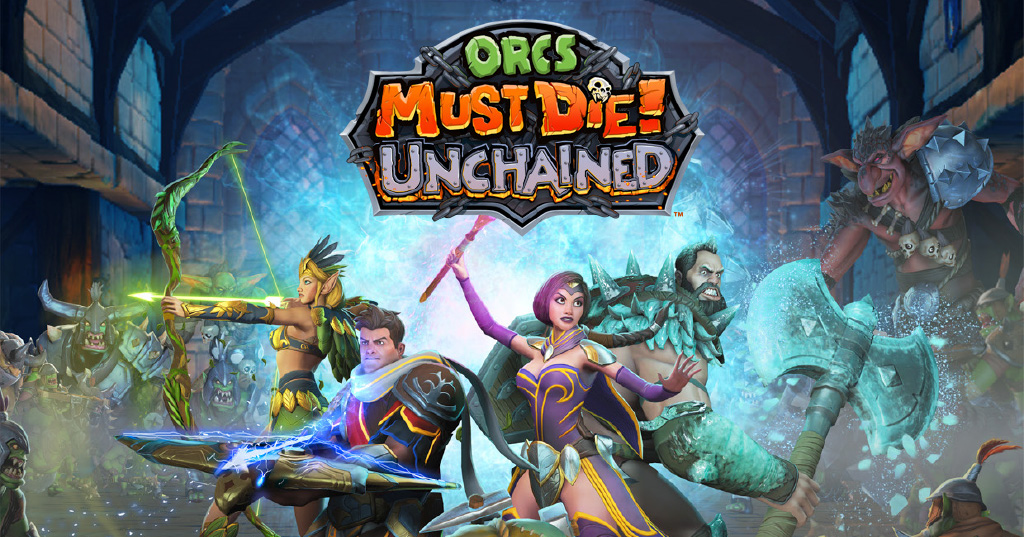 For over four years, the Orcs Must Die! franchise has rampaged across our screens, assaulting players with puns, quips, and a light spot of Ogre decapitation. Now, with the latest incarnation in the franchise about to spawn, I braved Robot Entertainment’s own dungeon and met with COO Harter “Harterfaster” Ryan, to take a closer look at the Orcs Must Die! Unchained.

As I write this, Unchained is on the cusp of open beta and due to launch later in 2016. It is an online, free to play game that fits neatly into the tower defence genre. Following on from previous Orcs Must Die! Games, It once again pits players against hordes of Gnolls, Ogres, and, of course, Orcs as they attempt to tear through your defences. Players can employ a multitude of traps or just bash heads to protect their own rift forts, while a series of increasing difficulty Orc assaults come crashing down on it. Anybody familiar with Robot Entertainment’s previous iterations will be accustomed with this concept, but the developers have taken the core principles of Orcs Must Die! and introduced some monstrous enhancements.

PvP is a difficult thing to do and the world doesn’t need another MOBA. There are plenty of fine 5v5 MOBAs out there. What we wanted to do was create a 5v5 PvP experience that was different which means we have offense and defense with heroes that can specialize. We wanted to make sure that we kept things interesting, different, and balanced. 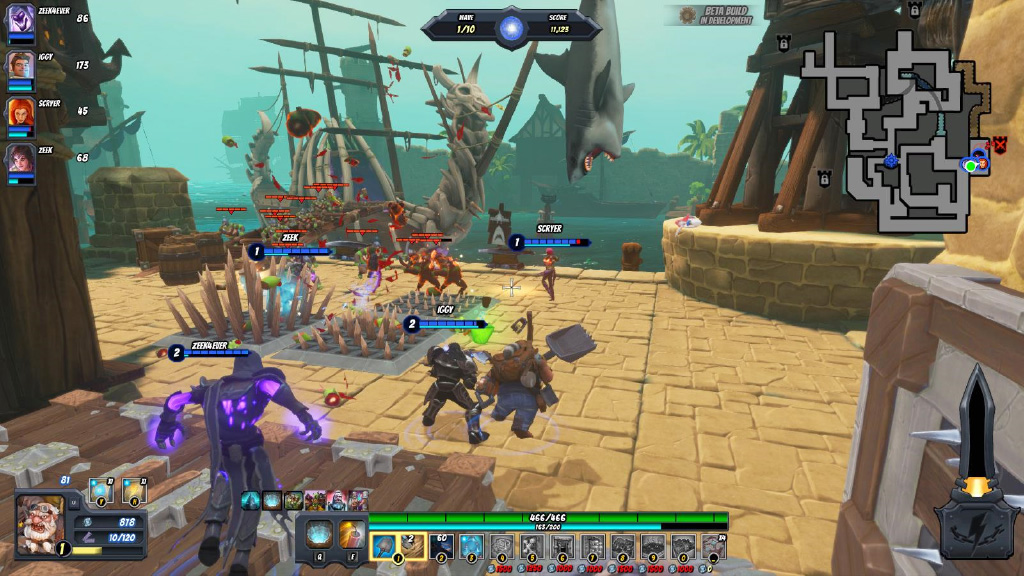 This focus on creating interesting and balanced competition took a significant amount of time to get just right. Orcs Must Die! Unchained has undergone some significant changes over its development and as release approaches the team has shifted focus as the latest patch 2.8 demonstrates. Harter explained that:

We spent a year and a half developing that (PvP) but it turned out it wasn’t the entire experience that people were expecting from Orcs Must Die! That’s the big migration pass now. People can jump in now, play the tutorial and start playing straight away with their friends in PvE.

It turned out that as enjoyable as PvP is, having fun is more important than creating the latest e-sport. Harter confirmed that the team at Robot Entertainment has no plans to launch straight into e-sports and have been focused on bringing a well-rounded game to fans. With that, I got to experience the latest 2.8 patch just before it went live, cutting a path of destruction through the Frostbite and Shark Island Maps.

Shark island is the newest of these two encounters and is a fairly high level encounter. This map is anchored just off a rickety pier and surrounded by shark infested waters. Defenders can set traps, crush skulls, and wind their way through a maze of corridors as Orcs flood through them, in typically enthusiastic fashion. It is an extremely entertaining encounter with lots of unique mechanics, from the local shark population to new movement abilities that suit the tone of Orcs Must Die! perfectly.

Frostbite is a simpler affair and available at lower levels. Set in an artic castle, it was easy to understand and functionally similar to previous Orcs Must Die! games.  While much of the PvE content doesn’t change the core of the game, Harter described why PvE in Orcs Must Die! Unchained is still just as fun as its predecessors and why we got chewed up by Shark Island.

It’s a really simple concept and we’re trying to keep that at the core of the game. Even with the new metagame and the PvP, if you aren’t having fun then you aren’t going to stick with it. We want to make sure that players really have a great time and come back. It has to be fun, and it has to be challenging, and the challenge has to scale as players progress.

Harter also explained more about how the game intends to keep players coming back, creating more to do and a long term investment in the experience.

The second game had some rudimentary progression options. You could unlock specific upgrades and change some options in the loadout. This gave you some variability but you couldn’t upgrade your hero’s innate power by levelling. In this game the player has lots and lots of options. For example, you’ll see crafting materials drop during a game. After a match you can choose how to use those crafting materials. We think that sort of meta is the glue that binds people to the experience. You’re having fun in the game, you are making interesting decisions outside the game. Altogether it works.

From level one, an array of torturous obstacles are available to defenders. Spikes, barricades, ice pits, arrow walls, wall grinders, and wall blades are some of the more visceral fates that await Orcish invaders. These traps are common to previous Orcs Must Die! games but as players hit level 25, things really start to get interesting. New customization options unlock and traps can be upgraded. Using materials dropped during matches, new traps can be crafted to suit particular play styles while the Ballista , in particular, has an ingenious array of new implements to impale invaders. 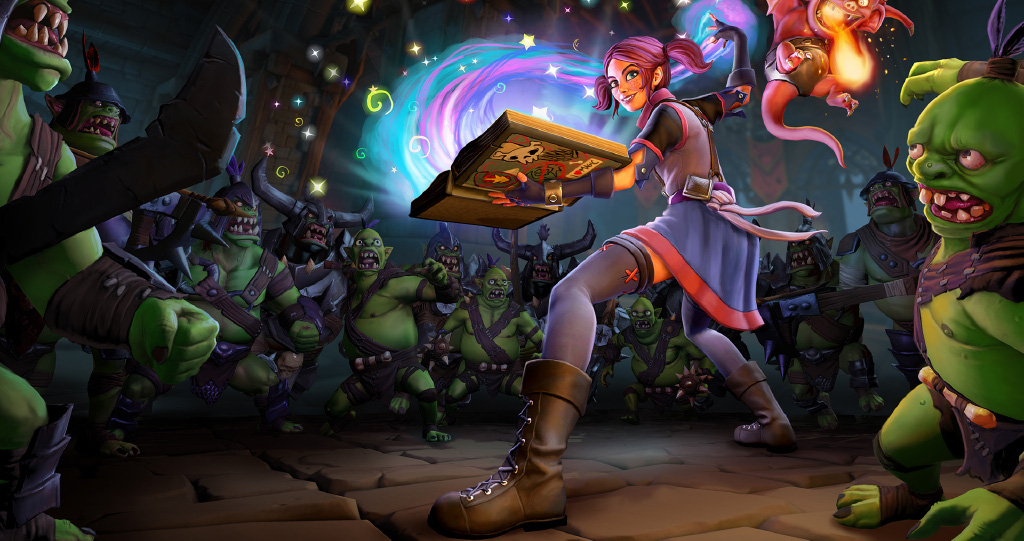 Character variation is similarly effective at keeping things interesting. Twelve eccentric, bright, and quirky characters make up the launch roster, including the popular War Mage and Sorceress. Each of these brings their own capabilities and marks a significant step up from the pair of playable roles in Orcs Must Die! 2. A few basic attacks and an action set that can include eight traps provides an adequate breadth to each of these characters without becoming overly cluttered.

Harter described a couple of the more unique additions to the Orcs Must Die! Roster.

I think one of the more interesting characters is the Prospector. He is a support character that can set a trap which puts a tunnel down, allowing teams to rapidly move across the map. He’s also got a dynamite stick that he throws. That has a really nice area of effect skill.

Also Zoe, who is the Apprentice, has a book of magic you can rotate through, including a great area of effect skill that looks like fire, just going off everywhere. Those two are really cool.

With such a robust progression system, balancing could be a fairly daunting process for the development team and the community. Thankfully, after a year and a half experience with PvP balance, the team at Robot appear to have a realistic approach to this. Harter, explained that,

We’re not afraid to balance and allow the players to develop their own meta on the PvE side of things. As for the PvP balance, we make sure that’s normalized. We don’t let you level up and bring in a bunch of upgraded traps into a match, making it a very unfair experience. We try to keep those components very separate. The heroes within PvP are balanced against each other and within PvE, we are less concerned about being fair to the computer.

This realism is understandable when you take into account the player experience. Harter confirmed that,

The team at Robot has always been proactive at engaging with a well-established community and the open beta patch is clearly aimed at keeping the community playing by getting more players into the action. The queue consolidation, a normalization of difficulty levels, the addition of AI compatriots between levels one and ten, all act to funnel more players into matches faster. The result should be a frantic kaleidoscope of fire, frost and Orc parts as Orcs Must Die! Unchained passes PC Open Beta and reaches PS4 later this year.