Mark Jacobs Discusses The Nuts and Bolts of Camelot Unchained 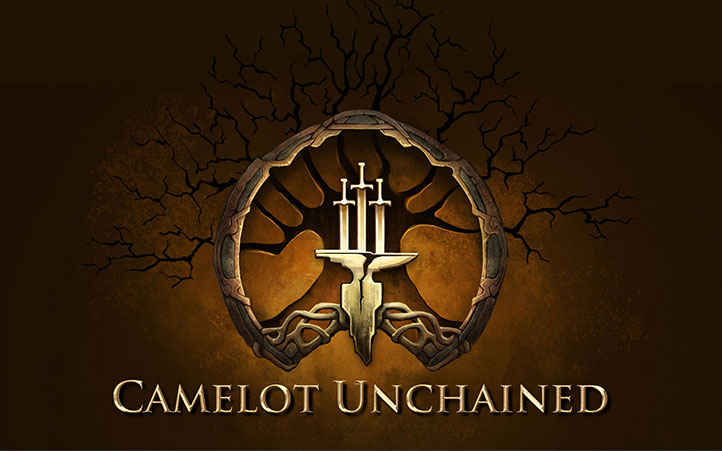 In our previous interview with Mark Jacobs, CEO & Founder of City State Entertainment, we looked at a broad perspective of gameplay. This time we decided to get a little more into the technical aspects of what makes this game work. We were fortunate enough to reconnect with Mark for some nitty gritty detail on the upcoming MMORPG title, Camelot Unchained.

Will there be both genders available for all races/classes?

Probably. We’ve talked about the possibility of gender-locked races, but not gender-locked classes. For example, the Valkyrie race was written as being a two sex race, but it is one that would be a fit as a female-only race if needed/desired. Thus, as of now we don’t have any races that are gender-locked, but it remains a possibility.

Will there be the ability to customize the look of the characters? IE: height, weight, hair color etc.

Yes. There needs to be a certain amount of customization of appearance in Camelot Unchained™, but as I’ve said since even before the Kickstarter begun, we are not trying to surpass the kind of character customization seen in some MMORPGs such as City of Heroes. All those sliders, hairstyles, etc. come at a cost, both in rendering time and studio development time and we are not willing, right now, to commit to that level of customization. So, players will be able to customize some aspects of their character’s appearance, but certainly not in the kind of quantity and quality of something like Black Desert.  Our focus is on delivering a game that handles large-scale battles, not large-scale boob sliders. ?

Is there anything you are would like to highlight in the character creation system?

The Banes and Boons system is going to be a major boost to character customization and will epitomize the concept of “Choices Matter” that has been at the heart of this game’s Foundational Principles. 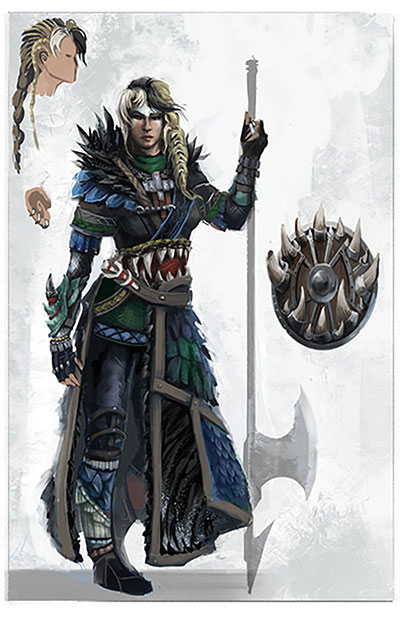 Are you using a 'homegrown' solution or Middleware solution and what total number player cap are you looking to attain?

Almost all the tech currently in Camelot Unchained is homegrown. At the present time, the major exceptions are Nvidia’s PhysX (server side), HBAO+ (client side) and Wwise (sound engine). The core rendering and server engines were, and are, being written from scratch. As far as player cap, that is TBD but we expect our servers to handle more load than most other MMORPGs because of the lack of the kind of NPC traffic/CPU usage in Camelot Unchained.

Will there be any 'instancing' involved and if so, how will it be utilized?

Almost none. The only instancing that we have said we are committed to might be with the starting cities (if performance is an issue) and with the new player training areas.

Will characters obtain levels, and if so, what is the projected cap, and how will users attain those levels?

Not levels in terms of traditional leveling such as Dungeons and Dragons. You will improve your skills and they will level up but not in the “Level 15 achieved. Ding Gratz!” way. Camelot Unchained is a usage-based game so if you want your skills to increase, all you need to do is use them. 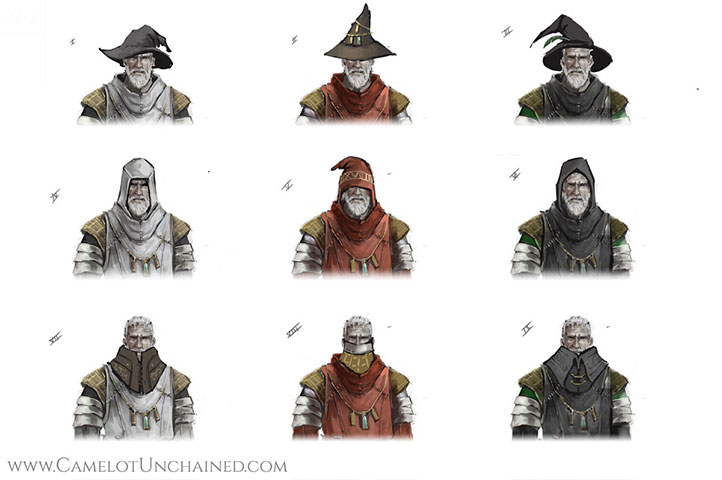 Will gear play a major factor, and if so, how will it be obtained? Will there be the ability to customize/personalize and further upgrade via a rune/shard type of mechanism?

Gear is always a factor in these types of games (otherwise why have it?), but we have said from the KS+ that we don’t want gear to play the same kind of role in our game that it has in most MMORPGs. As to how you will obtain it, all gear except that which is worn by new characters, will be crafted by players. As far as upgrading it, there will be multiple ways to do so.

I noticed that the engine incorporates day/night cycles. Will there be other environmental effects that affect gameplay? Such as intense wind or reduced visibility etc.

Yes. Wind already plays a factor through a spell component and we expect that other environmental effects, especially such as fog, will also come into play in the game. 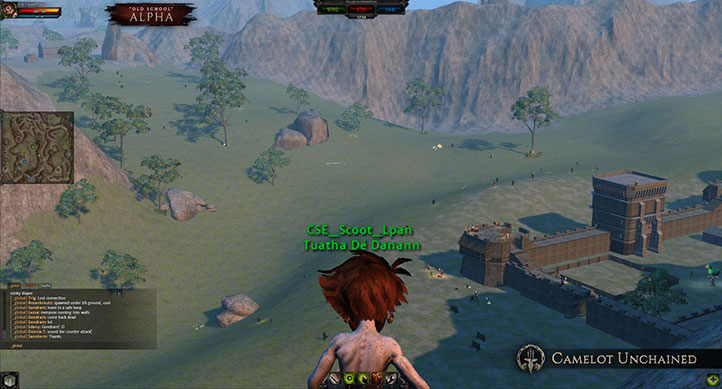 Will there be siege engines/weapons as well? And if so, what kinds are envisioned?

Yes. Expect the fairly typical siege engines such as catapults, trebuchet, etc. but also except that we will have some very unique siege engines, too. Luch-a-pult is confirmed! ?  (Coming as the Luchorpan, a leprechaun like character.)

Will there be mounts and mounted combat? Flying mounts possibly? Vehicles, ships etc?

Mounts are on the table, but no decision has been made as of yet. In terms of flying mounts, no. The only way we could add flying mounts to the game would be if we also added aerial combat to the game and as of now, we have no plans to do so.

Will the 'world' be static as in all combat takes place in a central large area, or will it be broken down into regions?

In the beginning of the game there is no large central area. Here’s a video presentation I did which describes the setup quite nicely - https://www.youtube.com/watch?v=OM-3YcE_Vso 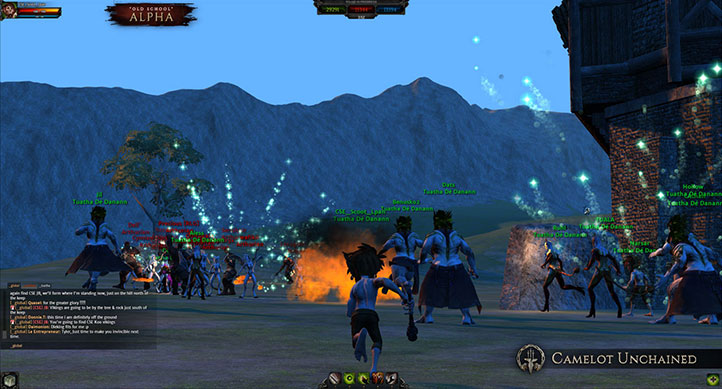 Will there be any pve content, or is this intended to be strictly pvp only?

There is plenty of PvE content in the game, but there is no PvE leveling of skills for the combatants. For example, we have a full crafting system which some people consider PvE. Also, the place called The Depths™ has creatures that must be killed. We also have guards for buildings and critters that need to be killed and skinned to get crafting materials. But, players will not level their combat skills nor need to have to do quests in order to level their characters.

Yes, we will have guilds. As to how it is going to be envisioned, that will be made public down the road a bit. As to guild buildings and conquered land bonuses, yes.

Will there be an in-game auction house or market?

There will not be a central auction house in the game, but there will be main markets in town and there may be a commodity exchange for raw materials.

Will there be a focus on crafting, and if so, how is that going to be implemented? Will there be official micro transactions?

Yes, a huge focus on crafting. As to official RMT, no. What we have said from the beginning of the project is that if we are going to be a subscription game (and we are), that we are also not going to “nickel and dime” the player and/or treat them as “walking wallets” as some other games and developers have done in the past. We reserve the right to charge for things such as server moves, additional slots (right now every Backer gets a minimum of one slot per class plus an additional slot) and other such services but RMT, no. 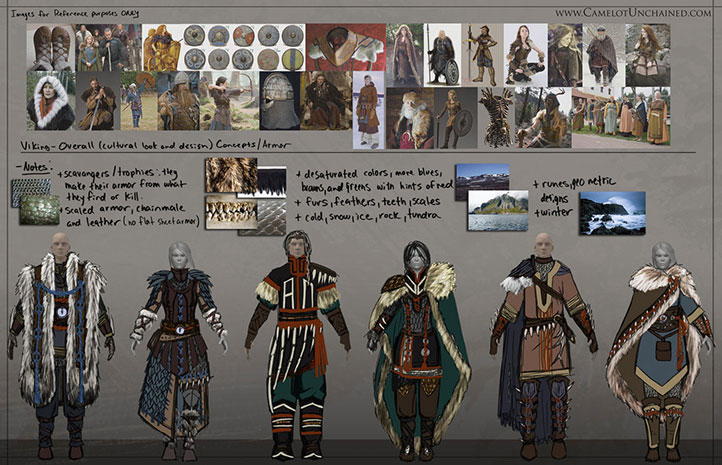 Is the engine using the latest directx and/or opengl, and what will that mean in regards to the bottom line requirements?

We are committed to using DirectX. In terms of the specs for our game, we are targeting what would be considered a mid-range build. You don’t have to have a state-of-the-art PC to play Camelot Unchained, but if your video card is 6 years old, you might want to upgrade it. ?

Is the engine's graphical pipeline able to easily support changes in shaders or physics etc, to allow for potentially quicker changes, fixes or content updates, should the need arise?

Of course. During the BSC Days we described how our pipeline is set up so that anybody can do a code/asset drop into the game while it is running and how it will be shared even with everybody
who is connected to the game. Some things need a server restart of course, but people have been surprised at the things we can already do with the game running.

Last week Andrew added Nvidia’s HBAO+ library which gave us, unsurprisingly, ambient occlusion. This week he is working on getting water and their WaveWorks library into the build as well. We already have a full particle system, shadows, foliage (early pass) and server-based physics using Nvidia’s PhysX. And, of course, more is coming.

Will the environment be destructible in any way?

Yes. You can burn down other people’s structures, trees, etc. Right now there are no plans for sapping under people’s defenses by digging through the terrain though.

What are the low/high end requirements projected to be?

Still mostly TBD as we move through Alpha and into Beta. But, as per above, you will not need the latest and greatest PC from Alienware in order to play the game.

What platforms are initially targeted?

What does your engine incorporate or utilize that differs from using a 3rd party solution?

We are building both our client and server engines to focus on large-scale battles. This means that it is more focused on rendering relatively high poly models and particle effects, but is less focused on delivering the kind of graphic fidelity and bells and whistles that some ‘AAA’ games are currently capable of rendering. It also involves the design and art team making smart choices in terms of our use of own poly/effect budget. We need to deliver on a game that can handle large-scale battles, that’s what our Backers donated for and if we have to cut the poly/triangle count on models, keep a close on the special effects budget, etc., that’s what we need to do.

Several large scale mmo's in the past have suffered severe server overload due to unexpected or underestimated player counts, what steps have you taken to avoid that with Camelot Unchained?

The benefit of being a Kickstarter-backed game is that we will already have our core audience onboard before the game launches. Also, because we are not trying to be a game for everybody (lack of PvE leveling, hard choices, etc.) we don’t expect the kind of additional launch day flood that other games have gotten.

What steps have been taken to discourage hacking or cheating?

Putting physics on the server is a huge game-changer for an MMORPG. As such, we won’t rely solely on anti-hacking tools on the client to protect the integrity of the game. So, even when hackers figure out how to do things like decrypt our packets or play with the client’s memory, the server will still act as the all-power arbiter of all things important. Thus, you might be able to hack your client you so think you are suddenly 300 yards from where you should be but the moment that the client tries to update, the server will put you right where you should be. It will also flag your account as a possible hacker so that our CSRs can look into it. ?

Will the game be able to incorporate user 'mods'?

It already does. Here’s a video from Andrew that describes our approach - http://camelotunchained.com/v2/making-a-game-out-of-the-web/. We currently have a very small but active community who are working on mods for the game.

Special thanks to Mark Jacobs for taking the time to answer more questions about the highly anticipated game, Camelot Unchained. Be sure to keep an eye out for the latest news here: http://camelotunchained.com/v2/