GreedFall is at its core an action RPG with story. Like other action RPG games in recent years the combat will require the use of some active dodging. Or in GreedFall’s case the use of dodging or blocking. This title from Spiders, published by Focus Home Interactive, features a world roughly equivalent to the great age of sail. The setting is thus similar to the 16th through the 18th century, but with some magic giving the rituals and customs of religion and tribe far more than merely social impact. Given the presence of companions who fight with you, you could consider it more of an AA mix of Dragon Age with The Witcher. It has frequently been compared to those two games. Which fits, as it is just a smaller studio making something that blends the two styles quite nicely. You will start in your home in the city of Serene, with plans to sail to Teer Fradee. You have two goals there, diplomatic ties to the other nations and the native tribes, and finding a cure to a plague known as “The Malichor.” 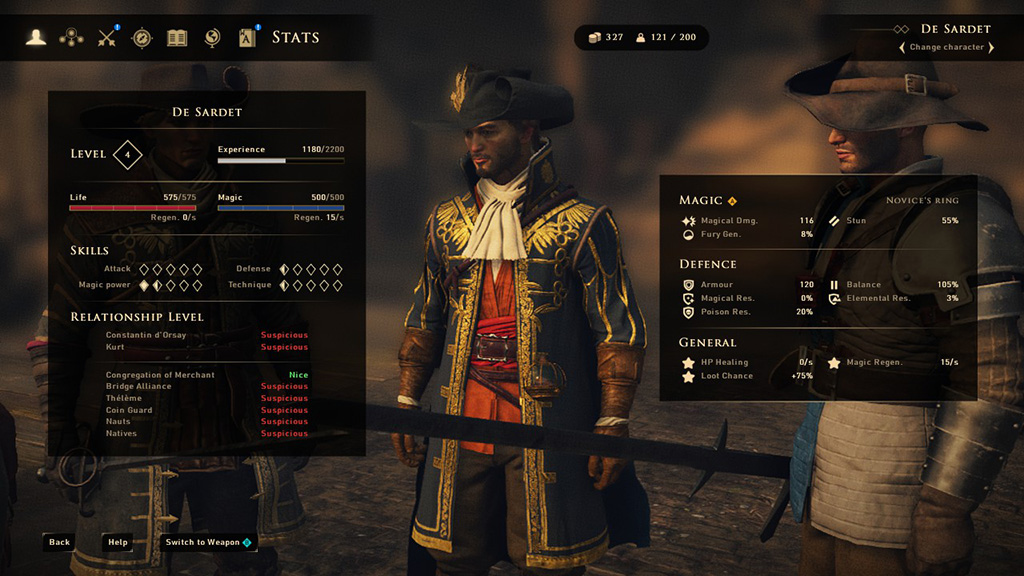 Let’s start with the basic character screen. This gives you a rough overview of your power, companion and faction relations, and some specific stats. GreedFall will allow you to improve your relations with the companions and factions by doing missions for them. In each case improving relations comes with rewards. For factions those are mostly items. Companions will be covered in more detail later.

The stats that aren’t fairly intuitive here are Stun, Fury generation, Balance, and Loot chance. Stun is your ability to knock opponents off balance, whether just disrupting them slightly or fully knocking them into a helpless state for a moment. Fury generation is a boost to how fast your combat ‘fury’ builds, which allows for strong special attacks. Balance is a bonus of how resistant you are to Stun from your foes. Loot chance is a multiplier to the random chance of getting better loot. 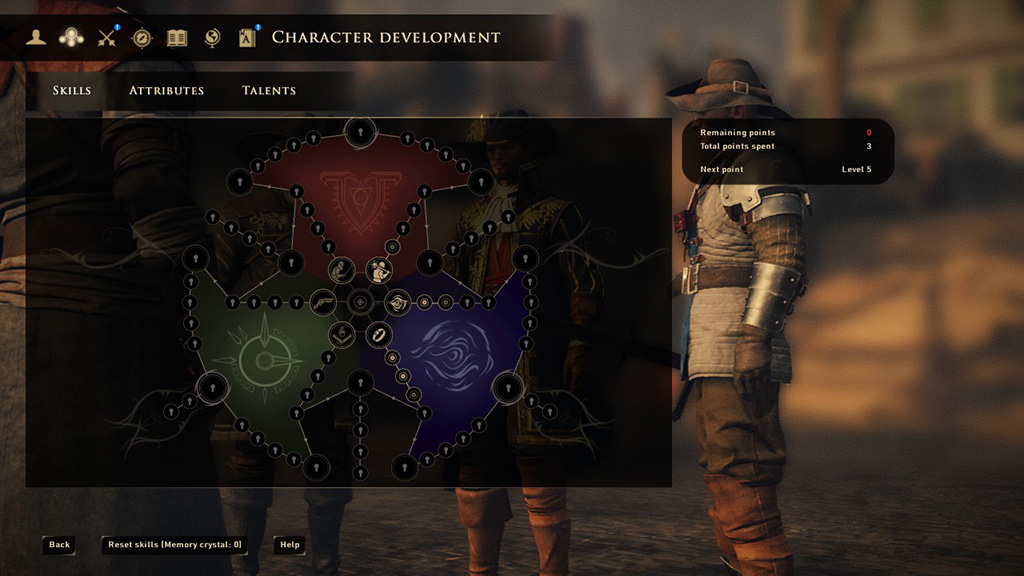 Here you can see the combat skills. The innermost ring is your starting position for any of the skillsets. As you grow in ability you will unlock more points to spend here, but you can also find bonus points via altars in the world. You aren’t locked into any singular area, which means that you can mix and match to some extent. If you want to wield a 2h sword with magic, you can do that. 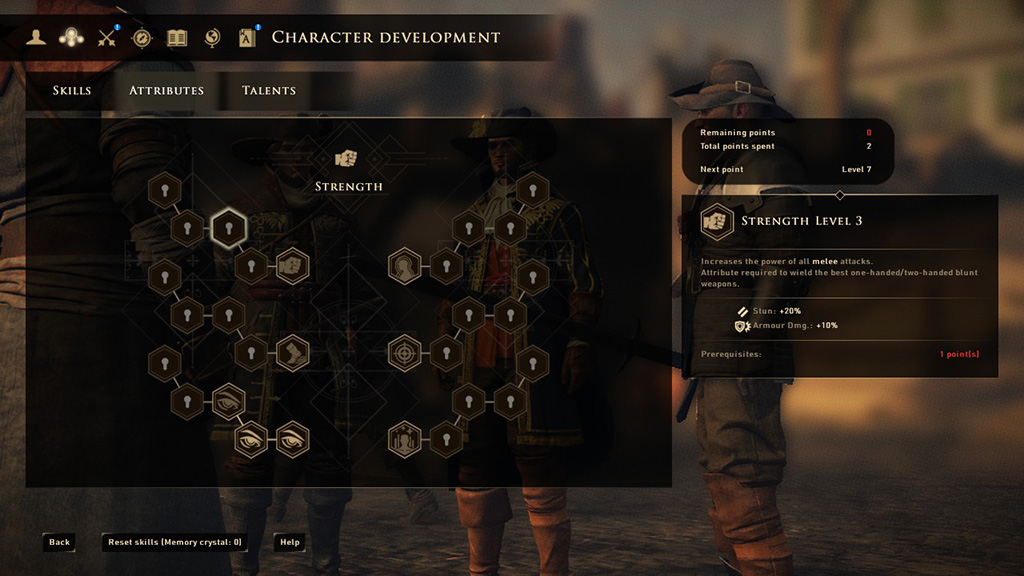 Next are the attributes. You gain one attribute every 3 levels. These not only affect the power of your abilities, but also the equipment you can utilize. Keeping your equipment and combat strategies in mind when applying attributes is wise indeed! 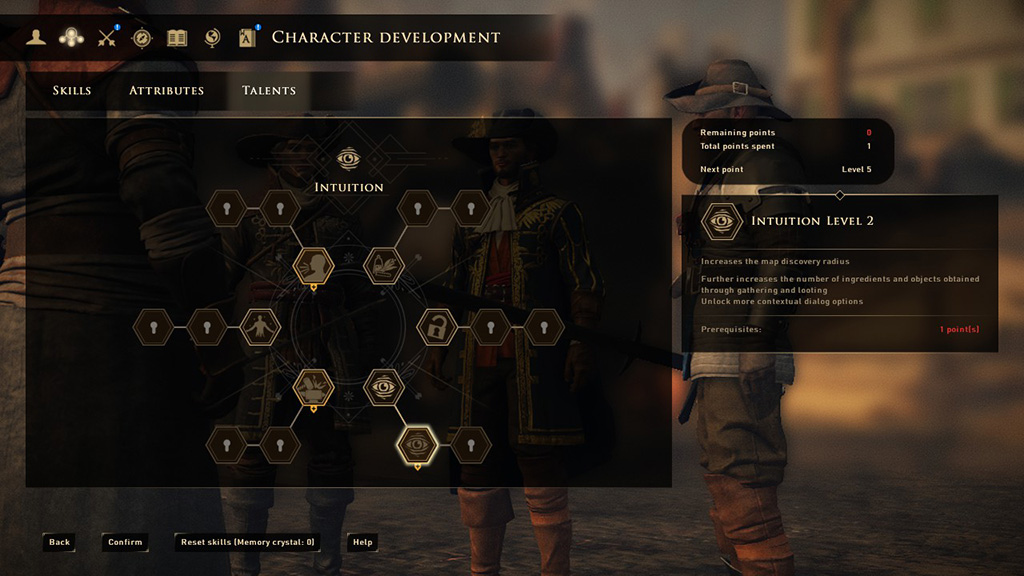 As a final part of the character-building systems, we have talents. These are gained every 4 levels. They are your defining ability set for interacting with characters and the world. You have things like lockpicking and crafting here. You also have talents that apply directly to conversation options and access to areas in the world.

Inventory and a nice little trick: 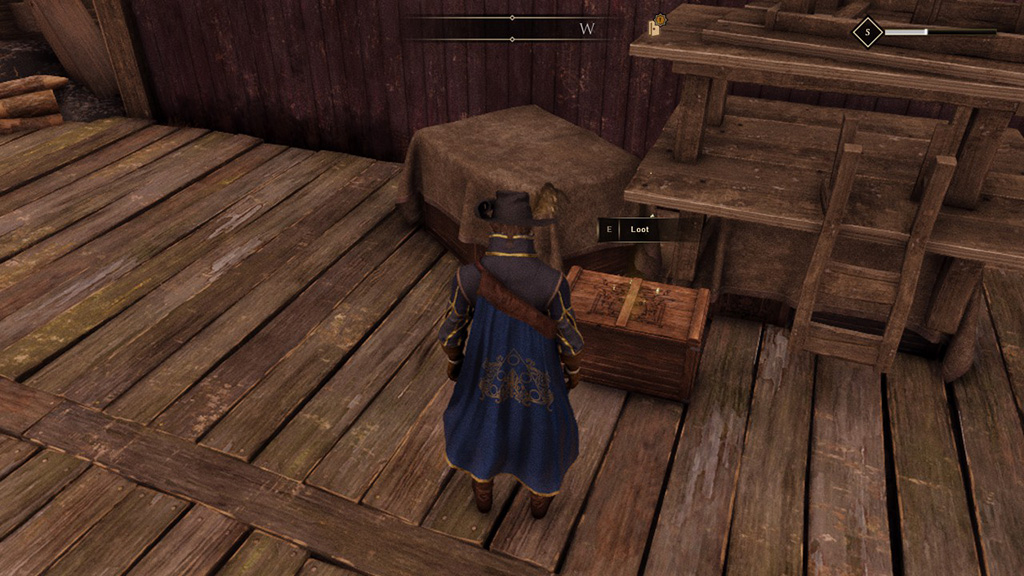 You will be able to find a wide assortment of loot around Serene and the island of Teer Fradee. It seems that nobody really cares that you go tossing their assorted clothes, weapons, money, and other assorted goods into your pack, so loot away! You’ll be able to find a use for everything even if you just sell it for a little more cash. 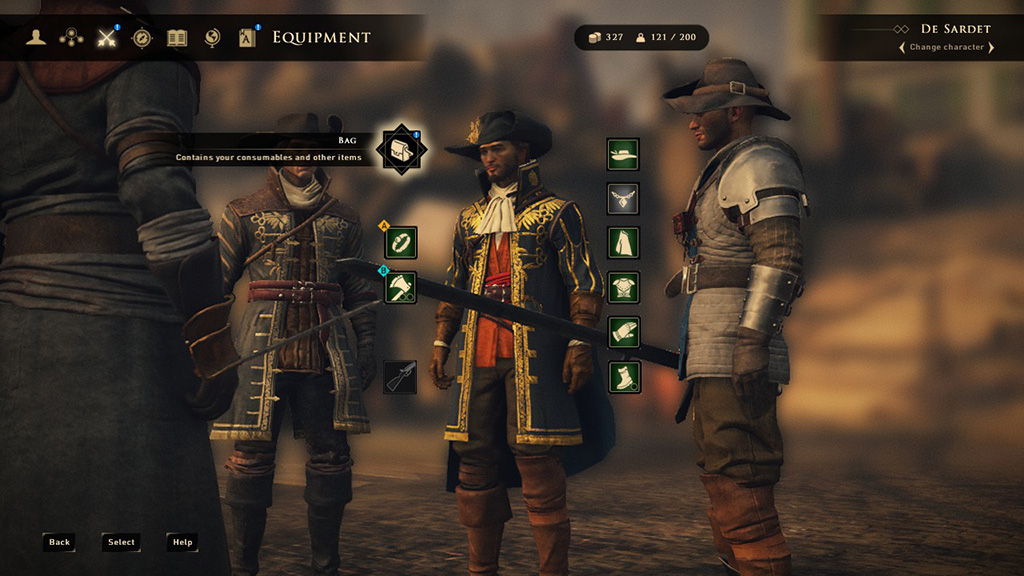 When you loot something you can equip, you can check how it compares via your inventory screen. Selecting any slot will show you your options for equipment in that slot. The bag is the exception, showing you usable items such as potions and flasks. As seen by the bag, a blue exclamation mark indicates new loot for that slot. Sometimes this is a duplicate of something you have picked up before, but it is still helpful. Additionally, since you can view the other characters in the group, you can adjust their inventory. This can be useful if you find new items for them, or if you need to prepare them with different gear for a quest. 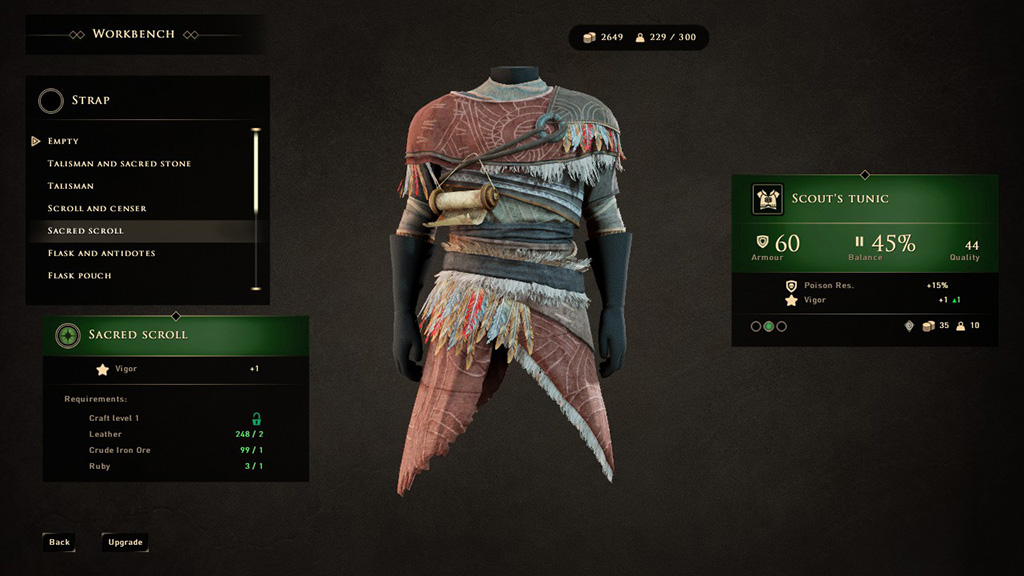 Now, I promised you a trick, and so you shall have one! Certain gloves often come with a bonus to crafting. Equipping those gloves allows you to perform basic upgrades at a workbench. This comes in very handy as a prelude to doing much questing. The reason is that you can boost three of your talents through modifications to clothes or armor in the ‘strap’ slot for equipment with modification slots. Those are shown as little circles on equipment, and are either empty or green to indicate a modification boosting their effectiveness. The talisman or scroll upgrades boost vigor. The flask type boosts science. The lock pouch type boosts lockpicking. You can fairly easily get enough wealth and materials looting around Serene to build a set of all three, making you ready for future adventures.

Companions in GreedFall are very useful. They will fight effectively when combat is initiated. You can bring two companions at any time with you from the get go. They also improve as you grow stronger, and as you assign points to the charisma talent. 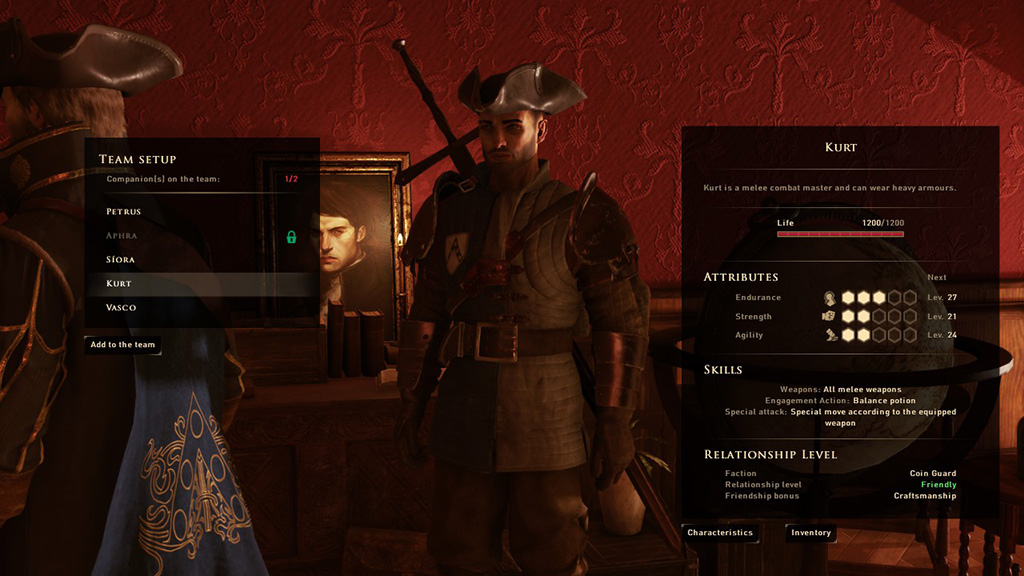 At any point where you exchange companions, which will be available at any camp or your residence in any city once you have more than 2 companions, you can see some important information about them. You can tell when their abilities will increase and a little about what their combat strategies will be. This screen also reminds you which faction they belong to, and tells you the talent they will boost once you have become friends with them (while they are grouped with you).

This means you can reduce your talent usage in areas where you have friends and equipment bonuses, such as crafting. So a single point in crafting covers up to rank three simply by having gloves with the bonus and Kurt at friend level in group. Balancing these points might not sometimes be something you wish to do, especially if you enjoy certain companions out in the world. It is a good thing to have the information at least, so that you can plan as you want with it.

Tips and information to assist you: 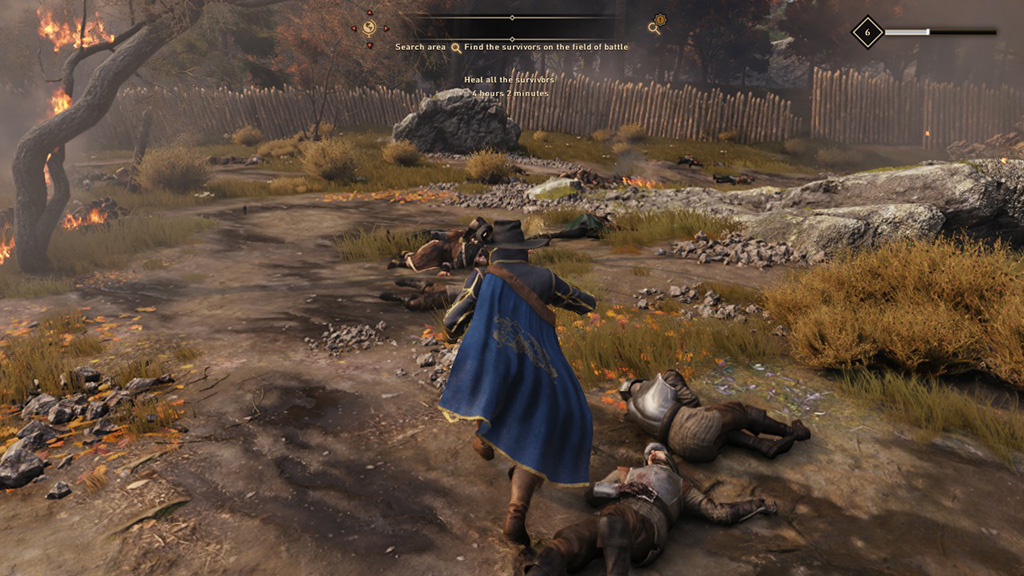 There are some timed quests in GreedFall. They are relatively rare, and in some cases the timer is hidden. Other times it is openly displayed like in the image here.

The game does not tell you that certain keybinds are used in some ways. For example, you must look up the keybind to swap weapons (default ‘V’ on PC). Similarly, ‘X’ is not mentioned, but takes you out of combat stance. Perhaps the most important missing information is that ‘R’, which is the default for action-2, will take everything in a loot screen. This will save you a ton of time.

Finally, there’s a mission to kill 4 foxes, and a mission to defeat some bandits at a certain camp early on in the island story. This is a spoiler for the locations. Since there is no guide for these side missions, knowing where to find them can save you a lot of time.

-If you are leaving without the mission spoilers, thank you for reading this far!

--If you do not wish to read the spoilers, please avoid doing so!

The foxes may be found as follows: One is by the exit of the hidden tunnel in the rocks going from the NE part of the camp to the NE area outside the camp. One is at the far NW wall end where there’s a little square cut back in on the map. The third is found looking right before you start descending if you follow the path out of camp to the south. The final fox is just below the ridge there to the left.

The bandits are found just west of the ruins campsite. If you have not found that campsite, return to the scene of a large battle here. As a bonus, there are several new bodies that can be checked for loot to the east of that battle, left without being looted by the bandits for some reason.

I hope you have a wonderful, profitable, and fun time exploring Serene and Teer Fradee. With hopes that the information I have offered is useful, I wish you safe travels. May you find your pockets overflowing, and a cure to the Malichor!

GreedFall is the latest RPG from Spiders, currently in development for PlayStation 4, Xbox One and PC. GreedFall aims for a very unique visual identity, inspired by Baroque art from 17th Century Europe, depicting grandiose sceneries in muted warm colors and dark undertones.

Explore a fresh new world as you set foot - alongside many other settlers and mercenaries - on a remote island seeping with magic, rumored to be filled with riches and lost secrets. A grand journey filled with mystery follows, as you find yourself in the middle of ever-increasing tensions between the invading settlers and the locals, protected by supernatural beings, manifestations of the island’s earthly magic.

With a strong focus on its core RPG identity,GreedFall follows Spiders’ experience in building intricate worlds filled with mysteries to discover,weaving deep character interactions, and offering players great freedom to achieve quests and objectives in a multitude of different ways – through combat of course, but also through diplomacy, deception or stealth.