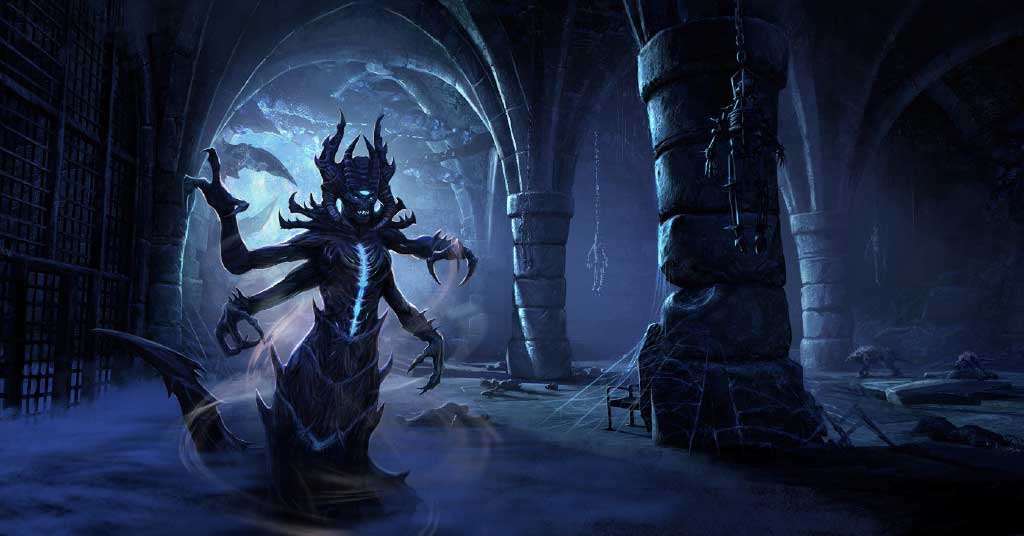 Sitting in the Memorial District, the prison is full of Daedra.  Within, you may find a familiar face, Lyranth.  Also, if you are running in Veteran Mode, you will obtain some Daedric Shackles.  Be forewarned, however, Veteran Mode runs are currently tuned far tougher than previous runs.

The Overfiend is waiting for you shortly after heading into the hallways of the prison.  He is the easiest of the bosses and a solid group should be able to best him on Veteran Mode, even if they are not ready for the rest of the dungeon at that difficulty.

While not a boss, these are a DPS check regularly throughout the dungeon.  On normal mode they are very easy, with a long timer if one exists.  We tested a one-and-a-half-minute wait, so if a timer exists it must be very long!  On VR mode, they are tough, and the timer requires a solid dps team, preferably with help from the healer.  Once enraged, they can one shot anyone.

Ibomez is waiting with a multitude of prisoners around him and locked in cages around the room.  He likes to do some pretty disturbing things to them and he will try to chop you up as well.

This watcher is waiting for you in the middle of a poisonous pool, and eyeing you as he stays safe on the small island in the center.

This monstrosity is another flesh amalgamation.  Yuck.  Remove this tragedy from our plane!

A sort of mini-boss event with several groups of foes with spike traps around the area.  Each group has a lever or two levers to open the gate.  Where there are two levers, you must time pulling them by having one person as lead puller and the other watch the lead and interact as soon as the animation starts.  The goal is to have both levers in motions at near the same time to open the gates ahead of you.  The last place will have four Warden trainees.

The final boss is a Twilight Gargoyle.  You can get your first look at him before you reach Flesh Abomination, perching on the wooden wall.  This boss is a dancefest, but should be fairly easy to handle with a little caution.