Guild Wars 2 Brings the Heat with Path of Fire 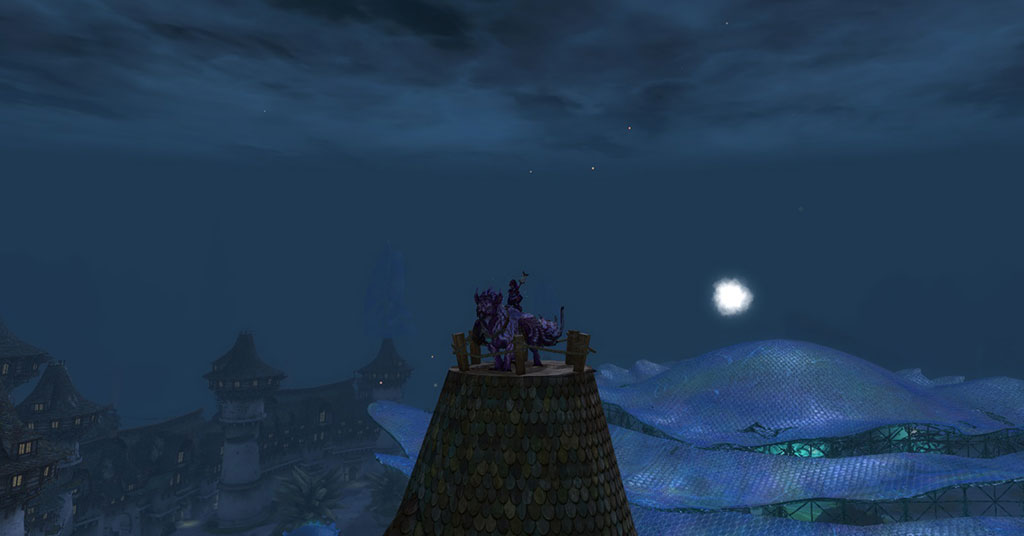 It has been a great ride through all the Path of Fire content though I still have plenty of things to do there. But I have found interest to work on things that had already existed in the game for some time. Due to not playing for at least a couple of years and the last year before PoF being hit or miss, I have found plenty of holes to fill in. This only adds to my desire to keep playing, not to mention the awesome krewe of Gaiscioch. I might not have bothered coming back if they weren’t still here and going strong.

Since my first impressions article and my fan fiction starting the tale of Tinte Rois’s adventures through the story content, I’ve obtained my griffon, completed most of the older story content, got into dungeons and fractals, and added legendary weapon crafting on top of the still leveling and working on ascended crafting. Let’s not mention all those achievements I’ve managed to get with the help of my friends because I keep finding plenty more to do!

I found all the other mounts quite easy to obtain and level up their masteries, thanks to doing each map in order as I did the story. I would not move on until I acquired everything I could in clearing a map and had all the story segments there completed. This took some time, especially since I was note taking and screenshotting the best I could for the story write up.

With the story completed and all four mounts acquired and mostly trained through at least the third mastery, I started the great griffon hunt. This felt appropriately daunting. I had to trek over all the maps reaching all the griffon nests, completing two hearts in each map so I could buy something at each for 25 gold a piece for 250 gold overall, and then there were instance fights and acquisitions to do. I found the library with it’s chests to open with keys you had to acquire from some seriously tough mobs a worthwhile obstacle to overcome.

In the end, I’m glad I made the effort. Thanks to several of the Gaiscioch family who helped me get to those places I just could not land on them. Thanks to flying so much I might even nail that pillar for a griffon nest I failed on several times if I tried it now. My advice is to take your time, seek help where you can get it, and enjoy the journey. There is no rush except the expectation of flying in the game beyond what gliding gave us.

Of course, I don’t know any of us that haven’t run around the older maps with our mounts to see where we could get that we never did before. I’m glad Arenanet left some things open to mounts, but I’m glad some places they aren’t allowed to keep the proper challenge, like jumping puzzles. Though a few have easier ways in with mounts, but all the ones I can think of could have a mesmer portal you in that way, too. We all have probably taken advantage of a mesmer to complete a jumping puzzle before.

What I truly enjoyed was the views, falling long distances without dying though my mount takes the beating, and getting stuck in strange places. I don’t find that mounts made the older maps easier per se, but you can get around them far faster. Some of the vistas are easier while sometimes a mount just makes them clunkier to nail the landing on a small perch if you are not proficient enough.

I have started a map clearing event, due to a number of new people to the game and I found this is where mounts are a hindrance. It is unfair to lead them across the map at a speed they have no chance of obtaining yet. Some of these people are not popping their level 80 auto boost just because they want to learn the game first. You can’t work on gliding or mount masteries until you reach 80 and have the expansions. I’m glad these new players are learning the game, enjoying it, and most are buying into it including the expansions as money allows. This is one of the few games where I find that expansions and new additions, like mounts with PoF, is keeping fresh blood coming to the game, making people like me return, and there are plenty of players who have been here the full duration, thanks to how the game expands over time.

I found that the mounts were properly introduced to the game and that they work well everywhere with the right exclusions. 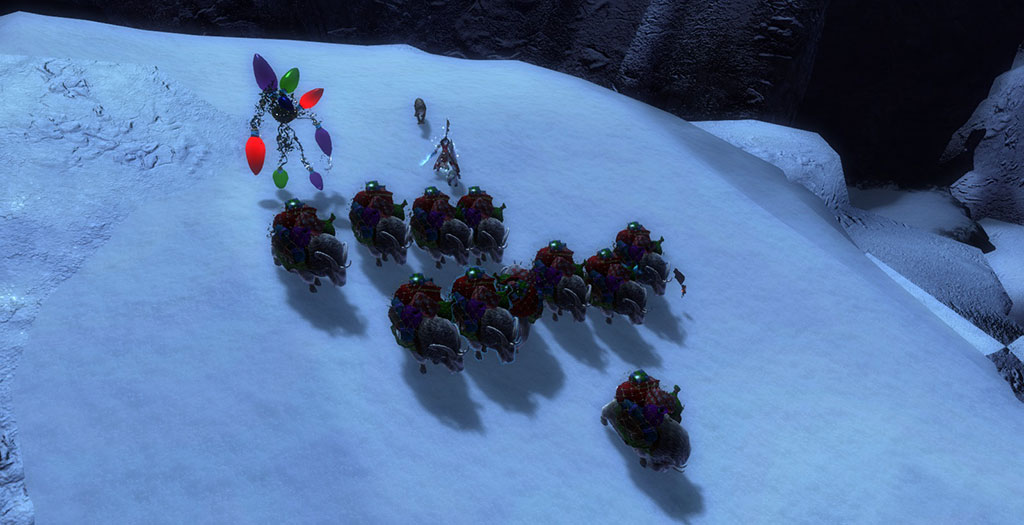 This is always a popular event and it was a nice filler for the end of the year for something different to do. We had our annual Secret Santa, Smitty streamed his event including the telling of how the ‘Grinch Stole Christmas’, and we definitely demolished Toypocolypse many times over. Racing on mounts instead of only on foot added a new thing this year and I love that rentable mounts could be acquired for those without Path of Fire (PoF). But one of the craziest things we did was run across an alpine WvW map as holiday Dolyaks making our enemies wonder all the more about us.

Just like Living Story Season 3 (LS3) not only is there a vibrant story that continues nicely from where the main Path of Fire story ends, but another fun area, the Domain of Istan, opened up for exploration. A new type of currency called Volatile Magic was added. Collecting and earning it works much like the Unbound Magic found in LS3 and you can spend it at the various heart vendors. Like the prior season and PoF maps, you can earn the heart each day and then shop the wares available.

Two large events have attracted the players to this zone for a great deal of loot and fun. One occurs in the Mordent Crescent Great Hall and the extensive one starts as the sun sets in Palawadan, Jewel of Istan.

Let’s not forget all the extra achievements that one can acquire with this new zone so that it is definitely on par with all the prior living story zones. So far the first chapter of LS4 has not disappointed, even if I managed a lot of the core elements in the first week it came out. I took plenty of notes and screenshots to go with a fan fiction piece I’ll write up.

Gaiscioch led yet another one of these great adventures doing a nice combo of Central Tyrian events and a WvW excursion for the first half and exploring the five maps of PoF for the second half for ten events total. Many prizes were given (thanks to all who contributed to the cause), tons of great fun achieved and, of course, a few awesome deaths to make it a true Gaiscioch event. In the end we set up in a scholarly place to hand out the biggest prizes of all.

Gaiscioch rolls like this wherever we go, but GW2 has been one of the best places to do such events.

A Continuation of the Old

Upon returning to the game I had to regroup and then plunged primarily into PoF until I had the story, maps and griffon mount accomplished. However, due to over two years away and more random play up until a month before PoF, I have all sorts of holes to fill in my achievements and back stories. I have worked on these solo and with friends, whether to complete it the first time or to do it again for missing achievements.

Another place I found I liked much better this time around were the dungeons and fractals. For some reason when first doing these, I was not impressed. I can’t say for sure why, but there are plenty of the guild who do these regularly and sucked me in. Now I’m working on setting up one of my characters specifically for fractals and have a good start on working my way to higher tiers. For achievements, I am close to having done all the dungeon paths, several more than once at this point.

I’m still working on leveling all my crafters to 500 and putting ascended gear on my two primary characters, but I’ve delved into the insanity of legendary weapon crafting. It’s proven to be a bit addicting as I run around completing collections, acquiring materials, and crafting parts. I bought all of the legendaries even if my primary ones were Rodgort and Meteorlogicus for starting. This allows me to randomly pick up collections for the others by playing the game. It proved to be a smart thing to do within hours of making sure I had them all. I may have an article in the next issue about my fun with this endeavor. I also want to thank some friends for helping me get started and get into Rodgort III within a week.

But let me leave you here with a funny shot of my asura, Tinte Rois, stuck in swimming goggles until I logged and came back to the game. Yeah, I found a bug that I reported (at least I think I did) while trying to complete my Dive Master achievement. 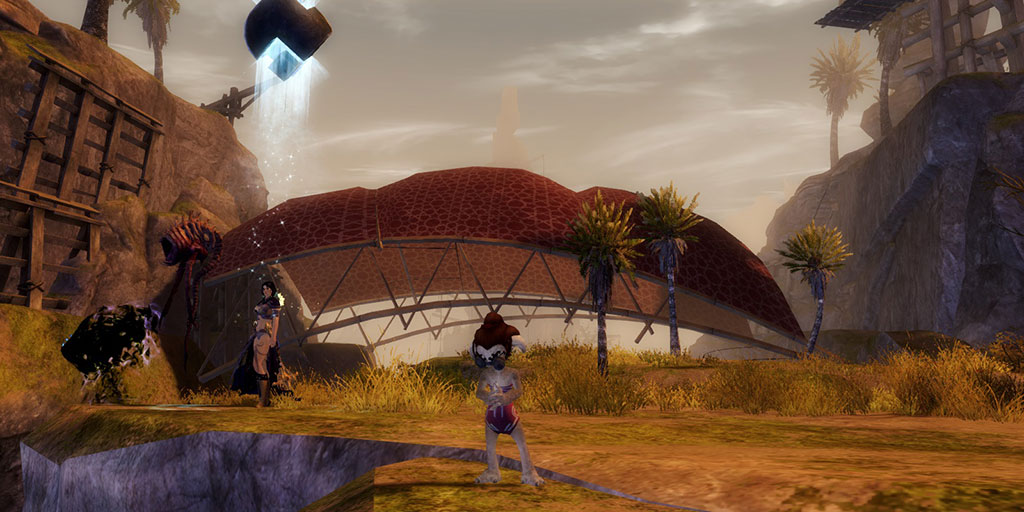 The additions to Guild Wars 2 have not disappointed. WIth the holidays, I saw a lot of new people come into the game. I talked to quite a few of them, guildies and non, having fun helping them answer questions and figure things out. I’m looking forward to what comes next with LS4 and the next holiday event.