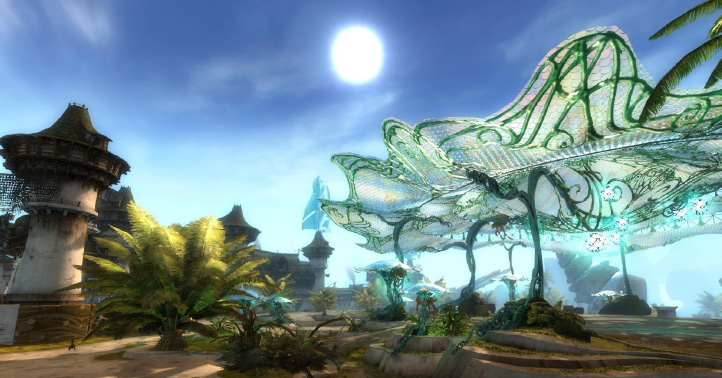 Laurels are a very special currency in Guild Wars 2 that can help you get some of the most unique and valuable items in the game, including Ascended gear for your characters.

Laurels are a “just for you” currency.  They are account-bound and nearly everything you can buy with Laurels can’t be traded.  They are stored in your account wallet.

You spend Laurels at specific vendors.  There are Laurel Merchants in the major cities, in Heart of the Mists, and in the Citadel of your home WvW borderlands.  You can also buy recipes for crafting Ascended gear using Laurels from crafting trainers.

In addition to Ascended gear recipes and trinkets, you can use Laurels to purchase crafting materials and unique rewards from Living World Season 1.  These include armor and backpack skins, harvesting nodes for your home instance, mini pets and more.

You can even buy WvW ranks from the WvW Laurel Merchant.

The easiest way to acquire Laurels is to earn the daily login rewards. Login rewards repeat on a 28-login cycle, and Laurels are awarded several times during the cycle.  Over the first 23 logins you’ll get a total of 35 Laurels.  If you also choose the 20 Laurel option from your 28th login reward, Chest of Loyalty, you can bump that up to 55 Laurels per month.

Although you can speed up the arrival of that next Achievement Chest by completing other achievements, your fastest, easiest Laurels will come from simply logging in and doing a few quick dailies.

Even more Laurels, and something good you CAN trade

While practically everything you can buy with Laurels is account-bound, there’s an exception: crafting materials.  A particularly valuable option is the Heavy Crafting Bag, which costs just one Laurel and contains Tier 6 fine crafting materials—the bones, claws, scales, blood, etc. that you use to craft Legendary weapons, Ascended gear, and Exotic gear.  The average value of these items is currently around 33s and every bag contains three of them—making each bag worth about 1 gold.  Not bad!  Now multiply that by 55 Laurels a month....

One way to take advantage of this windfall is to make an alternate account or two.  I bought a couple extra copies of the game when it was on sale for US$10, and made a lowbie character on each.  It just takes a minute to log them in every day to gather up my 55 monthly Laurels per account.

Every few weeks I visit the Laurel vendor on my alt accounts to buy as many Heavy Crafting Bags as I can.  The bags themselves are account-bound, but the materials inside are not.  So I open them, then mail the stacks of T6 crafting materials to my main account.  I’m making real progress toward my Legendary weapon now, and saving the Laurels on my main account for other purchases. 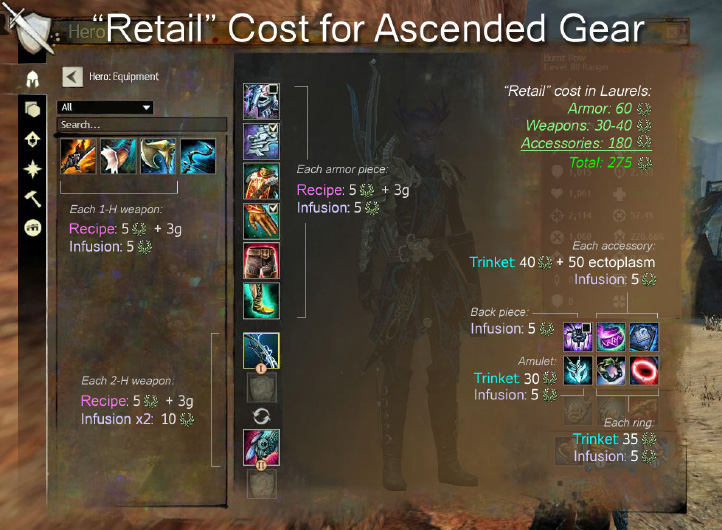 55 Laurels per month sounds like a lot until you try to put one of your level 80 characters into full Ascended gear.  There are some tricks to getting your Ascended gear for fewer laurels, which I’ll cover later.  But first let me show you an example of “going retail” by buying the recipes, infusions and trinkets directly from the Laurel Merchants.

275 Laurels!  That’s a long slog to reach Ascended everything, especially since you still need to scrape up the bolts of damask, vision crystals, globs of ectoplasm and dark matter, and everything else that goes into crafting Ascended gear.

So what are your alternatives to spending Laurels at retail prices?

Ascended armor and weapons are only a little better than Exotic gear, so you may find yourself deciding it’s not worth the bother.  The exception is anyone who runs high level fractals: you’ll need the infusion slots that are available only in Ascended gear to stack Agony resistance.

You may be lucky enough to get a piece of Ascended gear as a drop. It can drop in PVE, WvW and PVP, but drops even more frequently in high level fractals.  If you are really, really lucky the item will have stats you can use, too!

The June 2015 patch gave us a way to morph the stats on Ascended armor and weapons in the Mystic Forge.  This is fantastic news for anyone with a Box of Ascended Gear With Wonky Stats gathering dust in the bank.  (Trinket and back pieces can’t be reforged yet, unfortunately.)

Since it’s a Mystic Forge recipe, only four items are needed:

Important!  Any runes, sigils, and infusions that are still in the Ascended item when you toss it into the forge will be lost!  If you want to save them use an extractor prior to reforging.

Now that we can change the stats of Ascended armor and weapons in the Mystic Forge we have yet another way to save Laurels: by not buying recipes!

Instead of buying new recipes for each Ascended armor or weapon type + stat combination you want to craft, craft them with ‘throwaway’ stats.  Use recipes where the Exotic inscription/insignia component is cheap to craft—for example: Verata’s.  Craft the Ascended Verata’s item then take it to the Mystic Forge to reforge to the desired stats, as described above.

This approach saves the 5 Laurels + 3g for each new Ascended recipe you’d otherwise have to buy.  It also saves the 21,000 karma needed to unlock the matching Ascended inscription or insignia recipe.

Verata (Silverwastes) and Ventari (Dry Top) recipes are most often used for this, since they can be acquired without spending Laurels!  Just look for them as drops in their respective zones, or buy the recipes from the Trading Post—often for less than the 3 gold which is part of the Laurel Merchant’s price.  You’ll still have to gather some zone currency and a little gold to buy the matching Ascended inscription and insignia recipes.  You’ll also need the recipes for the Exotic inscription and insignia, since they are needed to craft the Ascended versions.  Thereafter, you can use these insignias / inscriptions to craft all your Ascended gear.

If you already have recipes for a stat combo with cheap-to-craft Exotic insignias / inscriptions (like Coalforge’s Carrion), you can use those instead. 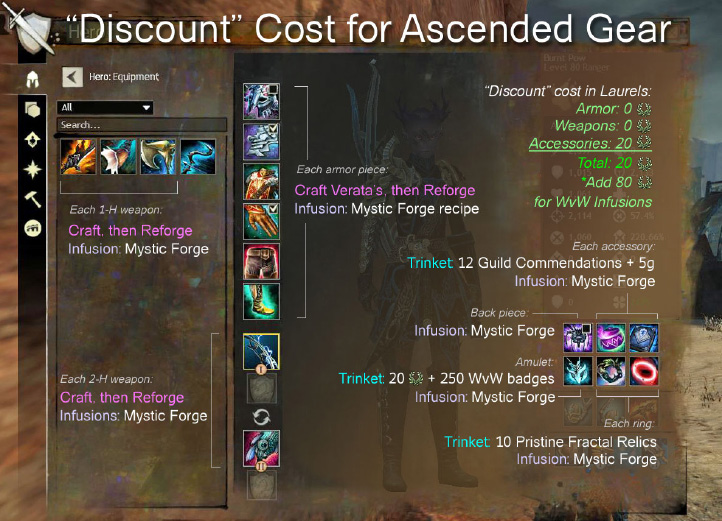 As mentioned above, Ascended trinkets do drop from mobs.  In particular, rings are a fairly common reward from boss chests in high level fractals. However, as also mentioned, they can’t be reforged if the stats aren’t what you want.  So unless you are lucky, you may find yourself spending some of your precious Laurels for trinkets with the stats you need.

There are three wrinkles when it comes to acquiring Ascended trinkets:

So let’s go slot-by-slot to discuss the options.

You can save 10 Laurels by buying your amulet from the WvW Laurel Merchant instead of the Laurel Merchant in your favorite city.  You’ll also need to give him 250 Badges of Honor, which you can farm very quickly in Edge of the Mists.

If you run fractals regularly, you can purchase the ring of your choice for just 10 Pristine Fractal Relics.  If not, you can save 10 Laurels by buying from the WvW Laurel Merchant.

Ascended gear comes with a slot for a special upgrade component called an Infusion.  If you don’t need the WvW bonuses, you could avoid spending Laurels by buying or crafting the agony resistance versions.

The crafted recipes use a lot of pricey crafting mats, however.  Remember the one Laurel = one gold calculation earlier?  If you don’t need Agony Resistance (and have spare Laurels), the Laurel versions can be a very good value.

Omni version, which can be slotted in offensive, defensive and utility infusion slots:

Core stats with no bonuses

Adding up the Savings

Here’s the “discount cost” picture for full Ascended gear: just 20 Laurels for the amulet.  If you want WvW bonuses in every infusion slot, you’ll need to spend another 80 Laurels. That’s still quite a savings compared to the 275 Laurels we spent for the “retail” version!

Now That I Have All These Laurels Left Over…

You’ve saved a bunch of Laurels, so what should you do with them?

First, be aware that there are some terrible “deals” on the Laurel Merchants.  (I’m looking at you, siege blueprints!)   Earlier we talked about Heavy Crafting Bags, which cost one Laurel and give items worth about one gold.  Or, about 85s—after fees—if you sell the mats on the Trading Post.  ‘85s per Laurel’ is the rule of thumb I use for evaluating the offerings.

For example, two Laurels (worth 1g 70s) buys you 4 arrow cart blueprints.  I can buy these for 6s each from the vendor, and even cheaper on the Trading Post.  It’s not a deal I’d take.

On the other hand two Laurels + 50 Badges of Honor buys you an entire WvW rank.   That’s a much better deal.

Or you could go for some of the cool Living Story Season 1 armor skins, like a gas mask or the white flower backpack skin pictured here.

I’ve been using Laurels to buy the gathering nodes for my home instance, and I find them all quite useful.  I use the Krait Obelisk, for example, to charge quartz crystals for making Verata armor.  It also counts as a hero challenge, so it’s a bonus Hero Point for all my characters, too.

You decide!  There’s plenty to choose from now that you have a few Laurels to spare. 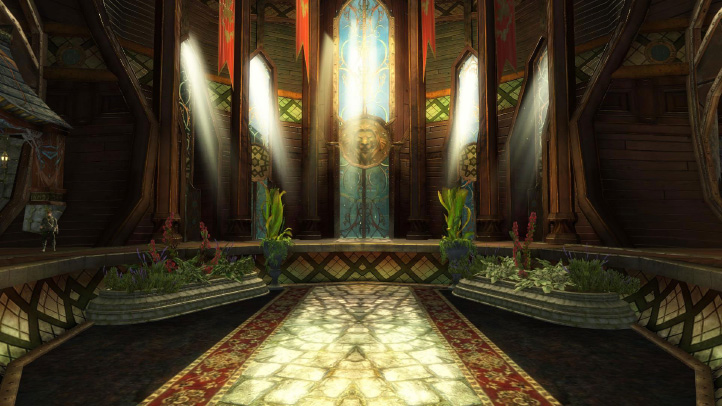