It is almost too easy to assume, that given the opportunity, ArenaNet would leave the ongoing battle for Tyria to drag on for another season. With the Mists opening yet another war front, it was easy to see where we were headed in Season 5 of Living World, or so I thought. Today, Guild Wars 2 drops the finale of Living World Season 4 and Gaiscioch got hands-on with War Eternal.

Let’s be clear, things are not looking good for Tyria right now. Kralkatorrik is still very much alive. The brand is a blight on Tyria and, even after everything we’ve gone through, Aurene is dead. While War Eternal is the culmination of all our efforts over season 4 of Living World, things do not look like they are about to have a happy ending. As if to reinforce this foreboding, War Eternal picks up shortly after the events of All or Nothing and deposits players into a brief preamble that eventually leads us back to Aurene.

As War Eternal loads into a chamber bathed in the purple hue of branded crystal, our characters struggle for words and a foreboding hangs in the air. A debuff even enforces this atmosphere, limiting player characters to a determined trudge, as if the reminder of Aurene’s death is simply not serious enough. At first, this feels a little heavy-handed until you take the time to talk to the remaining members of Dragon’s Watch. This scene of loss is a reminder of Eir Stegalkin’s funeral at the start of season 3 of Living World, without the mandatory fetch and carry tasks. It focuses on the characters directly impacted by the end of All or Nothing and their immediate grief. This area even touches on the wider implications for the rest of Tyria as some in attendance sing for Aurene, just as they prepare for the end of all things. It’s a cutting moment that stands out among the rest of the action in War Eternal for its simplicity and the haunting nature of this audio accompaniment.

While we won’t get into a blow by blow account, suffice to say the rest of War Eternal is an epic affair that begins to bring the narrative towards a conclusion which many of you may already have expected. Aurene does indeed come back to us and while I’m not going to get too far into this for spoiler reasons, it feels a little cheap. Lore fanatics are going to have some questions and while I’m sure ArenaNet has the answers ready, it still undermines all the work done to dispatch Glint’s sire.

With this done, the entire episode moves beyond the final battle of All or Nothing and off into the mists, and pays off on the teaser’s we've all been busy watching.  As Aurene chases down our elder foe, War Eternal embarks on a dogfight that puts the earliest encounters against Zhaitan to shame. While it is clear that this is a new type of encounter, chasing down Kralkatirrk always feels engaging. The Commander never has to simply hit 2 to win and as you pick away at the elder dragon the scale of the entire encounter is awe inspiring. Again, I will not spoil the whole encounter with a step by step guide on how to take out an elder dragon, but instead, point out how blown away I was by the work on Kralkatorrik. While I was slightly underwhelmed by the appearance of this elder dragon in All or nothing, the scale and detail involved as you get up close and personal with this purple menace is something to behold.

As the adventure, and Kralkatorrik, come crashing back into Tyria, the final frontier for season 4 lands. War Eternal opens into a massive new map where players find the barriers between worlds beginning to crumble. As we gear up for an epic final encounter with Kralkatorrik, Tyria is barely holding itself together. The final map in season 4 is a collage of an ascended underworld, lava flows, fiery straights, and branded devastation, which all hang around the elder dragon’s battered body. If the scale of this endeavor was ever in doubt, just stand back and watch as Kralkatorrik’s tail twitches and the entire horizon moves and comes crashing back down to the ground. The desperate elder dragon’s wing hangs off an entire side of the island and even seems like it might provide the one ingredient the Pact needs for victory, Kralkatorrik’s blood. This huge region, situated just south of Orr, is relentlessly battered by Kralkatorrik’s brandstorm, and the regions that are drawn into the chaos borrow show design decisions taken from the other maps of Living World Season 4.

Unlike Sandswept Isles or The Desolation that focus on one very obvious theme, Dragonfall is a hectic island that plays host to a diverse range of creatures. Ripped from across the realms, massive Hydras patrol the lower echelons of this island, where lava flows twist through the depths and fire ravages anything that dares try to survive. Angry spirits roam the upper plains of Dragonfall where the underworld intersects with the living, and a massive branded storm hovers ominously over the center of the island. The diverse range of architecture and enemies that inhabit Dragonfall are a definite nod to the adversaries that the Commander has encountered already. The undead populate the underworld, an obvious reference to recent encounters with Palawa Joko, and even Zhaitan. A section of the Maguuma Jungle even makes an appearance, corrupted by the brand, and acts as another reference to Mordremoth. Everything on Dragonfall is a reminder that magic from many of the Commander's former enemies now stands against us in Kralkatorrik. It is a testament to everything that the Commander has faced and a reminder of how far Living World has also advanced. 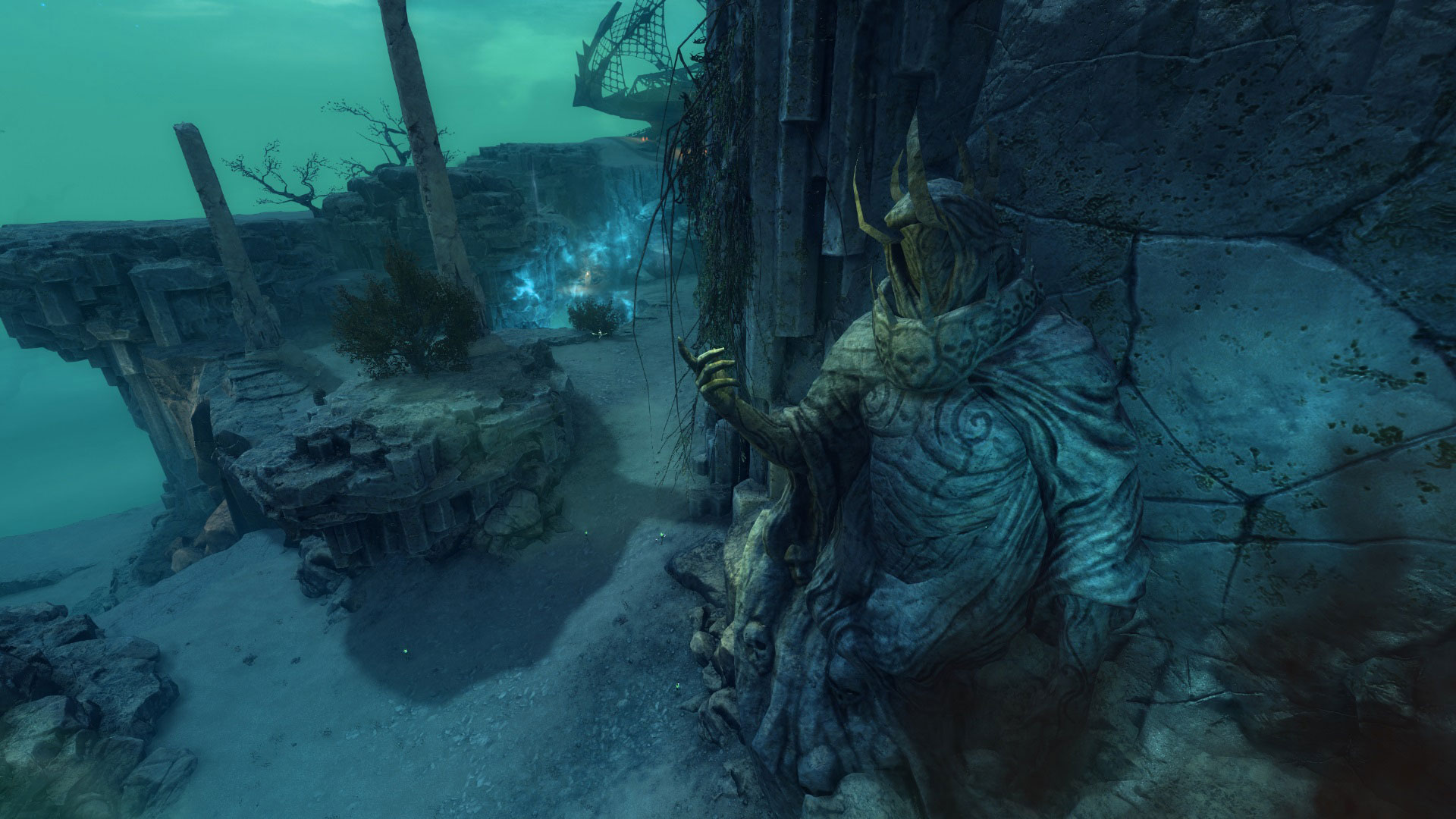 Like any new warfront, Dragonfall plays host to a massive map wide meta. A few secure locations are dotted around the map and several upgrade operations run, as the combined forces of Tyria attempt to push back the brandstorm. Bridges can be raised and soul chains collected in a number of standard fetch and carry operations that are not overly inventive. What impresses, however, is the map meta that seems to borrow from The Silverwastes. Three lanes creep out of the northern Pact base and off into the various biomes of Dragonfall. What follows is a set of escort missions that, if correctly completed, eventually lead towards a massive assault on the enemy that beats at the heart of Dragonsfall.

While my personal take is that this doesn’t quite have the same accessibility of the Silverwastes multi-lane meta, it still makes for an engaging encounter and players wanting an easy ride should probably talk to the Olmakhan NPCs .

While this diversity of existing content is a great thematic nod, it also has some advantages over the game’s newest transportation method, the SkyScale. A mix of Drake DNA and Wyvern, the Skyscale represents the eighth mount to land in Tyria. Just a few months after the introduction of the Warclaw, the SkyScaler is a flying mount that gives some very obvious upgrades on the Griffon. While the Griffon mount is described as more of a fighter jet, moving far and fast, the SkyScale is designed to provide height and sustained progress. Players who are not adequately advanced to unlock this new mount using a quest line similar to the roller beetle, will be able to get a taste by borrowing a Skyscale in Dragonfall. Fully fledged Skyscales and temporary mounts, however, are still subject to a maximum altitude which falls far beneath the vertex of several lava funnels. As impressive as the Skyscale is, it is not over engineered.

Despite its limitation, the Skyscale is clearly designed to make use of vertical space. As it soars and eventually runs out of flight time, players can use the Skyscale to grip onto any vertical space. Any remaining endurance can be used to charge up a leap, similar to the springer mount. Jumping up and off a cliff edge is not only satisfying, it also proves invaluable when grasping for that last few inches of height. I found the Skyscale is extremely forgiving as a companion, although not exactly the cutest mount in the roster,. The option to grasp any vertical space is also going to make for some game-changing movement as the Skyscale unfurls its wings across Tyria.

The Skyscale is not the only new addition to the player inventory with War Eternal. The brand new Greatsword, Exordium, is the last Legendary to join this season of Living World, and it continues to make greatswords some of the most visually stunning weapons that the game has to offer.  Joining Twilight, Sunrise, and Eternity, Exordium is a visual treat. While you might have seen this swirling metal blade, and it’s energy core, you probably haven’t seen everything it can do. Like so many of the current generation of weapons, it has an extra special twist, Exordium reacts to weapon skills. For a variety of classes, the Exordium animation changes depending on the particular sword skill used, making the flashy expansion of this blade or explosive ground pound feel just that little bit more special each time.

You will need all your weapons at the ready when it comes to the finale of this season. With a downed Elder Dragon attempting to draw ley energy and heal, there is no way to finish the job but going for the heart. The last moment’s of War Eternal takes a gloriously bizarre twist pulling players into the gullet of the elder dragon and facing its core. The crystal cage that awaits is something of a mix between Glint’s lair and a corrupted mist. While this encounter is clearly balanced to allow solo players an easy enough experience I found it generally engaging. The last moment’s of Kralkatorrik is not particularly difficult to overcome but they matter for anybody who has questions about elder dragons. You are about to end up with a whole lot more. While this preview dips into spoilers I am not going to give any more away. There is still a little more to the story, but suffice to say we win. It is a decision I didn’t see coming and a wonderfully upbeat moment that leaves questions without having to resort to yet another cliffhanger. With Season 5 of Living World on the cards, we shouldn’t have to wait long before we know where this will leave the world. War Eternal will have consequences, and while the story content sometimes feels a little easy, the writing and design take on an epic grandeur that really does reflect everything that we have been fighting for the last few years.

If you are ready to grab the episode of Guild Wars 2 then you will need to pack up your troubles, put All or Nothing behind you and get into War Eternal. You will need a copy of the Path of Fire expansion to play and this is available over at the official Guild Wars 2 website. The finale of Living World Season 4 is out now and for free. Finish this fight for all our sakes!