Honour, signified by a gold medal, serves as the gateway to unlocking new troops, new troop abilities, and new eras. It is the single most important currency in the game as it opens doors of opportunity to you by giving you more powerful troops at your disposal.

There are several ways to gain Honour including Battles, Fief Quests, and Daily & Weekly Quests. In this guide, I'm going to go over the various ways to earn Honour and give you an idea of how to build it quickly. 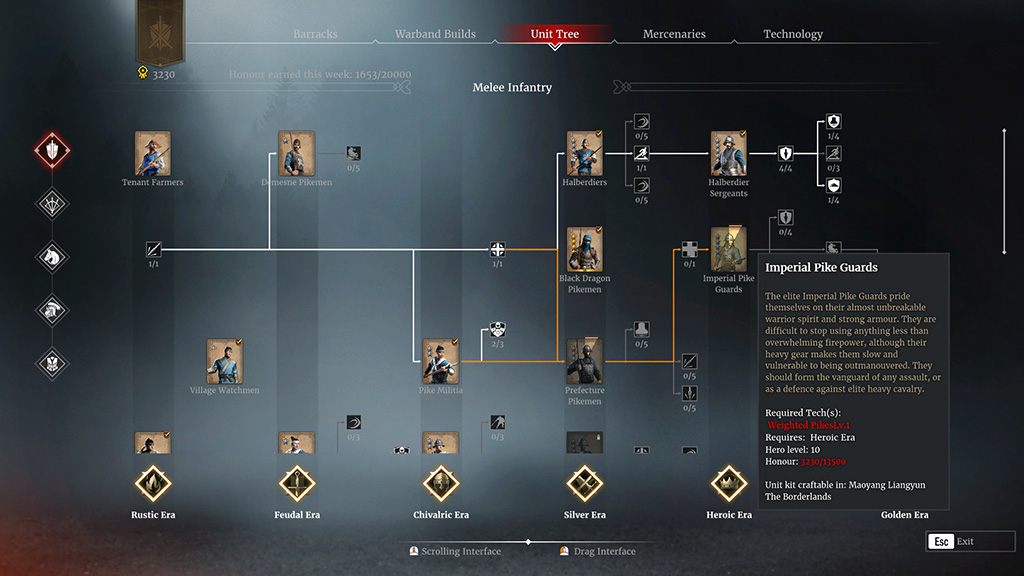 Earning Honour of the Battlefield

At the very core of Conqueror's Blade is combat. Everything revolves around it. Both PvE and PvP game systems rely on your ability to effectively perform in combat. Based on this ability you will gain a varying level of Honour for each battle. You can earn up to 20,000 Honour per week on the battlefield which makes this one of the largest sources of honour in the game. Below we will break down how much honour and other rewards you can expect to earn per minute in each of the main gameplay modes.

For the studies listed below, we gathered over 500 Personal Stats Recap screenshots from dozens of players across the Conqueror's Blade Community. We then grouped the results by Warscore (Grade) and balanced the scores so that no grade was represented more than others. We captured data from C, B, A, and S ranked players evenly to preserve the integrity of the averages.

All data used in this article is listed by the base value without the bonuses from premium, mercenaries, special events or boosters.

Having overall averages is great and all but what can you as a player expect based on your common war score. Not all players can score an S every match, so below we have broken out the scores based on war score for each of the main gameplay modes.

* Note: Working on gathering more data to separate Expedition I, Expedition II, and Expedition III into their own data grids. Stay tuned for updated information.

* Note: Working on gathering more data to separate Easy, Medium, and Hard into their own data grids. Stay tuned for updated information. 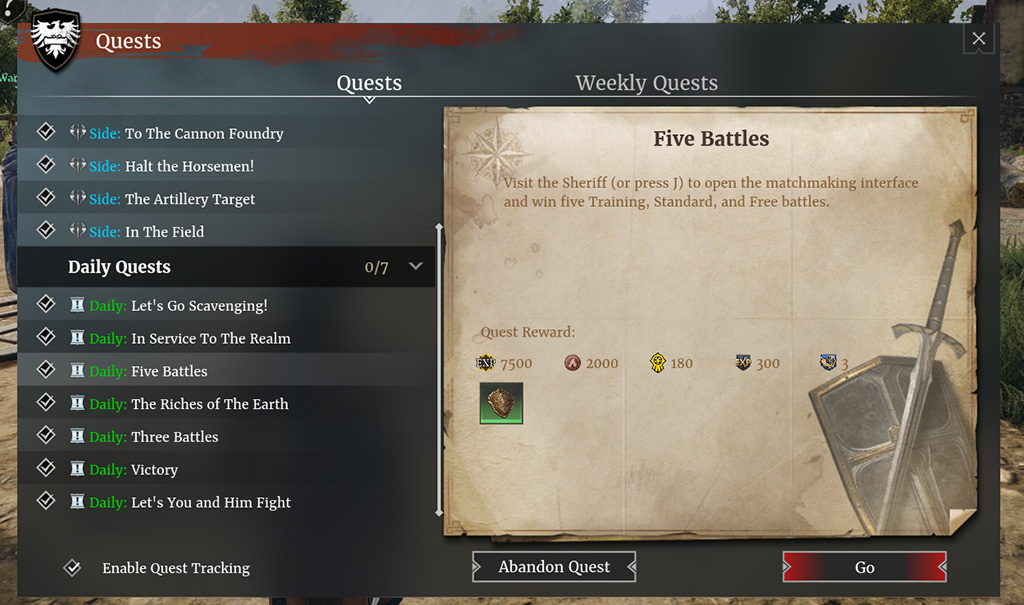 Every day you can talk to the Warden, Sherif, and Billeting Officer to acquire daily quests. The only quests that provide you with Honour as a reward directly are the Victory, Three Battles, and Five Battles quests from the Sheriff. This will give you 600 Honour every day for running through these three quests.

My recommendation would be to do these three in the Training Yard (AI) battles which typically last between 4-5 minutes and almost always end in victory. As noted above AI Battles are the highest per minute gains for exp and unit exp in the game. They also offer moderately high honour per minute as well. While not the most exciting way to play they certainly have their advantages. 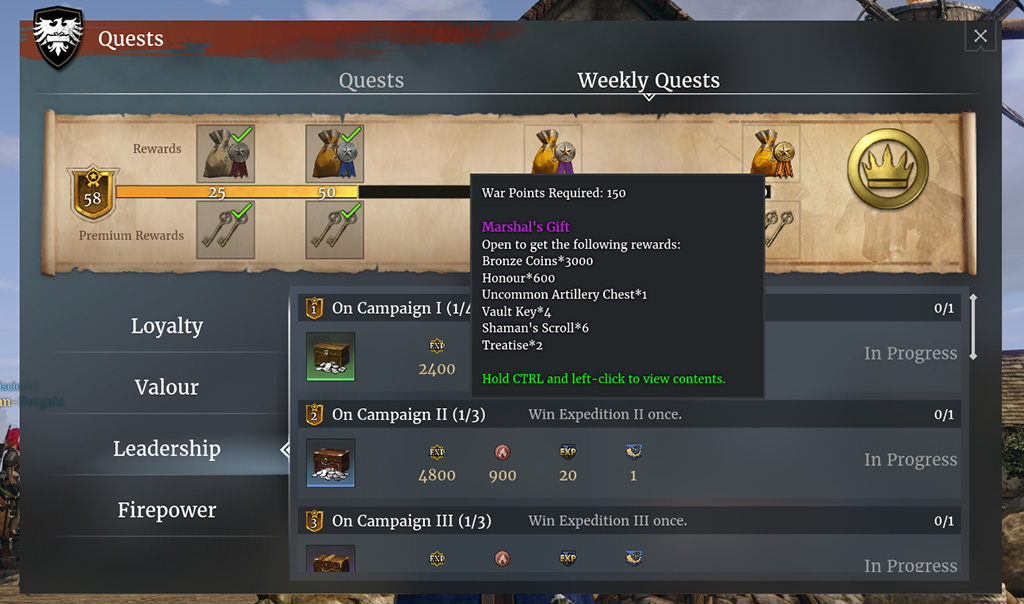 While weekly quests aren't the best for honour, there are several quests that have a random chance to reward Honour inside the rewards chests you earn. This is not a reliable way to earn honour but the other rewards in the form of crafting materials, silver, skill pages, skill points and bronze will make these worthwhile. 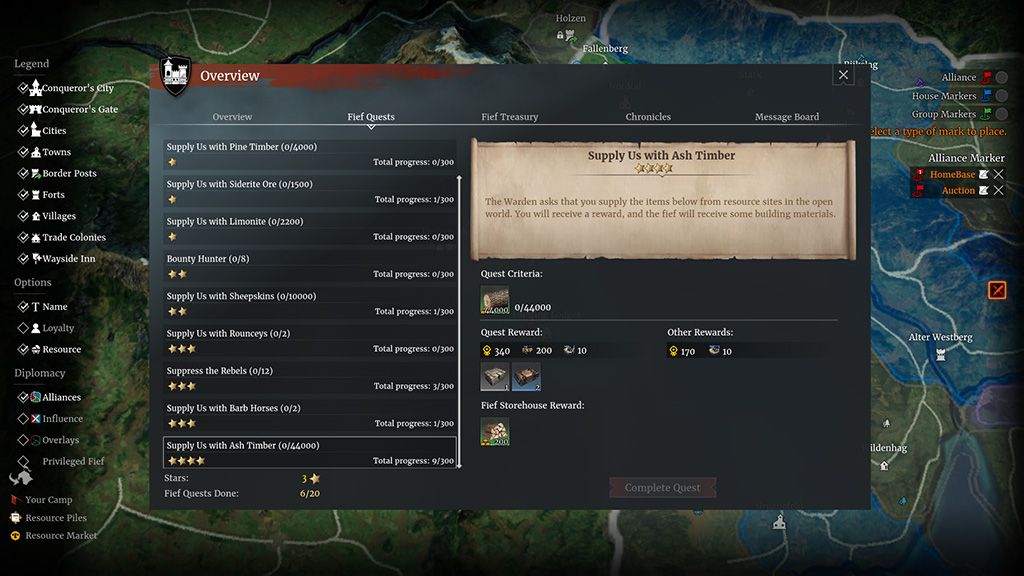 One of the most overlooked features of Conqueror's Blade is it's Fief questing system. Most new players have no idea what it is or how it works. But peel back the confusing surface and you find one of the most effective ways to earn Honour in the game.

Here is a general guide to the honour rewards you can expect from various tiers signified by stars.

I would like to extend a special thanks to all of the people who helped me gather and log over 500 screenshots of data over the past 2 months while putting this article together.

This guide was developed by Foghladha of the Gaiscioch Community. If you're looking for a community focused on helping players learn the game be sure to search for "Gaiscioch" to get started in our community. We call Cloudwing Valley (NA-West) home and also host the bi-weekly War Report Livestreams.

This guide will be updated frequently so be sure to check back often. While our initial results compare over 500 screenshots, we hope to someday include thousands. As we gain more screenshots we will be sure to update our numbers.