Well, off for another run at obtaining my Griffon! I earned a bit more gold and rested up. Crystal Oasis has a few tough spots to fly to, but I’m sure I can do it with a little help from my friends. The eggs I am going after here are: The Warmed, Browned, Lustrous, Dusty and Ridged Coastal Griffon Eggs in that order. 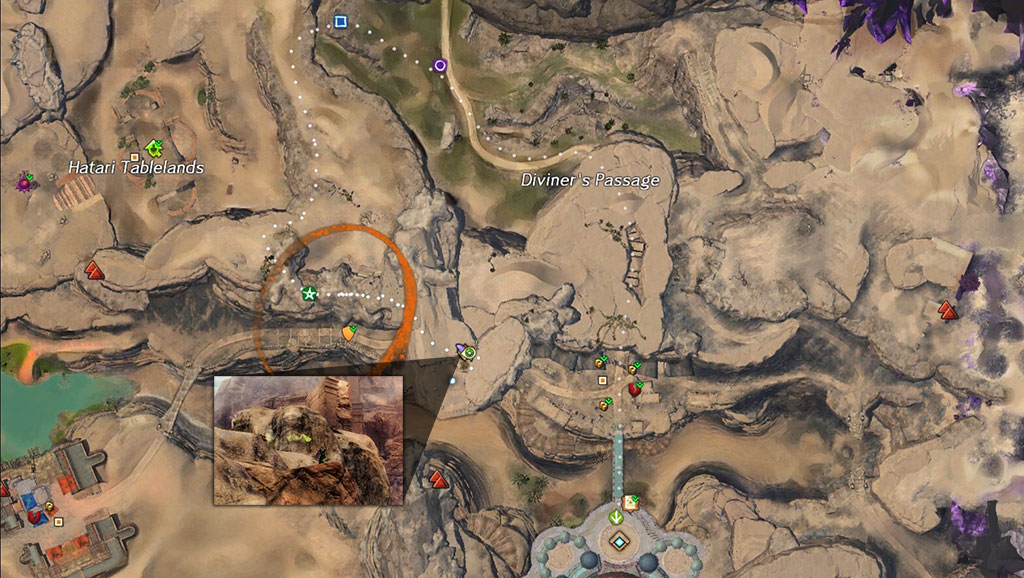 The Warmed Coastal Griffon Egg is the Roost that you can reuse in Crystal Oasis. Unfortunately, The Spearmarshal’s Plea does not work here. If a griffon is needed, it means going back to get another.

Go to Temple of Kormir Waypoint and head north up to Diviner’s Passage on you raptor. Turn west to get over the ledge using the raptor, then follow the ridge to the large rock structure. You will probably have to fight some scarabs and such before being able to mount again on your springer. Mount your springer and jump up to the nest, it is approximately 4-5 jumps to the top. 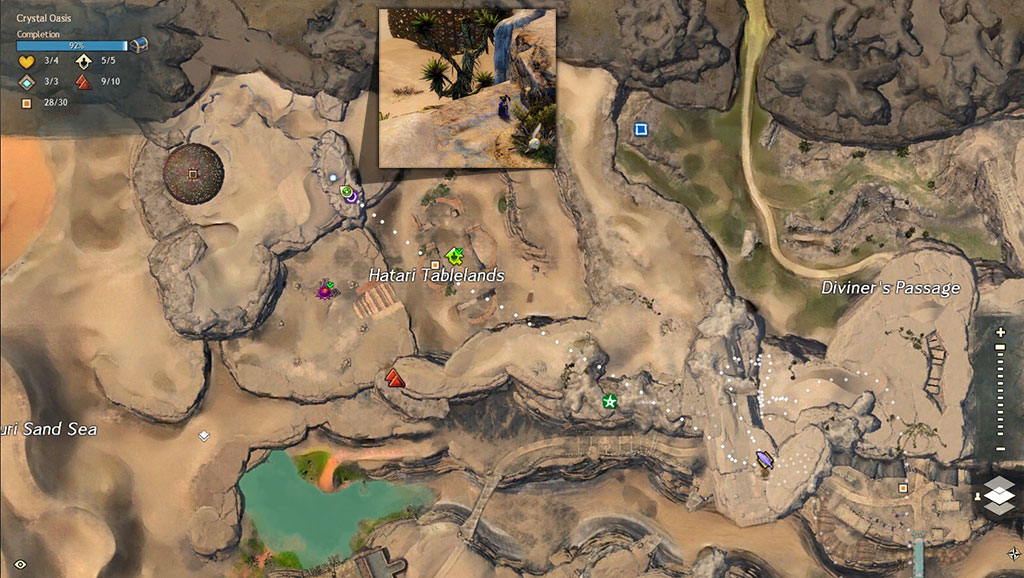 From the Griffon roost, go north toward the Hatari Tablelands and fly to the ledge where the nest is. If you miss you can jump up the ledges after fighting choya and get your egg.

Go to the Maculate Fringe and move up the jumping puzzle toward the mastery point. Once there, turn around and you will see a jackal port. Go through the portal and run down to the end of the sand path. At that point, look down at the pyramid structure and you will see the griffon nest. Glide down and it is in a little cubbie-type area.

Go down to the west of Kusini Crossing and use springer or raptor to go over a few outcrops. Then go to the left in the cave and spring up the ledge. Stay to the left. When you get to the drop off, look down and drop, on your jackel, into the first portal. There will be 2 more jackal portals to jump through. After you get past the last portal, run around the walkway to the highest part of the ramp. There is a spot that is close enough to use your springer to jump across to the top of the structure. Be ready to fight. Once you can mount again, you will find the nest on a pillar. Jump onto the smaller one and then hop up to get the egg. Mount your griffon and don’t forget to fly over to the north, where you will find a chest. 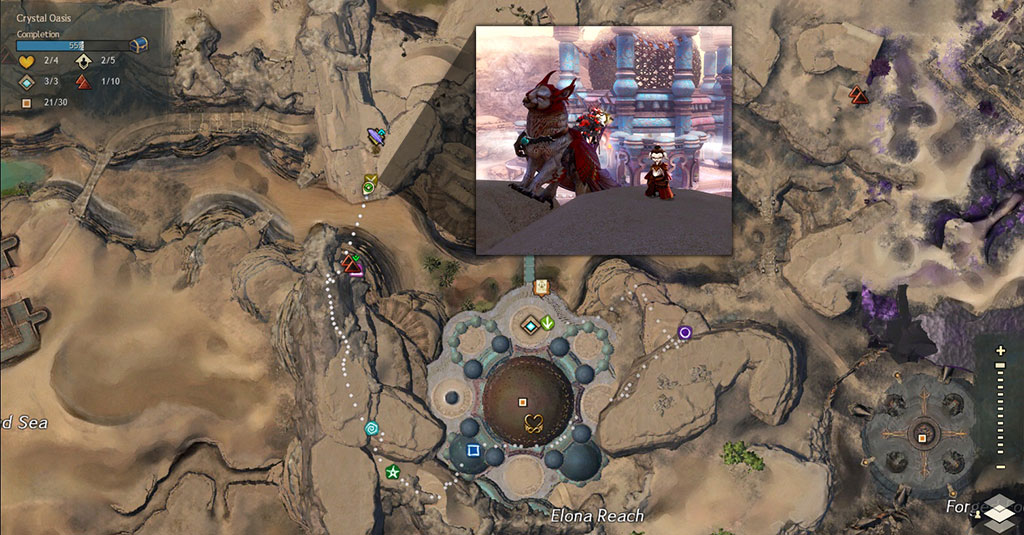 Start at Kormir waypoint, jump on your springer and head east onto the ledges and outcrops. Halfway through, at the back of the building, you will use the raptor to leap across onto the hill and move north. Traverse the terrain all the way up to the highest point and glide across to the ledge with the nest.

Gundayo, The Rune of Honesty

This was one of the toughest Runes to get, it is a bounty for the Corrupted Facet. Go to Destiny Gorge Waypoint and go north to the Bounty Board. Take the bounty then go to Temple of Kormir Waypoint and head east. Jump up the ledge and it will be within viewing range at the Maculate Fringe. I suggest getting a large group and have a team of 4 or 5 people just killing the crystals, as they send out sparks that heal the Facet. The rest of the team will work on the Corrupted Facet. Make sure the team does take a few hits on the Facet if they need the Rune. At the end of the battle, you will receive the Rune of Honesty.

Icon of the Goddess

Finish the heart at Temple Kormir. It is a matter of picking up the items and using them to heal the refugees. You can also fight to protect the area if the event pops. When you complete the heart, talk to Priest Hakim and buy the icon from her for 25 gold.

Go to the east of Amnoon Waypoint and help Priestess Karima feed, heal and give water to the refugees, you can also fight disillusioned refugees. Once the heart is completed, talk to Priestess Karima to get the Sunspear Tithe, it will also cost 25 gold.

Crystal Oasis was a bit tough, but I found Desert Highlands easier. Note that gliding skills would be helpful on a few of these nests. The eggs I am going after here are: The Warmed, Crusty, Rough, Vibrant and Damp Mountain Griffon Egg in that order. 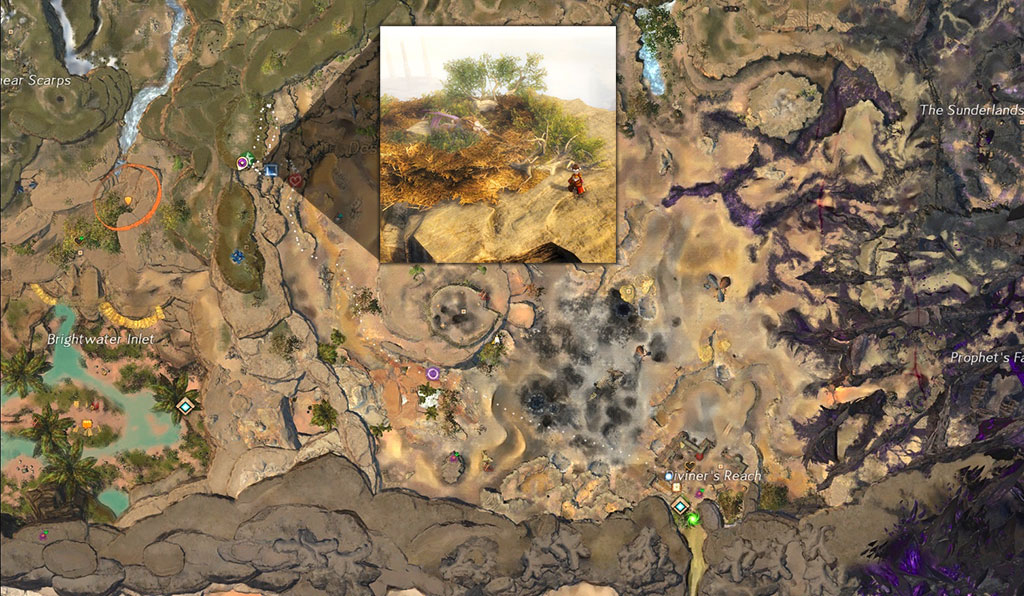 From Makali outpost waypoint - go east across the desert on your raptor. You will come to rock outcrops and will need to jump up to the top avoiding all the choya, snakes and sand sharks. When at the top turn north, run over the bridge and it is up on a ledge to the right. 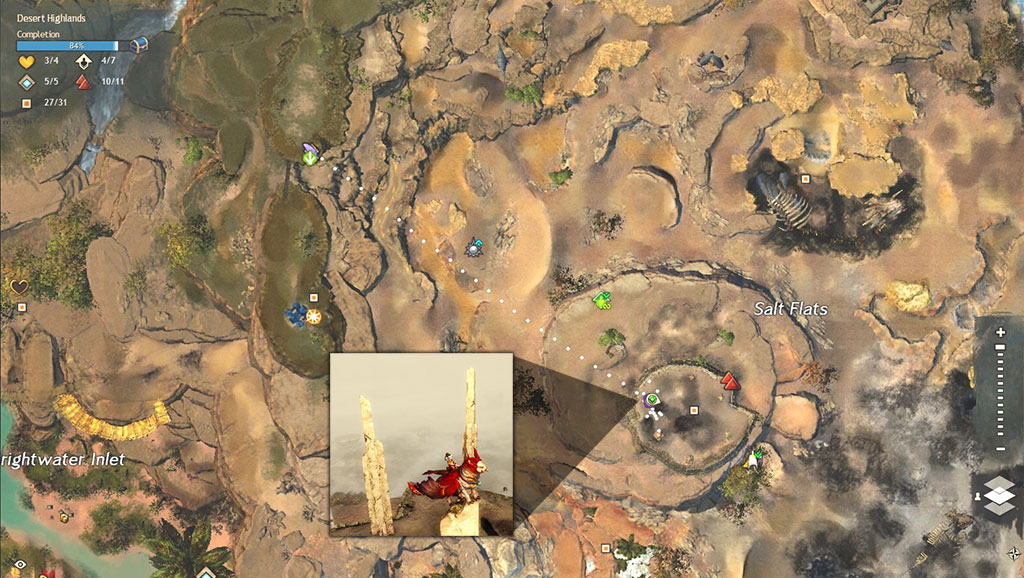 From the Warmed Mountain Griffon egg nest, fly east to the Salt Flats - Egg is on the pillar. If you miss it with your borrowed griffon, you can highjump on the springer. 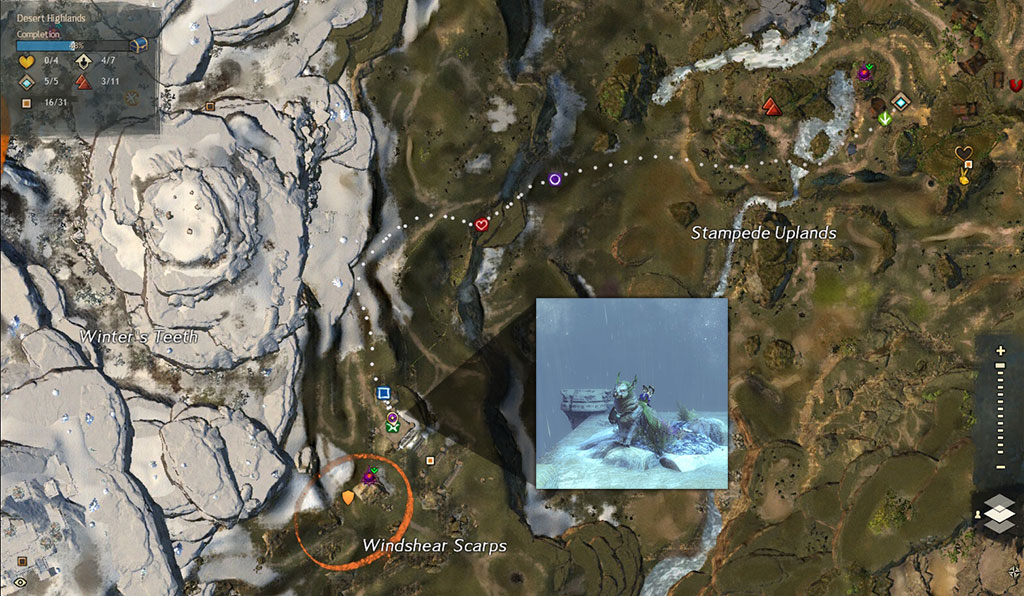 From Highjump Ranch Waypoint head southwest toward the Windshear Scarps. Hop up the ledges to the Giant’s pillar. Jump up, with your springer, on the north side of the platform to the griffon roost.

From Lommuld Krall Waypoint go southwest toward the rocks west of Salt Flat. At the end of the outlet, jump up with your springer to the top. You have one more jump up to the griffon egg. Don’t forget the hidden chest at the bottom of the rock, but you will have to fight critters there to stay alive long enough to open it. 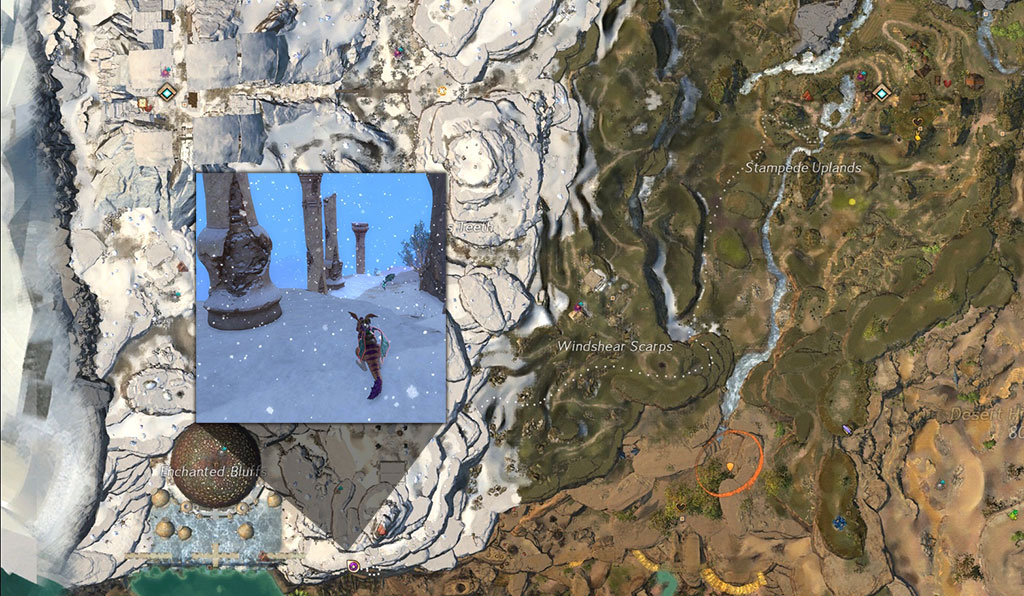 Go to Highjump Ranch Waypoint and mount your springer to hop the ledges at Windshear Scarps. Then head west toward the snow. Leap up the south ledges until you see the columns. At that point the egg is below the area at the furthest column on your left. Glide down to the ledge where the nest can be seen.

Zaklem, The Rune of Loyalty

This is a chain event that starts west of Diviner’s Reach - You start with a defense event in Diviner’s reach. “Second Spear Nayrim” will show for the event call. Then you fight the champ at the Kanuz Cach POI, in the water under the rocks. Once all the events are over, you receive Zaklem, The Rune of Loyalty.

Finish the heart at Lifeblood Ravine, then go to the heart person who is named Groffmok and buy the bird feed. Easy peesy.

Finish the heart in Diviner’s Reach, speak to Tendaji and buy the Survival Supplies.

You already have the Spearmaster’s Plea by now, so it is already in the collections.

So you have now completed Desert Highlands.

The next egg hunt will be in Elon Riverlands and the Desolation. For the ones that have finished, feel free to help a new friend that hasn’t. That is what Guildwar 2 is about. Teaming up and having fun!