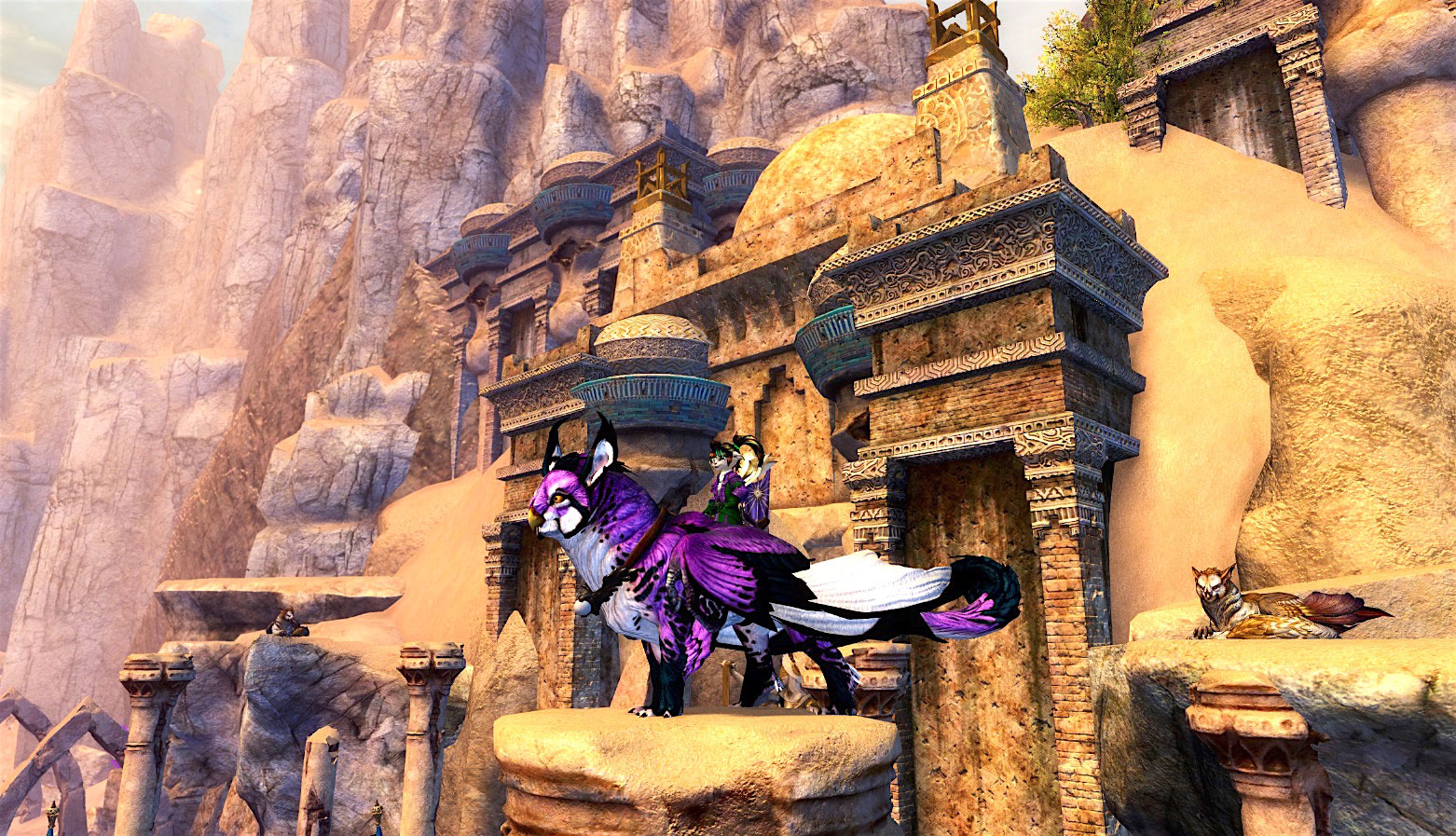 By this time you should have Open Skies: Domain of Vabbi, Crystal Oasis, and Desert Highlands completed. We are now at the last two zones to egg hunt, do our assignments and then the final couple of tasks to go! In this Guide, I will take you through two zones:  Elon Riverlands and The Desolation. After that we will have Open Skies: Sunspear Sanctuary, Sunspear Wisdom and On Wings and a Prayer.

From Olishar’s Oasis Camp Waypoint, go west to the tall rock. Use your springer to jump up to the egg.

From the griffon roost, west of Olishar’s Oasis Camp waypoint, you can fly southeast to the top of the tower below the vista. It is located next to the Arid Gladefields.

From skimmer ranch waypoint, go southeast to the large rock and jump the ledges to the top with your springer. It seemed to be very rainy and dark when I went. On the map, follow the markers in order of green arrow by the waypoint, purple circle, red heart and then blue square.

Golsah, The Rune of Honor

Go to your achievement panel and search for the Equipment Tracker achievement. You will need to speak to Shadi in the Northwest corner of Elon Riverlands to get the achievement started. Find the items throughout Elon Riverlands and to make this more fun, take a friend or two along. They are listed below:

At this point, you go back to Shadi for the Ruin of Honor.

Head to Augury’s Shadow waypoint and head north. When you get close to the top, the heart is to your west. After doing the heart, you can buy the Relic Preservation Materials from the heart vendor. 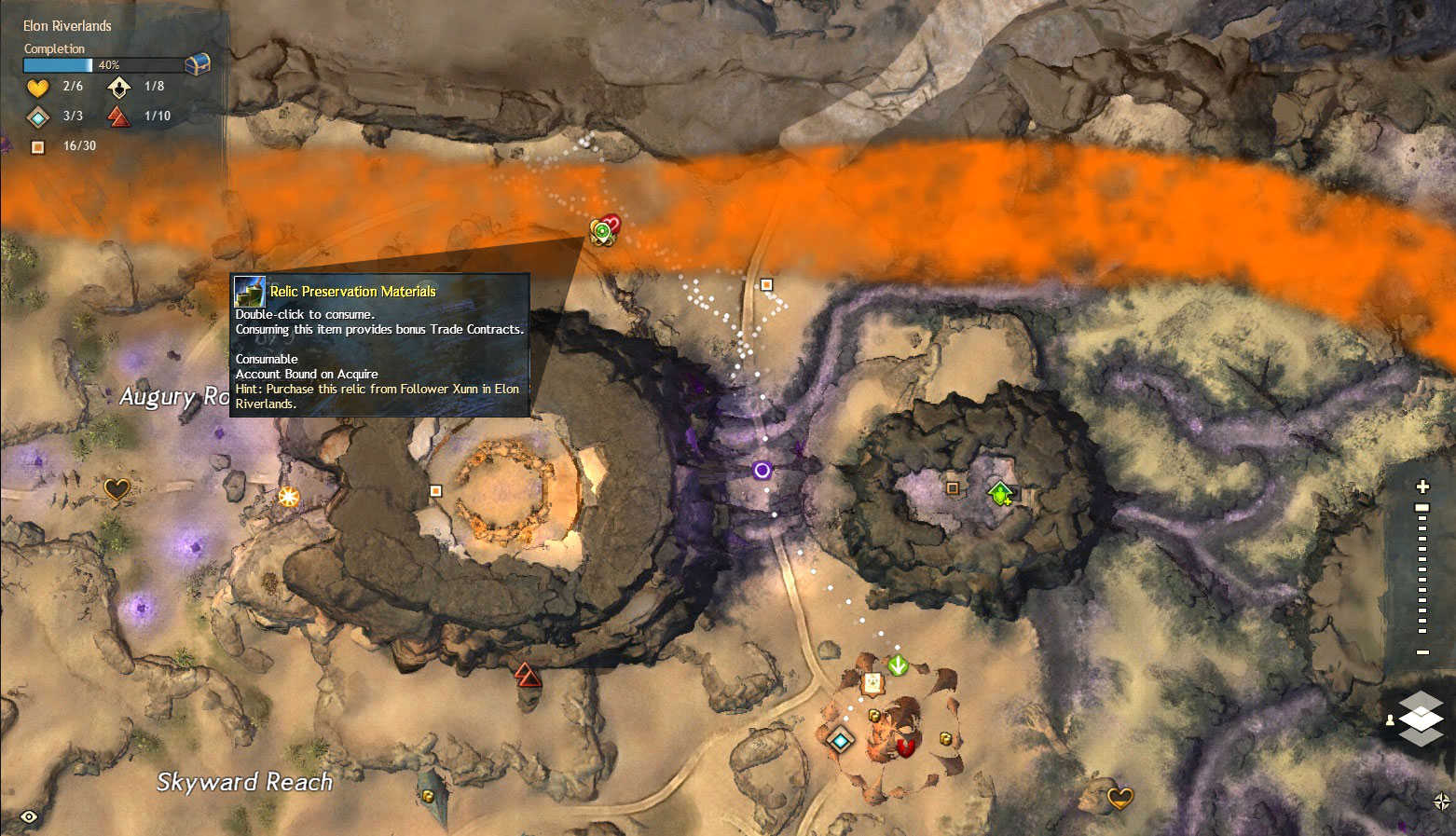 Maps to the Outpost

Complete the heart at Olishar’s Oasis Camp Waypoint  and then buy the maps from the heart vendor.

Limwe, The Rune of Justice

This is a group event chain. Go south of Olishar’s Oasis Camp Waypoint, talk to Field Foreman Erran, when the event pops up. Protect him as he tries to rescue Emara. This will lead you to the battle with Warden Jabari.  Note: you need a large group for this one. After you have defeated him, you will get the Rune. 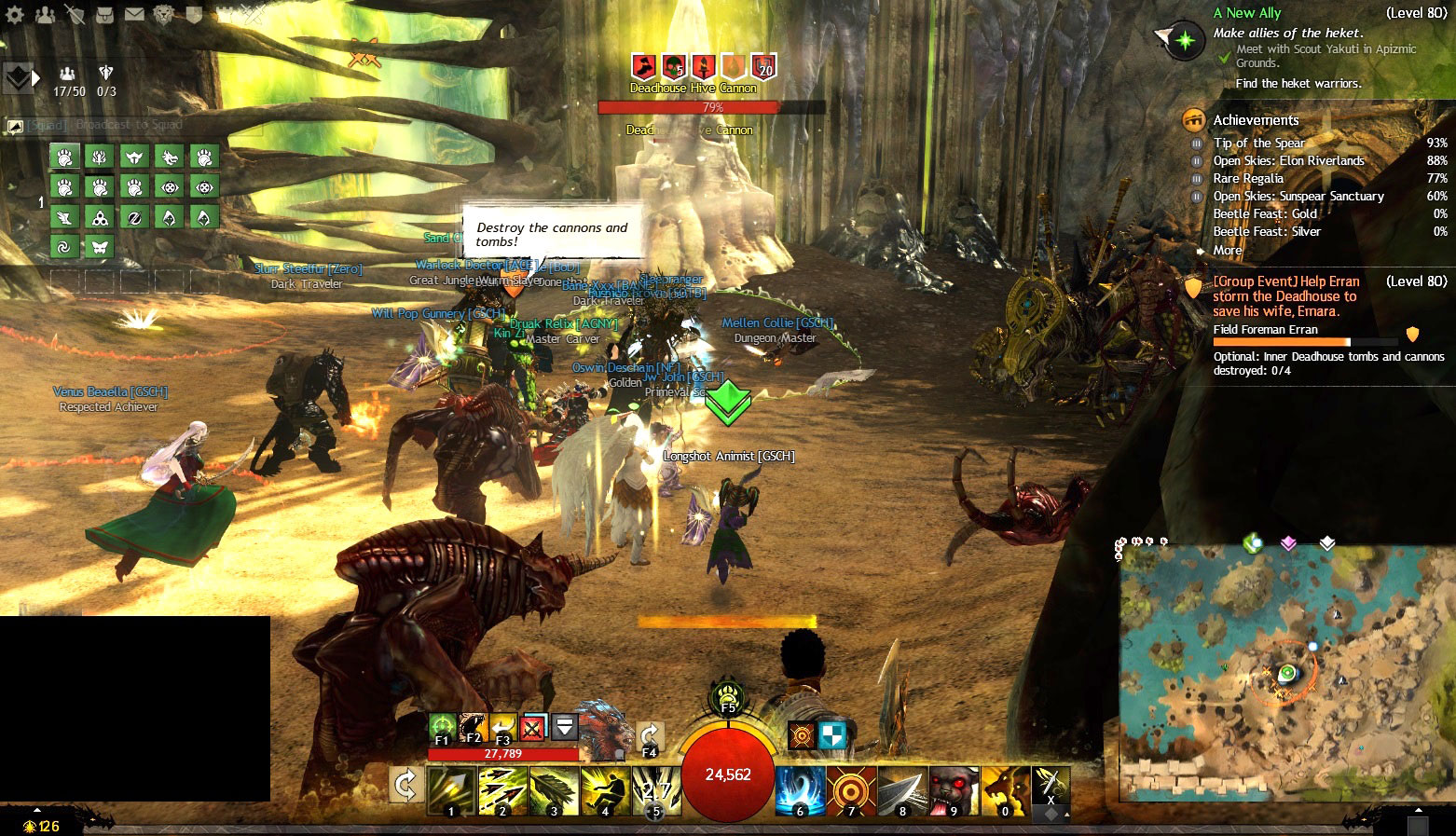 Giwebo, The Rune if Humility

This is another group event to defeat the Champion unbound djinn in the southwest corner of the map. The event starts with a collection gather of memory fragments, then the Unbound Djinn appears to fight. This would be better fought with at least 4 people.

From Scourgeway waypoint follow the road south through the broken buildings on the left and find a place where you can jump up on your springer to the top nesting place. Note: The ring structure you see in the picture above, is the next nest. On the map below, go in the following order: purple circle, red heart, blue square, and green star.

From the roost you can fly north to a ring-type structure, the egg is sitting on the top of the ring.

From Scourageway Waypoint go northwest where there is a monument-looking rock that you can jump up to with your springer. The jump was tougher than I thought, but made it up from the opposite side of the ledge that the nest is sitting on.

From Darklands Waypoint go east around the rock face. I used my springer to jump down and across the ledge, then sprang up a rock face to the egg. Go from green arrow to the red heart to the blue square and up to the top.

Ashhe, The Rune of Valor

Go to Darklands Waypoint and head southeast to the camp. Talking to Redeemer Kossan will start an event. Just follow the event and you will get the rune at the end of the fights.

Virzuk, The Rune of Compassion

Go to the Lair of the Forgotten Waypoint and complete the heart. You can then buy the flags from Dunkoro, the NPC.

This is another heart to complete at Bonestrand Waypoint and buy the lights from Kisha, the heart person.

That Completes the Desolation.

When you have completed that, Open Skies: Sunspear Wisdom will be unlocked.

Sunspear Wisdom is a collection that you have to retrieve from the Library in Kormir’s Sanctum. This instance is a lot more fun if you bring a group along to help! Go to the Tomb of Primeval Kings, run to the back of the tomb, interact with the door and enter the portal. It will port you up to a library where you will find the books. 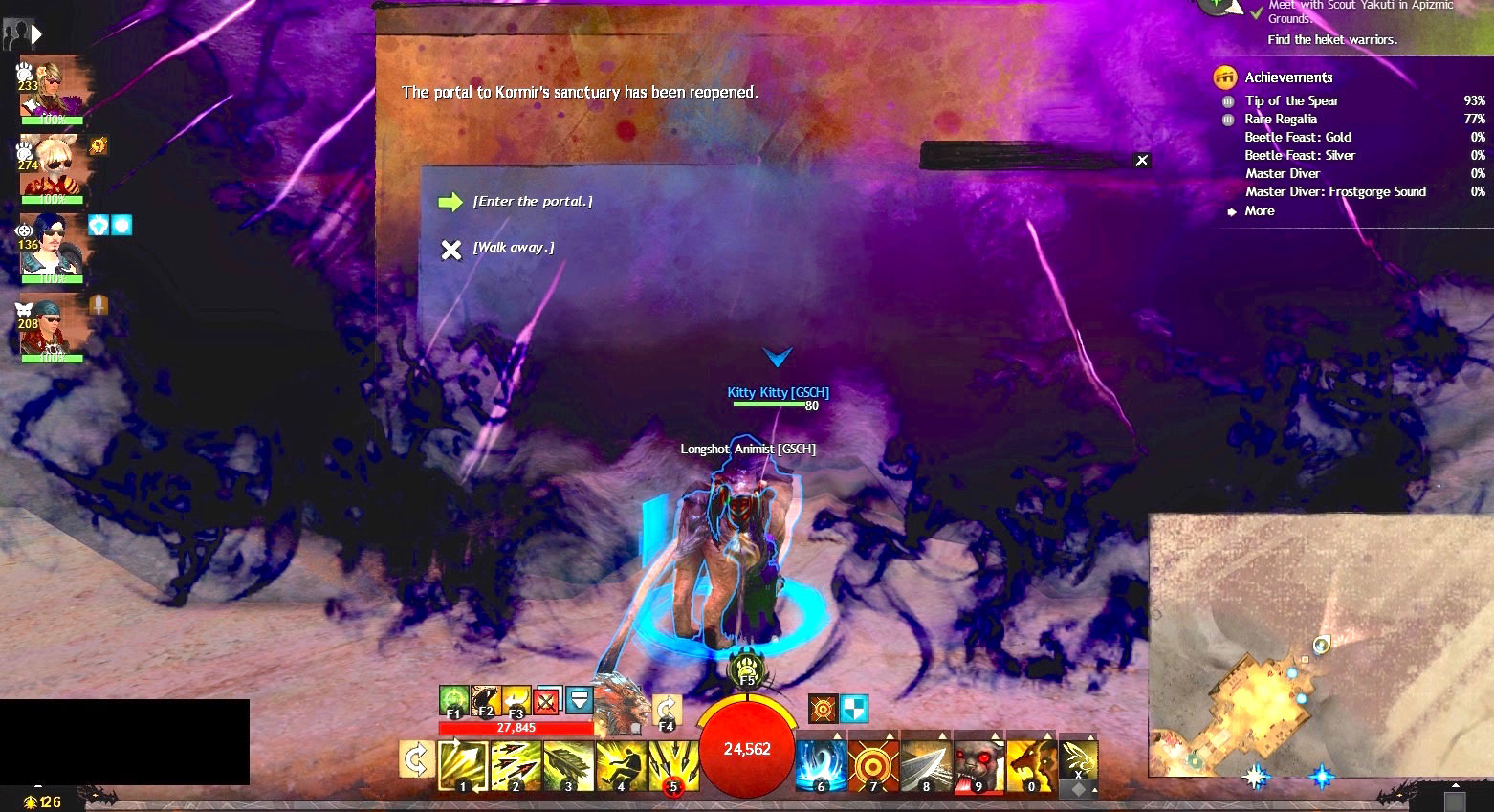 First step is killing the elites to get the keys to unlock the chests that have the Cache of Sunspear Wisdom. This is where your friends will come in handy. They will help find the elites and fight them with you.

There are no labels on the map, but you can figure out your way around. I found going around the bottom circle and then up the stairs to the top and around the upper circle was helpful. Taking the inner circle then the outer circle, I found most of the chests. I did not get them in order of Volume, but for this article I put the volumes in order. If you look at the minimap on the pictures, you can see approximately where I was.

Now to collect 10 volumes of Sunspear History in the Cache of Sunspear Wisdom chests from Kormir’s Sanctum:

Open Skies: On Wings and a Prayer

At this point you have the books and all you have to do is place the Writings of the Last Spearmashal on the pedestal in the Sunspear Sanctuary. To do that you will have to fight the Champion Mordant Crescent Hierarch. In this battle, at 25% intervals he will become protected by a dome and you will need to mount a griffon and fly to the top of the dome and press #1 to break his protection.

Keep on fighting until the Champion Mordant Crescent Hierarch is down. I didn’t pay attention to his other companions, I focused on him. Once you are done, everyone cheers and you receive your griffon.

This was a very long quest but was well worth it. I wouldn’t change the way ArenaNet planned it. The Griffon wasn’t just given to you and it made me feel like I really accomplished something. Enjoy this achievement by bringing your friends.