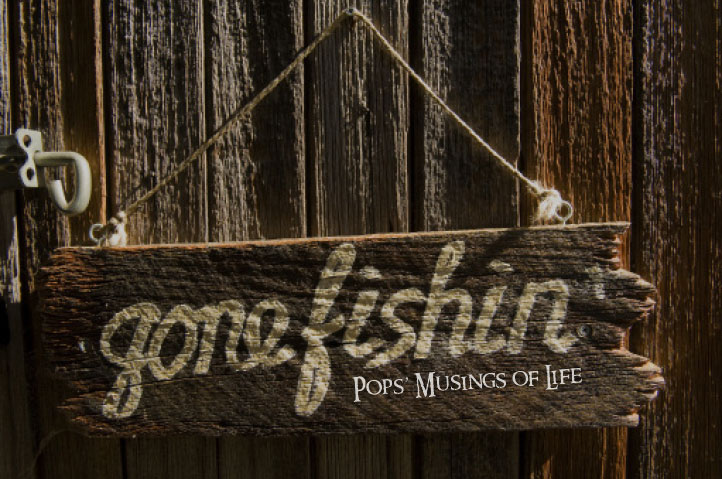 In ESO, while fishing the other day with Verve, Khaleesi, Prissy, and a few others, I asked what I should write about. One of the crew said “FISHING”. My answer…?  I’ll do it.  And I told them it was a great idea because I spent my whole life doing just that. I was a fisher of fish, not a fisher of men.

It was once said “Feed a man a fish and he eats for a day, but teach a man to fish and he will eat forever.” That is definitely true, but they never mentioned the calmness, serenity, and frustration that fishing can bring to one's soul.

My earliest recollection of fishing was with my grandfather. We’d walk down to Red Arrow Park,  to a place we called “The Pocket”. It was a large pond-like area with both an inlet and outlet to Green Bay and eventually, Lake Michigan. We would catch perch by the hundreds (in those days there were no fish limits). It was fun, until we had to clean them. The first time I cleaned fish, I screamed I was being tortured, I was sick, and a few other excuses. My Grandpa saw through it all. I was doomed to cleaning fish for the next 3 hours or so. As I grew older I fished the “Pocket” less and less. Last time I went there the water level was way down, water was dark, and overgrowth was taking over. It was giving way to swamp status, cattails, mud and almost no fish at this point… I cried. I did cast a line and caught a 16” largemouth bass. I had that fish mounted and it hangs on my wall today, representing the death of “The Pocket.”

As I entered my teens I found out about trout, an elusive fish that was fun to fish and better to eat. A.K. Best had it right. He said, “The fishin’ was good, it was the catching that was bad.”  And so it goes with trout. As I entered manhood, I waded the streams, floated and boated them.  I fished lakes, ponds, rivers, and creeks. If it had water, I tried to fish it. I must have been good at it. I always (well, ‘most always) won the bets among my fishing buddies… the largest fish and most fish caught won the cash. I had pictures taken of the fish and framed them. The  pictures of my buddies were framed and hung on the wall also, they were what I called my “Wanted Posters.”  They still hang in a place of honor at our cabin, to be showed off and discussed when all or any of my fishin’ buddies are visiting (read fishing). The antics of those visits may be published later, but the statute of limitations hasn’t run out yet.

Earlier, I mentioned my place up north. It was a year-round house on the lake (Townsend Flowage I think they call it now). When life was in turmoil (and hectic was my middle name), off to the lake I would go. I’d grab a rod and reel, tackle box and bait, and you know where I was going. I’d hang a “Gone Fishin’” sign on the door, put on my favorite (lucky?) fishin’ hat and in a flash… I was ”Gone Fishin”. The flowage contained almost every type fish available in Wisconsin. I typically didn’t care what I caught. Sometimes I wouldn’t even wet a line. I would sit either on the shore bank or in my boat and just watch the fish jump, eagles circling overhead, looking for their dinner, sometimes finding it. Maybe... no, for sure, this was fishing. The peace and serenity it brought was a lifesaver to me. I regenerated, I recharged, I was ready again, until the next time.

One beautiful day during the spring, I heard a rumor of a giant tiger musky going over the dam when it was opened to let the level of the lake subside. The dam was hand operated by a dam tender. There was a big wheel type thing he would turn, like a captain steering an old galleon. Didn’t know if he told the truth or was just a “dam” liar. Spring fed, the water from the dam formed a pond the size of a football field. This was called the headwaters, and it formed a relatively small stream called the McCaslin Brook. And what glorious trout it did hold! I fished that stream many an early morning, into the time of the first crickets of the evening. Another time, another story I guess… back to that dam pond. I heard the rumors of that big Musky and spent a few evenings at the pond fishing. This was actually the pond where I caught my first trout. My grandpa (go figure) was fishing there; they were staying at the cottage. I went down the little grassy bank to the pond and visited with him. He asked if I wanted to fish, I said yes, he said okay, handed me the flyrod and he headed up to a little nearby bar for a beer. Of course, Gramma, my folks and the neighbors were all at the bar too. What he had handed me was his prized hand-made bamboo fly rod and some bait. Two (2) minutes after he left, I caught a big fish. I didn’t recognise it, but I swore it was kind of like a trout, but a different color and size. I dragged the fish up the bar to show it to Grandpa. I know, you think I caught the musky, but I didn’t. Instead, I caught a 24” German Brown trout. The folks and neighbors all looked at me with admiration and awe. I even got a soda and a candy bar out of the deal. It was once said that “bragging may not bring happiness, but no man having caught a big fish goes home through the alley.”

From fishing I’ve learned life is good. Take your time, life’s too short. Enjoy every day, even the crappy ones...always look for the positive. Alway use your “call a friend” lifeline. And as my friend Donny Moss always would say, “Never give up!”. And Donny never gave up: he passed away while ice fishing, 28 Feb 1999.

Fishing has taught me many things about life over my lifetime. I’ve learned patience. Keep calm, always do the right thing, and it will always get better. I’ve learned to enjoy my surroundings, my friends, and a good song. I enjoyed that little pond and a big trout. I miss my folks, my grandparents, my friends. I even miss that tiger musky in that pond. I searched and fished for that monster for 20 years. I always believed and never gave up.  I cried 3 or 4 times writing this, just remembering times, things, and the people involved. The biggest thing I’ve learned from fishing is that all fishermen are “dam” liars.