The fate of the world continues to hang in the balance. Two ancient Elder Dragons encroach on Tyria’s frontiers, and crippling internal strife has brought the seat of humanity to its knees. Today, we find out if Tyria plunges into the abyss or if it can avoid impending doom, with the release of Living World episode five. Flashpoint follows a three month hiatus since The Head of The Snake slithered into light. Following the White Mantle’s audacious strike on Divinity’s Reach, things have scarcely looked worse for Tyria’s heroes. Yet, a slim chance of victory still exists as episode five opens. 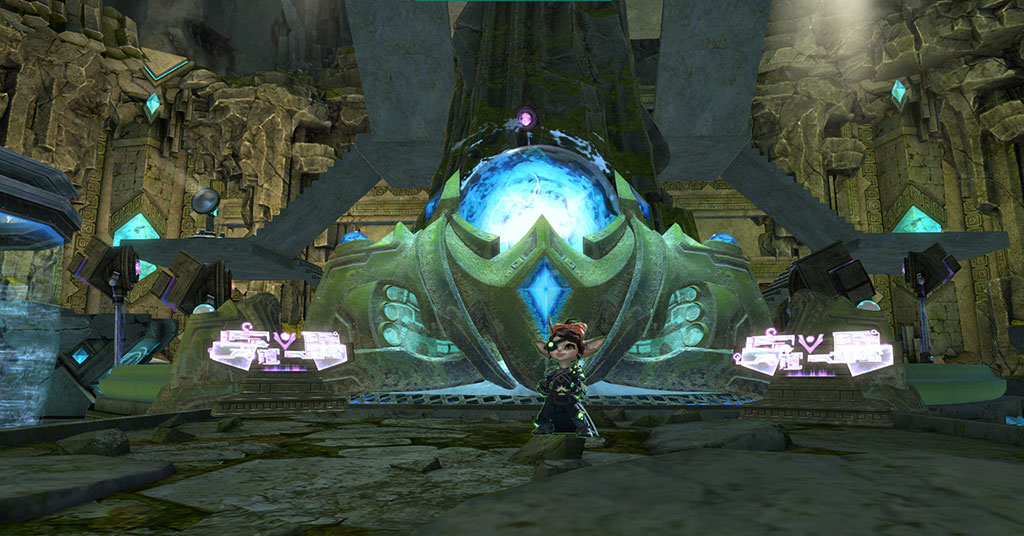 ArenaNet’s latest adventure opens in a familiar Asuran Laboratory, one of many dotted amongst the remains of Rata Novus. These regularly act as staging areas for the Living World story and Flashpoint, once again, returns players to this Asuran labyrinth. Taimi’s newest toy, and Tyria’s only hope, rests at the center of this instance adorned by a massive pulsating globe of light. The central character’s arrival is followed by a slightly uninspired opening sequence that feels eerily reminiscent of Canach's arrival in Rata Novus. A combination of skittish Asuran lab rats and sloppy workmanship results in a mishap that leaves dragon minions skittering across the lab floor, terrorizing its occupants. After a mildly unnecessary choice of opening, and the opportunity to punch some dragon minions in the face, this scene takes a much more dramatic turn.

While Scarlet Briar may have remained a clear and present antagonist throughout the inaugural Living World season, the recent appearance of Lazarus has remained cloaked in uncertainty. Sleight of hand and misdirection still obscure the true face of this season's enemy and any illusion of optimism is unceremoniously shattered during Flashpoint’s big reveal. A short series of fetch and carry quests and some exposition are a precursor to a revelation of seismic magnitude. It is as shocking to the audience as it is to the characters on screen and a commendably brave move by ArenaNet. Instead of squirreling the twist away for a cliffhanger, this unmasking lights the fuse on the close of season three, effectively ratcheting up the stakes even further and sending Dragon’s Watch on a race against time to catch an enemy they are massively unprepared for. 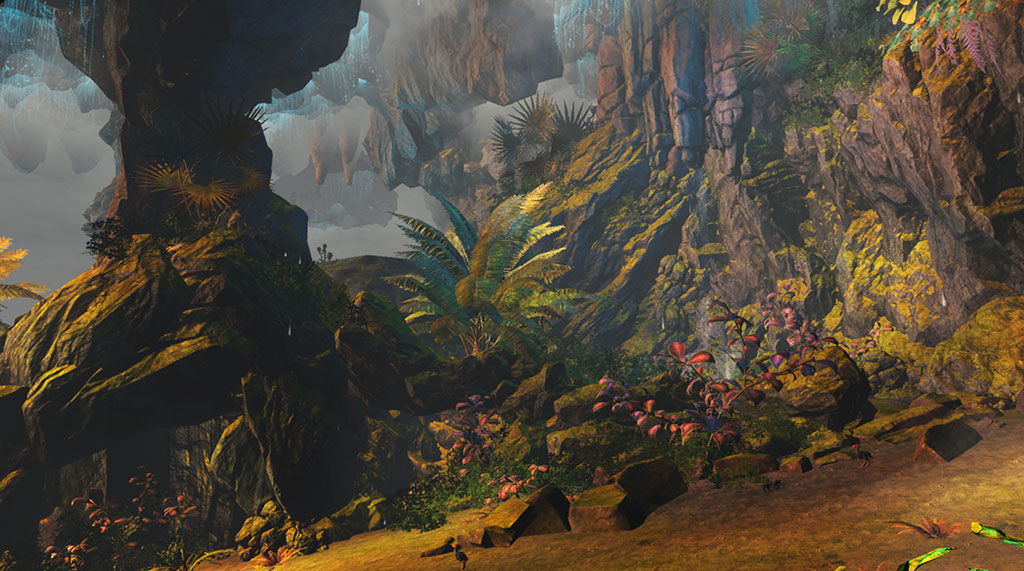 Following familiar precedent, the race to track down a new enemy introduces players to a new region of Tyria. The Mantlerock Scald is a cavern, situated just below the Ring of Fire islands, and is an absolutely gargantuan chunk of content. The walls of this hollow monstrosity stretch further than the eye can see and a wisp of clouds hang just below the roof of this subterranean map. It represents the largest interior setting that ArenaNet has ever produced and contains at least three distinct levels of content. As players follow the immense crystalline firestone that sprouts from a boiling lake, the ground gradually turns to ash. Scarred by volcanic activity, the Scald’s verdant carpet quickly turns from a colorful garden into a lifeless industrialized waste. 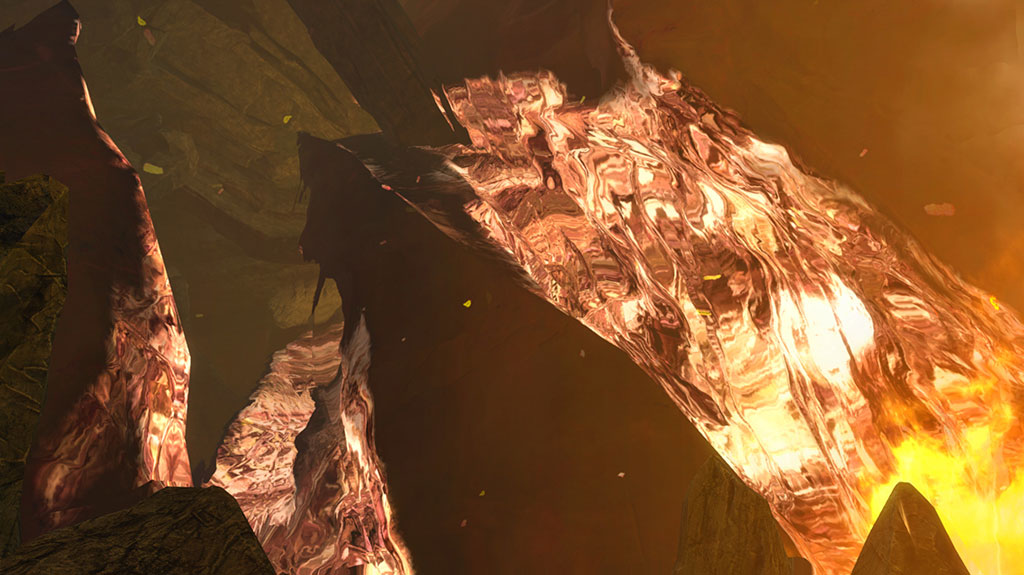 Mercenaries patrol the barren summit of the map, where they can be found building weapons of war and toying with bloodstone magic. Inquest looters teleport into the gardens, while a variety of Tyrian wildlife and dragon minions graze the lower regions of Mantelrock Scald. A series of appropriately themed events occur throughout the zone, although things can feel a little quiet at times due to the sheer size of the Scald. Pact troops need rescuing, local wildlife has to be subdued, and mercenary agitators require quelling. As with previous Living World episodes, a map wide meta event cycles through the zone challenging players to stop a series of destroyers from massing. Again, as per normal, Mantlerock Scald rewards players with two types of currency. Unbound magic continues to act as a common form of tender throughout all Living World zones while Primordial Orchids are new to Flashpoint. The usual range of materials, magic, minis, and a new home instance node are present, as well as a brand new backpack to build.

It is the joy of exploration that really makes Mantlerock Scald worth a visit. Ley line flows, bouncing mushrooms, and thermal tubes cover the zone, making existing movement masteries instantly useful. The newest mastery line completely opens up the Scald and makes exploration an absolute delight. Unlocking this skill gives players access to pick up and use the Oakheart’s Essences that lie dotted around the environment. Taking the concept of a grappling hook, which ArenaNet considered introducing as far back as episode two of this season, modifying and enhancing it provides players with some incredible vertical mobility. Oakheart’s Essences throw out a sticky green tendril, dragging players towards any surface, in any direction. With three uses, skillful adventurers can even chain Oakheart’s Essences together to turn Tarzan, reaching any ledge, uncovering every hidden passage, and discovering the massive cache of lore that is hidden across the cavern.

Thankfully, the challenges that lie ahead are far from insurmountable. A series of straightforward quests stand between players and the remainder of the story. ArenaNet has not included content participation as a gating mechanic this time, a welcome change from episode four that fits with the Guild Wars 2 manifesto. Other positives for episode five include far more incidental moments. Dialogue between Marjory and Kasmeer, during the opening sections of Flashpoint, cut through the noise of war and draw players into the personal lives some deeply complex and human characters. It is moments like these that encourage players to invest time in Tyria and writing like this makes me care about what happens to Dragon’s Watch.

Spoiling the finale of this episode would be utterly unforgivable. Instead, log in now and play a must have moment in Guild Wars 2’s history that expertly blends old and new. Players who have already purchased Heart of Thorns can bank Flashpoint for free and find out how the episode threatens to change Tyria forever. 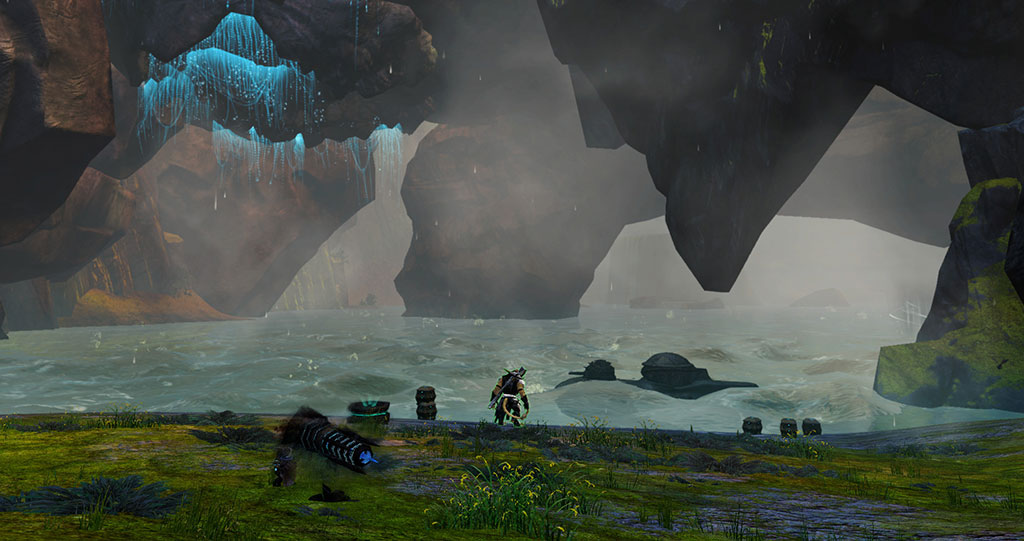