Goblins! Squirrels! Loot! A first look at Guardians of Ember

Guardians of Ember is the latest in a line of titles to be imported to western shores by Insel Games. This hack and slash adventure pits players against a world of magic and monsters, combining classic dungeons crawlers with the massive playable realms of the Massive Multiplayer Online Role Playing Game. Guardians of Ember is available as a buy to play title right now on Steam’s early access platform, so we went ten rounds with Taiwanese developer Runewalker’s latest.

Like Trion’s Devilian, this title takes a third person, isometric view of the world. Created with Runewalker’s own RENA engine, Guardians of Ember already looks incredible. Whether it is due to the aspect changes or simple advancements in technology, this title’s visuals easily outshine those of Dragon’s Prophet, Runewalker’s 2013 MMORPG, which was also created using RENA. The lush meadows and forests of Olyndale are impressively detailed and seem to hold up well on a range of machines, consistently tumbling out of my screen at over sixty frames per second. Even the character models and user interface poses level of quality that surpasses the bargain basement budget that burdens many early access titles. 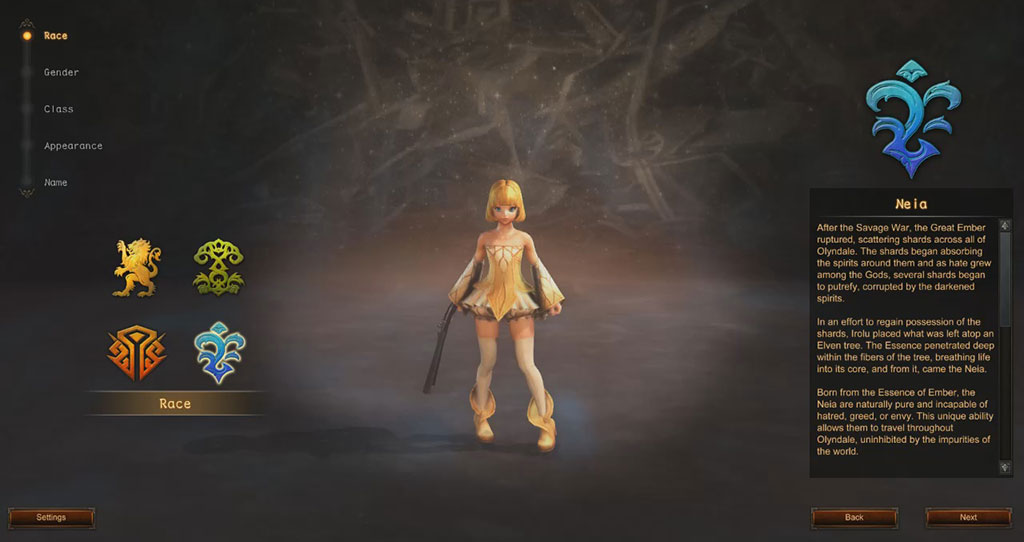 Character creation is similarly consistent. Four races populate the world. Cardboard prefab Humans, Dwarves, and Elves are joined by the Neia. A race of child like beings, the Neia are magic and nature. They come from an ancient tree but look nothing like Guild Wars 2’s Sylvari. They are, however, instantly comparable to Blade & Soul’s Lyn, Devilian’s Cannoneer, or a dozen other child like races. Despite this, the Neia still feel sufficiently fresh to make character creation relevant and introduce some much needed diversity. Even across the more traditional races, a good selection of facial presets, height changes, and muscle sliders are available. Over twenty individual body measurements can be modified on a character and it is all complimented by an even wider range of hair, eye, and skin complexions. The RENA engine does a great job of translating these selections into the game and while it cannot hope to compete with games like Black Desert Online, arguably the current gold standard for character customization, I still managed to lose thirty minutes debating which unnaturally vibrant shade my hair and eyes should be.

Taking those first few steps from the character creation screen into a new adventure can go wrong in so many ways. Torturous exposition, broken mechanics, or simply no direction can end in blinding frustration. Thankfully Guardians of Ember has an intuitive WASD control set, allowing you to instantly start exploring the opening town of Rye Ridge. This welcoming little town is full of traditional NPCs, instantly recognizable shops, and even a fishing merchant. After clearing out an intimidating, if somewhat harmless, troll, the quests at Rye Ridge send players skipping out into the surrounding forests. A mix of menial tasks await from delivering messages to chasing down goblins, but this is only the first few levels. A suitably prominent mini map provides clear pointers for the uninitiated and the consistently linear quest lines do tend to follow the natural flow of the landscape, making it incredibly difficult to get lost in the wilderness. These quests, which can sometimes fall into an uninspiring repetition of fetch and kill, are interspersed with a regular series of dungeons. They are a welcome opportunity to find glorious loot, change the pace of play, and challenge the nastiest enemies that Olyndale can throw at adventurers. These particular dungeons show some definite promise while maintaining room for improvement. The linear layouts which fill the dark caverns and rocky cliff sides of early arenas are patrolled by repeating waves of trash, followed by something with a bigger health pool. While this is acceptable for early dungeons, predictability quickly comes at the expense of engagement. Boss encounters are sometimes unique, but more often do not require any real ingenuity. Dungeons continue to compound this problem as the trudge through trash gets longer but not any more dynamic. For now, early dungeons come in two difficulty modes. More stars designate a higher difficulty and although dungeons remain challenging, they are not overwhelming. Extra difficulty levels, more dynamic encounters, and less trash mobs would benefit the dungeons. I do expect Runewalker to enhance the overall experience before Guardians of Ember launches.

Players can crawl the dungeon corridors blowing away any unfortunate goblins, bandits, and even the odd bear with a set of active skills that are evenly distributed across the bottom of the screen. Control systems are satisfyingly responsive but do start to run into difficulty as combat breaks out in earnest. Particularly peculiar is Runewalker’s use of the same mouse actions to target, attack, and move characters, which results in party members randomly veering off into the surrounding undergrowth while a scurry of mutant squirrels go nuts around you. When compared to other recent dungeon crawlers, such as NCSoft’s Master x Master, combat does not feel nearly as dynamic or fluid as it could. A lack of any dodge function makes telegraphing feel a little pointless and the fixed camera angle makes Guardians of Ember feel more cumbersome than it really should. Although movement could benefit from further work before release, class systems are reassuringly well developed at this stage. Stats, skills, and character progression are all in place and provide an abundance of builds for any character. Leveling up rewards players with points to spend on four primary attributes, seventeen secondary stats, over three hundred active and passive skills, and a cavalcade of weapon choices, all of which knit tightly together to create an intricate maze of decisions that could almost leave new players a little bamboozled. 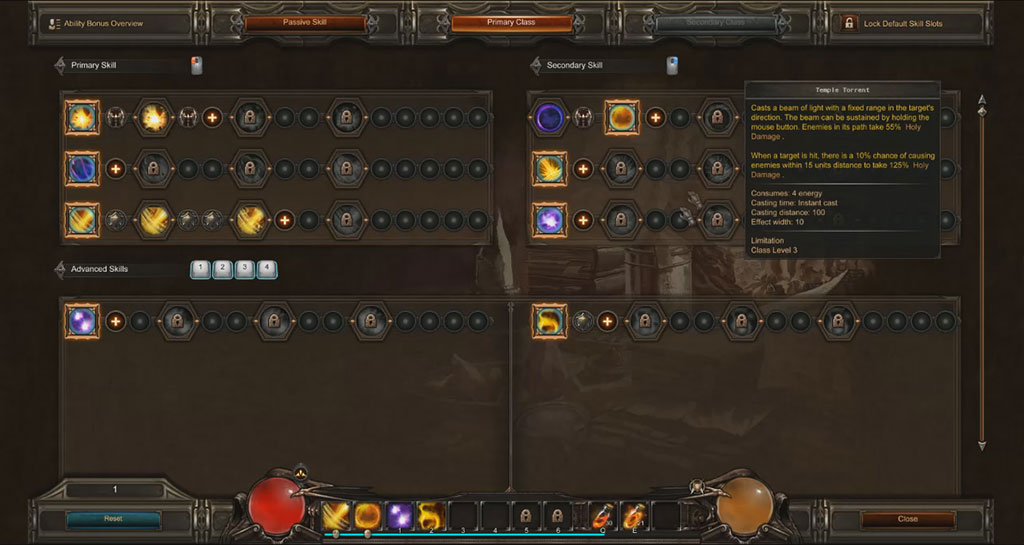 In many ways, the class system is indicative of Guardians of Ember’s current state. It is a beautiful piece of work and manages to exceed my expectations on some levels. The character design, class systems, progression, and environmental art all stand up very well against some of the biggest names on the market. Other systems, however, are clearly still incomplete or bear some hangover from the original Taiwanese free to play model. Guardians of Ember is still in flux, but if it manages to master its own combat, content, and challenges then Insel Games could have a very solid success on the horizon. You can follow Guardians of Ember on steam.

About Guardians of Ember

After years of war the world of Olyndale has descended into chaos.  As a Guardian of Ember, your brotherhood marks the last line of defense against a dark menace. Sinister forces threaten the land and can only be stopped by the ancient Ember. The future of Olyndale lies on your shoulders. It is your fate - and your duty - to retrieve the magic stone and bring back peace to Olyndale.  Choose from six different classes and extend your skill set by selecting a secondary classafter reaching level 15. A variety of 58 different regions with over 60 randomized and challenging dungeons await, where you battle against monsters, mortals and the living dead during your crusade to retrieve the Ember.  Developed by the hardcore gamers of Runewaker (the team behind Runes of Magic and Dragon's Prophet), Guardians of Ember is a unique combination of Hack'n'Slash and traditional MMORPG with a focus on action oriented combat in PVE and PVP as well as near endless character optimization.