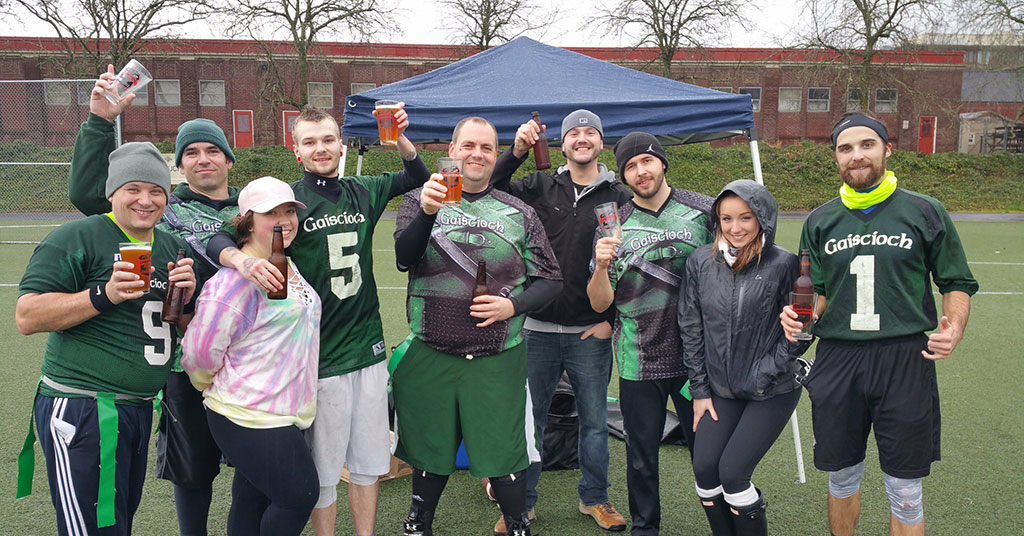 It has been one of the most brutal winters to date in Portland, Oregon. The Gaiscioch competitive men's 5-on-5 Flag Football team took to the field to not only battle high winds and rain, but also snow, sleet and hail. Several games were absolutely miserable, but that didn't stop the Gaiscioch drive to succeed.

The past few years have been rough for Gaiscioch as they've cycled through team members. They were merged with another team and then had that team split and take all but 3 of their team members. With Josh Hvass, Benjamin Foley, and Don Rush as the core they brought back quarterback Anthony Davis to give them a bit of a gunslinger edge.

They set off on a quest to rebuild the team with fresh blood and skill. Don Rush brought two of his friends Anthony Holloway and Ethan Moreland onto the team. As luck would have it, they'd run across a new transplant to the Portland area. Jamie Goodwick joined the team the week he arrived in Portland. Lastly, Josh brought his friend Bryce Hacker onto the team as well as his uncle, Brandon Scott.

With this new team, they set off on a course to rebuild the team and regain their championship title. Unfortunately their primary quarterback, Anthony Davis would be taken out of the game due to schedule conflicts and bad weather making driving to Portland much more difficult from his southern Washington home.

This is where backup Quarterback Benjamin Foley took the helm of the team and led them to a 3-1 regular season record. Playoffs came and the Gaiscioch stood before their longtime friend and rivals, Lollygaggers who were going by the fun name "Do You Know Chaka Jones?" in honor of one of their team members.

The Gaiscioch had only defeated them once before across their 6 year rivalry. The last time they won was 2012 and just so happens to be the first playoff game Benjamin Foley ever quarterbacked in the league. In that game the Gaiscioch defeated them 77 to 58. Could Foley deliver the same victory after 5 years of losing to the Lollygaggers?

The game started off close but the Gaiscioch held in there. Turnovers and miscues lead to the Gaiscioch breaking ahead by second half. The second half lit the fire even hotter as the Gaiscioch swept their opponent 58 to 24. The next challenge would not be so easy.

The last challenge in the league stood in the form of the Hoodrats, who earlier in the season Gaiscioch managed to defeat with a last second sack with a lead by 1 point. But the Hoodrats had never seen Foley play QB. In the original face off primary quarterback Anthony Davis hammered them deep with his unstoppable arm. In this matchup backup quarterback Foley would have to face off against this aggressive foe.

Now the thing about Foley, or as many in the gaming world know him "Foghladha", is a psychological warfare fan. He gets in people's heads without them even knowing it, he plays shadow games, and he can literally throw a ball accurately without even looking directly at his receiver. He started the game off by telling his opponent that he would throw rock during the rock, paper, scissor match to decide who has ball and direction. This is a long running tradition of his and usually works well in his favor. The goal was to get the ball first and hopefully get direction second half, as the wind wasn't very favorable to the south side of the field. As Foley threw rock the other team's lack of trust lead them to throw scissor. Foley won and decided to take ball. The opponent oddly chose to go with the wind, giving Gaiscioch the wind at their back second half. Well at least that was the plan.

The first series Foley went under center for some quick plays that marched the ball down the field. Then Foley and Don ran their center sneak play, where Don snaps the ball to Foley and Foley gives the ball back to the center before popping up and faking a slant to his receiver. The Hoodrats bit and before they realized it Don was near the opposing endzone. A quick toss to Anthony Holloway and the first points were on the board.

The next series the Hoodrats would finally score their first points of the game. Foley didn't lighten up and took it to the house once more by hitting Josh on a fly route, putting them up 26 to 6. The final drive of the first half, the Hoodrats drove all the way to the 1 yard line. In the last play of the half, instead of just flipping the ball to the center for the touchdown, the Hoodrats QB decided to loft it up to the back corner to their tallest receiver. Little did they know Jamie Goodwick had some serious hops and picked the ball right out of the air, running it most of the way back before pitching to to Anthony Holloway for a touchdown placing the Gaiscioch up 32 to 6.

At this point the Hoodrats literally said "F*#% this, we're out" and walked off the field. They forfeited the game before it was even officially half time. The Gaiscioch were announced the victor of the C-League Championship and would enjoy the spoils of war in the form of a case of beer! Congratulations Gaiscioch for playing your hearts out against all that mother nature had to throw at you. Your perseverance paid off.

This victory was bittersweet for one Gaiscioch member, as Foley had not played quarterback in a championship game since his 1997 victory at Nike's Air-it-Out Football Tournament in San Francisco California. Oddly enough the other team in that championship forfeited too. After 20 years, Foley came out of retirement to lead his team to victory in what will be one of his fondest memories of all time. 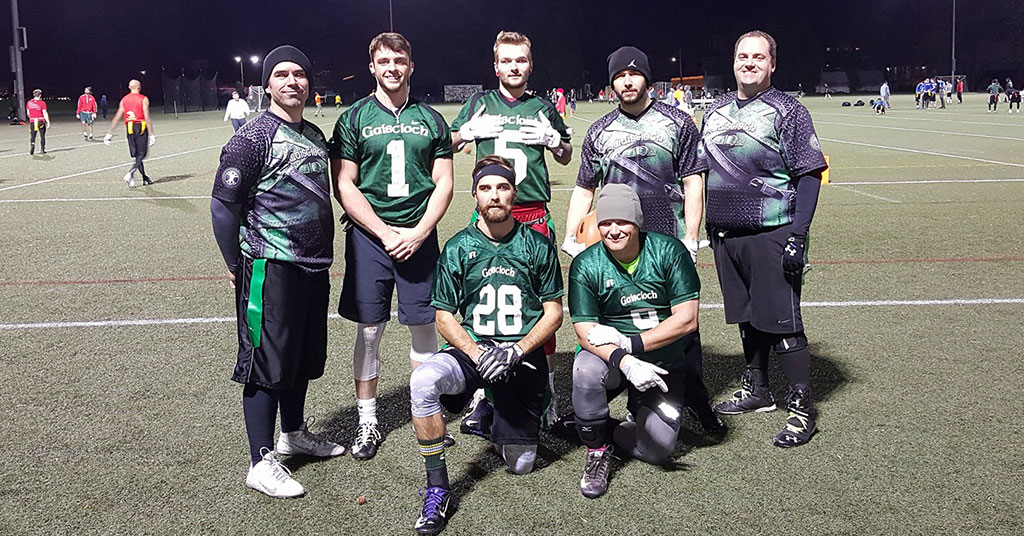