Elder Scrolls Online Summerset: A Land of Beauty and Adventure 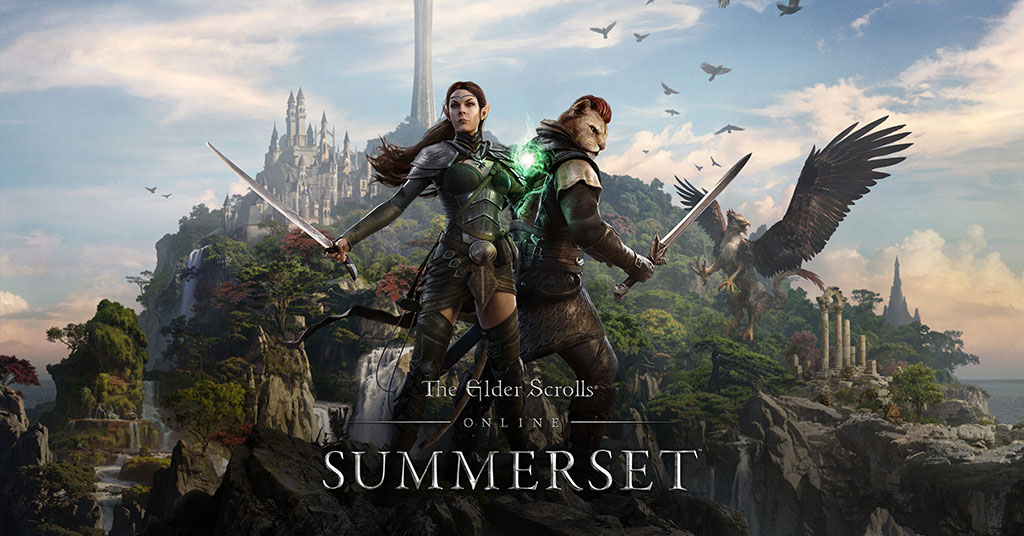 The Elder Scrolls Online: Summerset Expansion was officially released for PC on May 21st 2018, followed by the Console launch date on June 4th 2018.

Summerset is the second expansion for The Elder Scrolls Online, following Morrowind, which was released in June 2017. With this expansion, the land of the High Elves is put front and center. Its beautiful landscapes are a sight to be seen and are sure to please the eyes of both new and returning players.

Summerset residents might not have officially rejected the presence of outsiders in the past, but they also never took steps to encourage it. That is until Queen Ayrenn signed a decree, which was to officially welcome outsiders to come and establish themselves on the island. It is some time after the decree was signed, that we start the game. 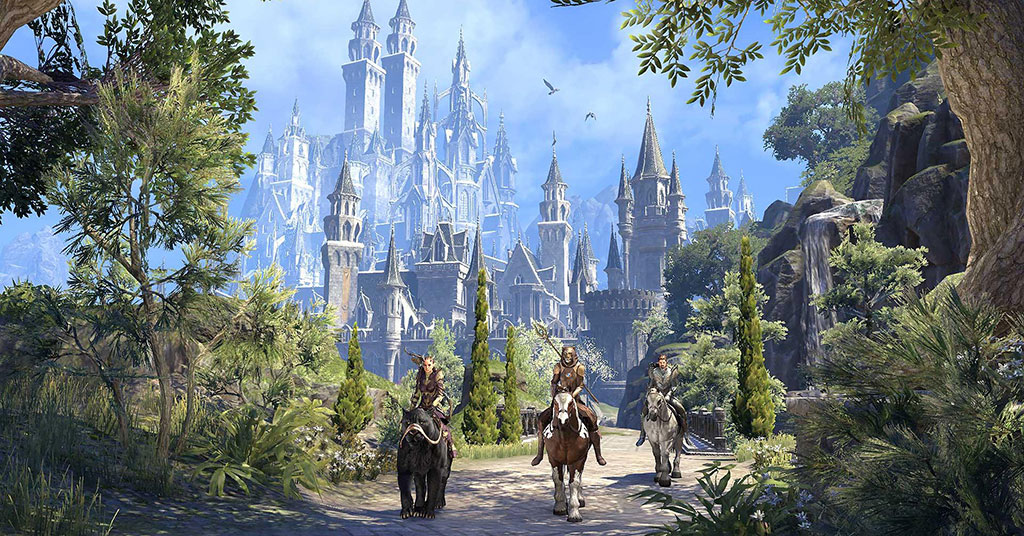 To introduce the new player to the game basics, Summerset comes with a new tutorial quest. The settings within, which the tutorial takes place, is both intriguing and “dreamy” looking. The quest allows for all the basics to be explained while moving along, leaving a new player with a minimum of knowledge and a sense of what is going on by the time they emerge on Summerset Isles.

I thoroughly enjoyed the main questline and I was delighted with the involvement of certain characters I had seen before, and just like when I am getting lost in books of which I enjoy the story, I found myself constantly wanting to see what was going to happen next in this storyline.

Like in the other zones, you will find a number of Quests Hubs from which most quests will originate. After that, a healthy dose of exploration will provide you with encounters of all sorts, some providing quests, some leading to unique achievements and rewards for you to unlock.

Daily Quests also become available to you after the completion of certain quests.

While, in my opinion, some quests would have benefited from being longer or more complex, I found most of them interesting and easy to get into. The same goes for the new guild questline, with which I had a lot of fun.

You will have access to a new Guild, coming with its own questline AND skill line, called the Psijic Order.

If I could make a suggestion to everyone reading this review, it would be to start working on the Psijic Order Quest Line as soon as possible while playing through the Expansion content, since unlocking the skill line offers actives, abilities and passive bonuses, which I believe many players will come to appreciate. 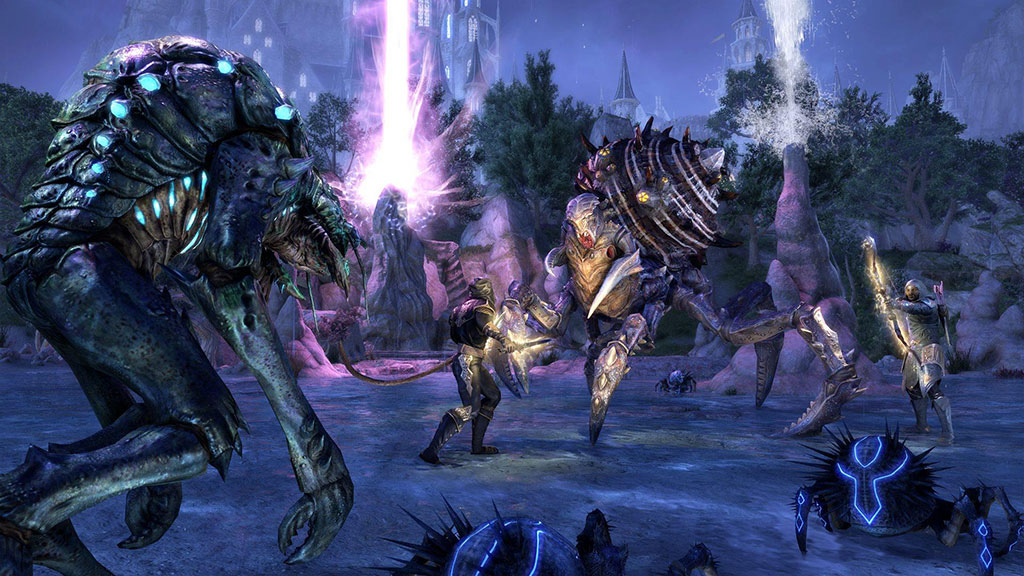 Six of these can be found in the region of the Summerset Isles and they sport the same icon on the map, as regular Dolmens. Unlike their dolmen counterpart though, these geysers emanate from the ground (like their name suggests) and bring new mobs for you to defeat. After the waves of mobs have been eliminated and the named boss has been defeated, a giant shell trove will appear containing your precious loot.

I personally enjoy shutting down those Geysers, mainly because of how different they are from the regular Dolmen. The visuals are distinctively different and the area within which mobs spawn appears more open and the mechanics of some of those monsters can definitely take you by surprise.

As of the release date, Battlegrounds are no longer limited to players who own the Morrowind Expansion, instead becoming available to anyone with the base game.

With a new zone, comes a number of new delves for the players to explore, as well as two new public dungeons. Like in the previously explored areas, the two public dungeons: Karnwasten and Sunhold, feature their own quests, skyshard, group boss and dungeon bosses for players to conquer. For me, I must admit Sunhold struck me as the most beautiful dungeon to date within the Elder Scrolls Online world.

The players will also have the chance to form groups of twelve to test their skills and reap new rewards, in the Summerset Trial: Cloudrest. Players can complete the “Normal” and “Veteran” versions of the Trial and expect drops such as: Aegis of Galanwe, Arms of Relequen, Mantle of Sironia and Vestment of Olorime.

Six new world bosses are found on these lands, bringing with them new mechanics for the players to master.

It’s hard for me to know if you have been around the world of Elder Scrolls Online for a long time or not, but I can tell you that the players are delighted to finally have Jewelry Crafting integrated into the game.

Granted, the materials may not always be easy to find and the research for traits can end up taking a long time, but for those who enjoy crafting, it is all worth it. So do not forget to put skill points toward this new craft and let the fun begin!

If crafting has never been your “thing” to start with, you can rest assured that finding a player-crafter who can create the piece you are looking for should not be very hard, especially once the expansion has been out a few months.

The expansion comes with three new craftable sets: Adept Rider, Nocturnal’s Favor and Sload’s Semblance, as well as two new crafting motifs: Psijic and Sapiarch. And for those who enjoy all the different homes and housing options across Tamriel, you can rejoice as there are three new player houses, all of which can be purchased with in game gold or with crowns, furnished or unfurnished.

The sheer amount of content and new features made available to you in this expansion definitely makes it a worthy buy in my book.

For the current or returning player, I believe it to be a welcome addition to an already very extensive world.

For the new player, it allows you to enjoy the game directly starting with Summerset, without feeling like you are missing necessary information by not having played One Tamriel and/or Morrowind yet.

The active content is entertaining and involved. The zone itself is beautiful and dreamy. The new craft, sets and skill line are worth considering and investing toward, for your characters builds.

And so, some Altmers might not say this to you, but I will: Welcome to Summerset, friend! 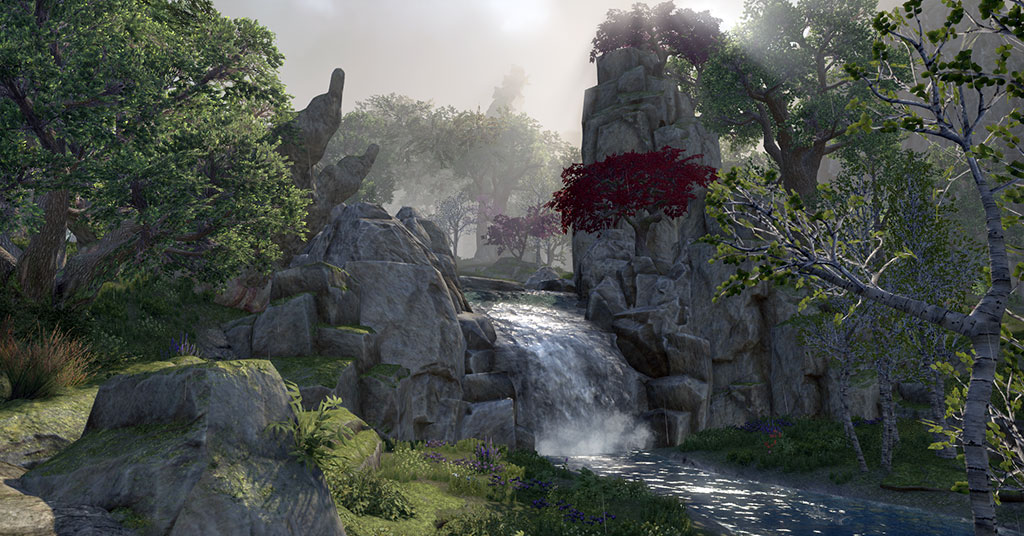