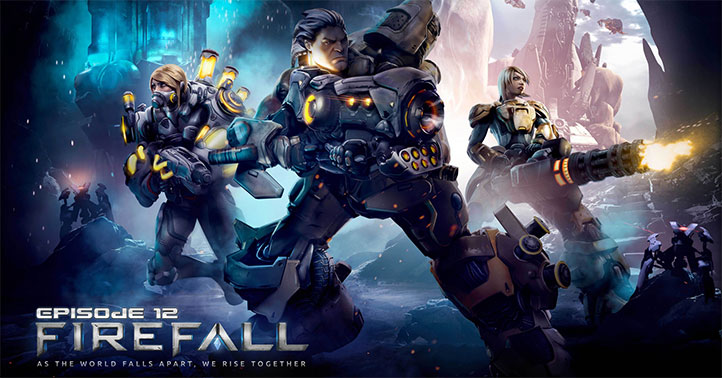 This week, fighting for a world forever changed by the Melding, the Stream Team will customize their battleframes and weaponry, taking the fight to the Chosen to reclaim Earth!

Many moons ago, a Gaiscioch member by the name Spartan, tried to suggest I give this one a try. A 3rd Person shooter MMORPG wasn't exactly on my list, however for the Streams of Epic Adventure we try to take our viewers to all kinds of interesting destinations. Some glorious, some not so glorious. All in the sense of adventure.

Firefall is an interesting concept much in the vein of Planetside 2 or Defiance. It had some nice features and the vocal quests were definitely better than spending all my time reading rather than shooting.

Soren, Smitty and I had a few early hangups, like trying to get on the same map, having quests not sync up, and wandering into an area we obviously weren't supposed to be in. Overall the experience was enjoyable to some extent. If a friend asked me to come play with them I likely would but it's not a game i'd drop everything to play.

It's high points were the action combat, ease of use, and clean interface. I liked the ability to jump into a variety of vehicles from motorcycles to gliders. The vehicle controls were pretty smooth and it was easy to pick up.  If you're looking for a sci-fi shooter I'd recommend this one. Theres a lot to explore and a large variety of different situations to find yourselves in.

This week the team decided to hop into Firefall. For those that don’t know, Firefall is set up to be a team-based action shooter. The mission: Fight and kill the army of Chosen and stop the melding in its tracks. From the very first cutscene I was instantly reminded of Starship Troopers. Sounds pretty cool right?

Character creation if fairly basic, with most cosmetic and customizable options coming from the shop in game. good news here is that you can convert resources to the games currency thus no need to spend real life cash. One thing to note is that you can’t make alts. The game only allows for 1 character per account so if you decide you don’t like something and reroll your toon you can’t go back to your original.

Questing comes in the form of missions and to be honest they weren't all that stellar. The generic fetch quests rule the starting levels and most of the action around them is a mindless bore… so if you aren’t a fan of questing to begin with Firefalls newbie zone is going to be a slog fest. Even with a group we struggled to find anything really meaningful to do. Missions were a pain and there were a couple of times where at least 1 of our group had phasing issues and didn’t get in the right map, mission credit, or ended up doing the same mission but the objective order had switched. Missions are also spaced really far apart and I felt that we spent more time running places than actually doing much to progress our characters . There is a small ray of light that consists of Thumper repairs and Meld Tornadoes (dimensional rifts that can take you anywhere) which drop as an open world event but even those are spread far and few between. Granted we were only playing the starter area so it is possible that missions open up in the higher levels.

One cool addition to the open world events Firefall does well is the ability for players to create their own dynamic events with a personal Thumper. Thumpers are a nifty piece of gear that pummels materials out of the earth that players need for improving their Frame’s and gear. When a Thumper has been engaged they player and anyone else for that matter, will need to defend it from a host of bugs. And jet packs. Can’t forget the jet pack. Brought back so many memories of playing Tribes.

Creatures aren’t to much of a hassle. Thier AI is pretty basic and most of the time the player just has to let loose a stream of ammo to kill them. As tacticaless as it is to fight in the first few hours of play it still put a smile on my face when I mowed down a tonne of bugs and then rushed in and melee the remainder. Something about all the carnage is soothing.

All in all Firefall was in a much less polished state than I would have expected for a game that has been out as long as it has been. The phasing and quest issues in group play are a pain but I found the solo play to be mostly enjoyable even if repetitive. As you play though you’ll note that the Dev’s had lots of interesting and good ideas starting to take shape. Hopefully in further game updates we’ll be able to see those ideas come to fruition. Is this a game I’d hop back into? Probably not. Just wasn’t my cup of tea but I would still encourage anyone who is a fan of action shooters or the sci-fi genre to take a look.