Adds are mobs that are added by someone you’re fighting, usually a minor or major boss. They usually need to be controlled, and often the party leader will target these adds in a specific order. Dungeon guides should give a general idea which adds are the most damaging to allow your party to choose whether to ignore the adds, (hoping that AOE will kill them) or fight them instead of the boss, (hoping the boss doesn’t kill you while you’re trying to get rid of the adds) or some combination of the two.

Aggravate a mob, causing it to attack your party. 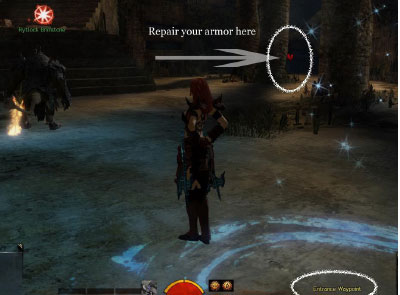 Every dungeon has a place where you can repair your armor. It costs as much as it does outside the dungeon. Look for an anvil with a heart over it. Bear in mind that explore mode repair stations are not always in the same location as story mode repair stations. It is important to note the nearest waypoint so you can travel back as needed.

A single character with a range weapon attempts to hit and cause specific mobs to follow. That character then brings that/those mobs to the rest of the group. Used very often in conjunction with stacking.

Upon your death as long as everyone in the party has left combat or died, you can “respawn” at any open waypoint in the dungeon. Bear in mind, some situations, if everyone respawns, can cause a boss to heal completely and his adds to stay active, making the fight even more difficult the second time around.

Move through an area without stopping to fight or “smell the roses.” It is best to use speed buffs and stability skills as necessary to make it all the way through.

Everyone stands on the exact same spot in the game. This can happen in PvE, WvW, Dungeons, or anywhere a group of characters needs to work together to defeat a common enemy. This technique may render the present screen angle useless. The mouse can be used to adjust the view to an overhead, which will allow more useful information to be seen.

2. Skills that push or pull your foes - use sparingly.

3. It is not always helpful to resurrect someone in mid fight. It truly depends on the situation.

a. If a player is just down but not defeated the first choice should be for that player to target a lower level mob. If that mob is killed before the player becomes defeated, that mob’s death will cause a rally.

b. Second choice is to try using resurrect skills, such as the warrior’s Battle Standard, or Guardian’s Signet of Mercy.

c. If it is possible, have one or two players kite the mobs or boss while the rest try to resurrect.

d. If none of these are possible, explore the possibility of getting everyone out of battle so the defeated players can respawn.