Dropzone: Bring a Friend to the Party 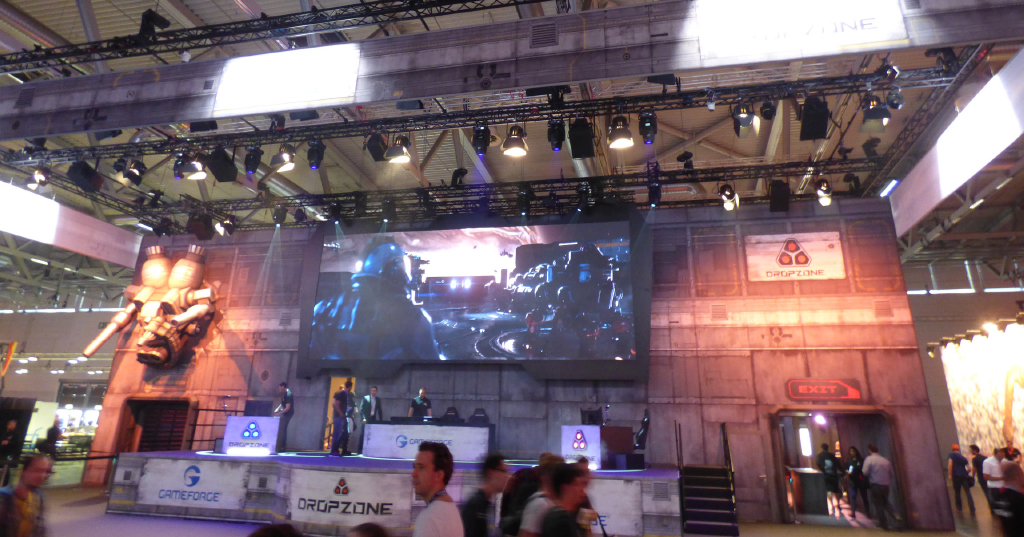 Recently we strapped in and experienced SparkyPants studios attempt to drag the Real Time Strategy genre into a modern age, dominated by Multiplayer Online Battle Arenas. The ESL Clash in Cologne was just the start of a media assault. At Gamescom 2016, Dropzone made a definite impression on the show.

The Dropzone booth was a hub of activity throughout the weekend, generating sizeable crowds as gamers queued up to try the game or watch streamers battle on the Dropzone stage. I had the chance to sneak into the Dropzone booth early in the weekend and talk to Stuart Jeff, lead designer at Sparkypants Studios, about Gamescom’s reaction to Dropzone.

Sparkypants has made huge strides already and it is clear that, after the ESL Clash in Cologne, Dropzone will soon have a very healthy competitive scene. Already present are a slew of camera tools, the option to browse and watch games, as well as a customised versions of the game for broadcasters. However, I returned to Dropzone to see something a little bit different. Gamescom 2016 marked the arrival of a new game mode and Stuart took some time to steer a me through Dropzone’s 2v2 encounters. Designed as a complementary mode to the 1v1 experience, it allows players to team up with friends and experience the same game in an exciting new format.

There is one certainty with 2v2 games, carnage. Utter and complete anarchy, followed by a lot of explosions. 2v2 follows the same basic principles as 1v1 gameplay. Mechanoids are deposited into the very same battle arenas, alien infestations still need culling, and the same objective based gameplay is present.

Familiar rules should help ease players into a game mode that adds an additional layer of complexity. During my hands on, I just about managed to competently fumble my way through 2v2 games using fairly typical damage, control, and healer team composition. Play tends to find inexperienced players acting independently, only coming together to smash one set of mechanoids into another, or to engage each other at the centre of the map. However, the new game mode does have potential for organised players to assume specific roles and engage in useful map rotation. Much like 1v1 play, when two teams meet things get ugly fast. Hectic clashes over the map’s central objective are frequent and unavoidable, quickly becoming cluttered with mechanoid carcasses, explosions, particle effects, and skill spam.

With these encounters occasionally descending into a disorganised rabble, Sparkypants are introducing 2v2 as a way to play for fun, rather than ranks. Balancing pilots, mechanoids, and their respective load outs for 1v1 competition is still incomplete, and it is a difficult enough proposition without having to rework for a new game type. Despite these difficulties, 2v2 mode introduces the excitement and unpredictable nature of team based combat to Dropzone. Games are incredibly fun and allow players to have shared experiences, based on partnerships rather than rivalries.

This mode also hints at the possibility that Dropzone might see enhanced social systems, and clans as players continue to create lasting alliances. While Sparkypants are reluctant to say anything concrete on these possibilities, a new game mode during beta testing is an exciting indicator of what the team behind Dropzone are already capable of.

In essence, Dropzone’s 2v2 play takes everything you already know about Dropzone and throws in the most unstable element possible, more people. It is fun, frustrating, and has real potential. It is a step in the right direction and when we discussed it with players, it left them hungry for more. If you could not make it to PAX or Gamescom then find out more about Dropzone at www.playdropzone.com.