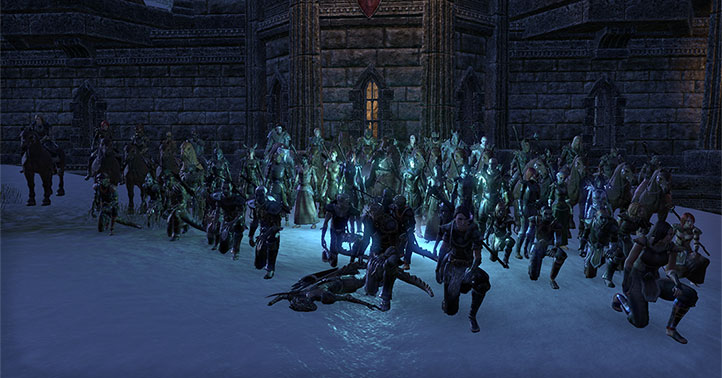 I am going to depart a bit from the photo rich articles of previous issues and talk about something many commanders ignore, or fail to consider.  This has led to more defeats throughout history than any other, at least that I can recall.

You have to know your team’s limitations!

As a field commander you always want to have the best trained, best equipped, and most knowledgeable team on the battlefield.  You want this because it helps you to win the close ones. If you forget to consider this one little thing it will defeat you before you can even get started. It will take you by surprise and leave you wondering what just happened.

Does that mean you only want to run with only level 80 or  VR12 players?  No, certainly not!  You should be able to run with players of any skill level.  But they should know their characters and how to play them, and know how to react to different situations.

What do I mean?  Let’s examine some possible situations.

You are commanding in Guild Wars 2.  You have a team of 10-15 with you.  You have been experiencing great success taking camps and towers, and begin to feel a bit cocky.  You all know the feeling.  Hey we can take the whole battlefield.  You become so focused on this that you fail to notice the outmanned flag just turned on your skill bar.

You approach the Hills keep from the south and see that the walls and gate are still “paper” or wood.  Ah, we can do this!  You set up siege and take the gate down quickly.  As you are heading up the ramp to the inner gate you see a few of your opponents run into the inner keep. Ah no problem we have this.  You set up flame rams on the inner door and begin to take the door down.

Things are going great, it’s almost down and then it happens... the dreaded wipe. The zerg just ran over you and you never had a chance.

Could you have avoided this, absolutely!  But how you ask, how can I avoid being run over by a zerg?  There are several ways.

You are commanding a squad of approximately 24.  Many of your team are still new to AvA, you have a small number of veteran players with you. One VR12 and a sprinkling of other VR’s.

Your objective is to take Sejanus outpost.  You decide to take down the front gate.  So, you instruct your team to take down the guards in the front and have a team member place a ram.  Everything is going great the door comes down in a few minutes and you decide to rush the front flag.  Not a bad tactic since you have a good sized squad.  Things are going well you are all around the flag when it happens... Wiped!  As you are laying there you see the Emperor from AD standing there all by himself smiling.

How could this happen?  Been there, done that!  It does happen and for a couple of reasons.

So how do you avoid this when taking resources and outposts with your team?

Will these suggestions make every assault or defense you command successful?  Of course not, but it will keep you from killing your team though inattention, or neglect.  If they beat you and you have done all you could do to prevent it….Keep your head held high!  You were simply outplayed on that occasion.  You will get them next time.

Oh and for your information…. A group of former emperor’s and current emperor can wipe just like everyone else.  We have done it!  If they get sloppy and inattentive, they die!  Additionally as more and more players reach the higher veteran ranks their domination is become less apparent!

So by planning ahead and using all of your resources you can win the close battles. You will even be able to win many of the not so close battles though knowledge and planning.

See you on the battlefield