Of all the teams I meet at the convention circuit, Coatsink are one of the busiest. They had a hand in at least six titles at this year’s E3 conference and managed to squeeze in two new games at EGX Rezzed 2017. Unfortunately they weren’t willing to share the secret to their rather prolific success. Instead, they plunged me into a world of mystery and danger, in their new adventure, Augmented Empire.

That was the best #GDC ever. No less than 6 titles on the expo floor that @Coatsink had (at the very least) a hand in. Almost feel legit?!

Set to release during summer 2017 on Gear VR, Augmented Empire is a new direction for Coatsink. Despite being one of the most experienced VR teams in the industry, the scope of previous games has, until now, been constrained. That is all about to change. Augmented Empire is a VR RPG that manages to blend a sprawling narrative with reactive combat systems, turn based strategy, fantastic art direction, and a little mystery. While my tour of New Savannah was brief, I managed to grab some time with one of the team to talk to them about Coatsink’s new narrative. 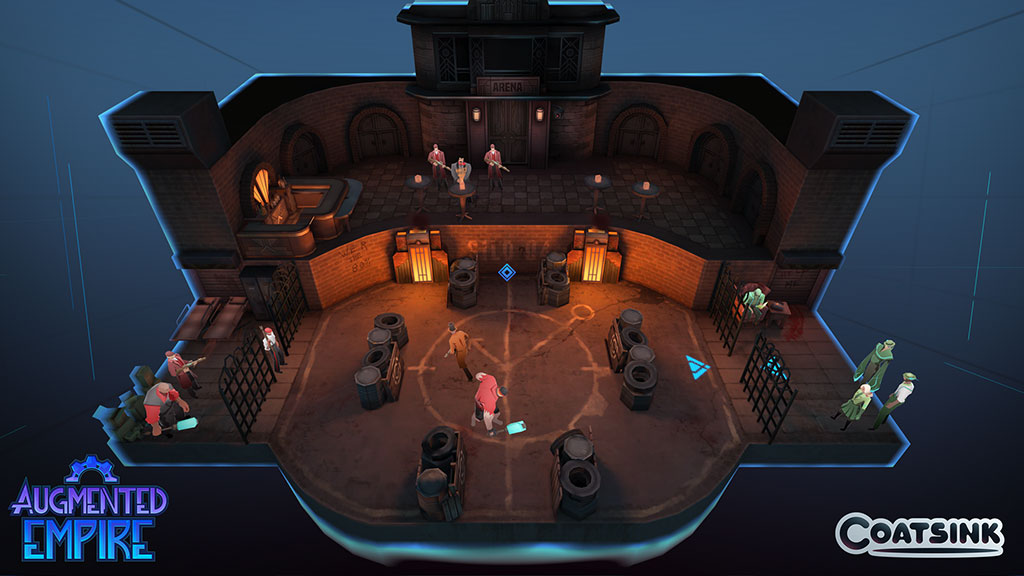 Can you introduce yourself for our audience?

Sure, my name is Jon Davies. I’m the narrative director at Coatsink.

What are you showing here today at EGX Rezzed?

We’re here at EGX Rezzed to talk about Augmented Empire, which is a cyberpunk, story driven, turn-based, role-playing game for Gear VR, coming out in summertime 2017.

That’s a whole lot of genres?

Yes, yes it is. You could probably narrow that down to cyberpunk RPG.

How long have you been working on Augmented Empire at Coatsink?

Personally, I’d say ten months. Since last July. I was brought on board specifically for narrative design, just after the prototype was put together. On my first day they were like, take whatever concepts you like from this prototype, so long as it's remains a cyberpunk gangster game and it combines this first person perspective of being sat in a chair, in front of a hologram of the city, that is brought to you in augmented reality. 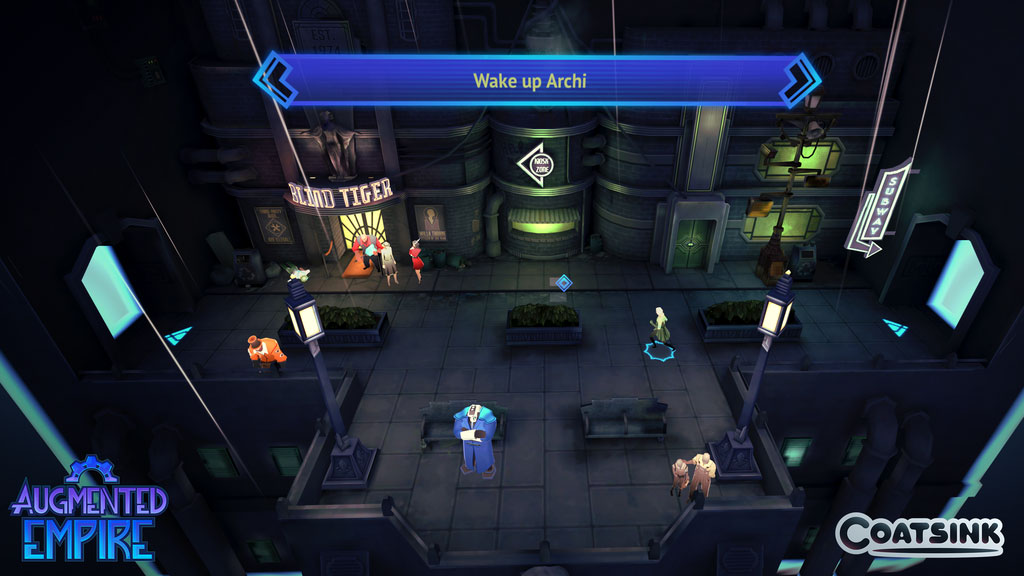 Throughout the game, we follow the adventure of one character in particular. Tell us about our main protagonist?

Sure, we are talking about Craven, who is the character that you inhabit in VR. Little is known about him or her at the start of the game. We've kept the gender neutral there and they're only ever referred to as Craven by the other characters in game and your robot sidekick. He or she is a criminal mastermind looking to liberate New Savannah from an oppressive, controlling elite.

That controlling elite seems central to the game. How is that presented in game?

So the game is set on an island called New Savannah, which is in the name of the, but the city is divided into three tiers. At the bottom is where a large portion of the population lives, largely in poverty, scavenging power supplies to survive. If you are deemed worthy by the citizen grade system, which is a kind of zero to ten of civil obedience, then you live in an area about a Kilometer above. This area’s a lot more affluent, but fewer people live there. Then, at the very top, if you're a grade ten in this system, and deemed worthy by society, then you live in Celestia, which is just absolute luxury. 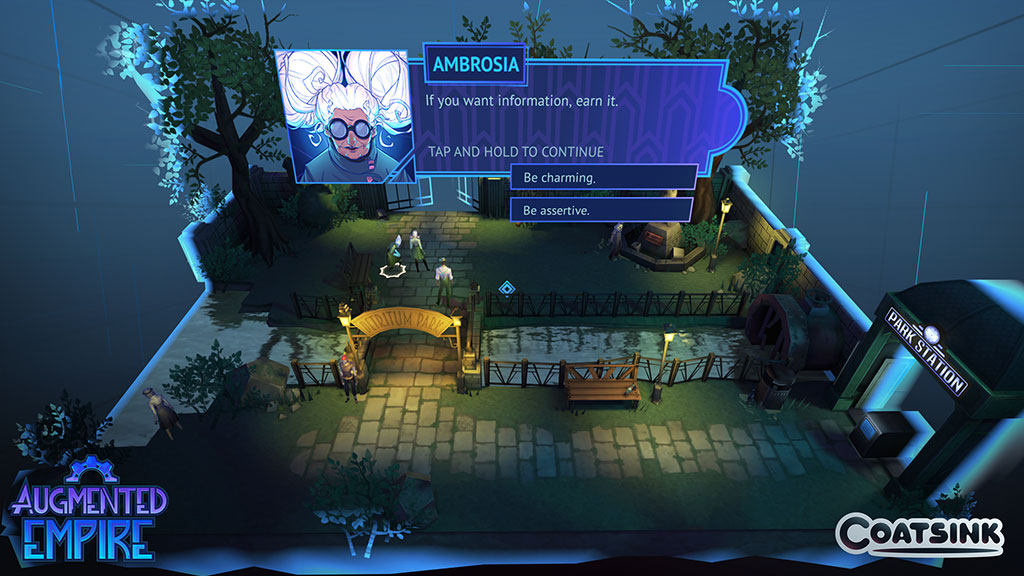 How much of Celestia do we get to see throughout the game?

The game is spread across all three tiers but it is not a case of starting at the bottom and working away to the top. Especially towards the end of the game, we kind of go up and down quite a little bit. I'm not going to explain too much about the how's and why’s as I’d like to leave a lot of the story secrets for when you play the game.

And how much content is there in the game?

We're looking at upwards of eight hours. Hopefully between eight and ten of, obviously depending on play styles. There's a lot of character progression, not just in terms of the narrative but the end of every mission. For instance, if you have the appropriate tools you can upgrade your characters, there's different abilities to select, character buffs and some traditional RPG elements.

A lot of the narrative seems to be communicated using on screen text, was this a narrative decision or a technical constraint?

I gave it a talk recently on story telling in VR and there's a reason that dialogue can be difficult. I come from a screen writing background and it's cool to tell the story through environments, especially at the start of the game. You can go through a few environments that explain how the city came to be, how New Savannah emerged. There’s quite a bit of environmental story telling in there. The reason that the game tends more towards written dialogue is that the characters are quite small. You can’t explain an important plot point with a steely look, for instance. It just doesn't translate from a distance. I could give an example, early on in the game a character leaps out in front of someone else to prevent them getting shot. Early on that didn't have any dialogue and it was quite unclear what was going on just due to this distance and the high angle third person viewpoint for that portion of the game. So, instead of having nothing said it's a bit more of ‘Don’t shoot!’. If there appears to be a fair amount of dialogue, then that’s the reason why.

How steep was the learning curve when learning how to write for this sort of format, and what was the biggest challenge creating a story for VR?

The narrative that you play through, I found, was a very similar process to a non VR video game. It’s kind of iterating on a summary, just making sure that the story was locked down in the same way that I would do for any non interactive story. I suppose the biggest challenge is the character we inhabit called Craven whose motivations are not explicitly stated at the start of the game. Rather than just have a nebulous aspect of what are you actually are up to, it's the main portion of the player character’s story arc. So, you start off in an unclear position, not really knowing what your motivations are, and it takes the entire story to uncover what they are by the time you get to the end. We've got a couple of different endings depending on how you behave and how you interact with other characters. 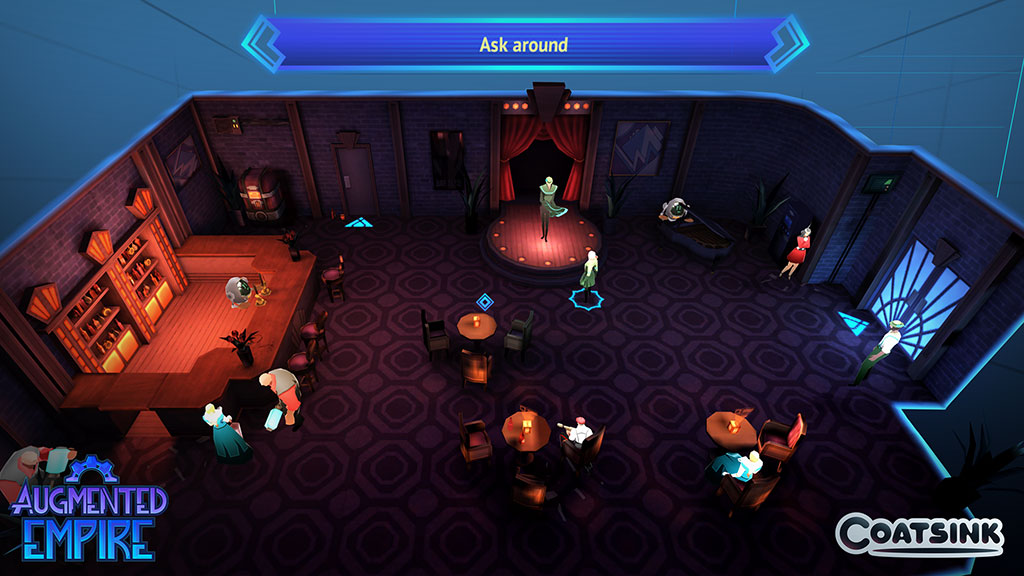 This game is coming out on Gear VR, did that introduce any technical limitation, and did you have to be quite disciplined in your approach to creating Augmented Empire because of any platform constraints?

Personally no. The word no was not something I heard a great deal during this project. There’s obviously certain limitation when it comes to art, to a degree. We can’t, for instance, render a detailed version of the room in first person as well as all these crazy new Savannah environments at the same time. If you play the demo, you’ll notice the room drops out as the augmented reality kicks in. Besides that, I think no.

The team have done a fantastic job with the art, and you wouldn’t think there were any limitations with the system. SO many people have commented over the last few days that it looks really cool then say ‘oh wait, that’s VR. That looks amazing‘. It’s fantastic.

Is it likely that Craven’s story will continue after we complete this game?

I would like to hope so. We're just looking to the summer of the moment and the main release of the game. I was told, once upon a time, I'm always just be thinking about where the future of the story could go, but I have a philosophy when it comes to story telling and that’s just make sure that the first one, that you tell, feels so completely resolved by the end that people want to see it continue. If you have a question mark hanging over the ending then it's a bit less satisfying. You want to know what happens to these characters in this environment before you start to think about the next one.

How much replayability is there in this title?

So there's this interactive narrative element to it. One of the characters in particular, you choose how you interact with throughout the game and your ability to not just be kind of honest but your ability to vary that when it's called for is what ultimately determines the end of the story. There's a couple of different endings in there that vary in subtle degrees, not least concerning the ultimate motivations of the character you inhabit. I definitely think once you get to the end, hopefully you want to just go back to beginning and play it through differently.

Where can we find out more about Augmented Empire?

Just head over to the website at www.coatsink.com to find out more about the game. Hopefully we will have loads more information coming soon. 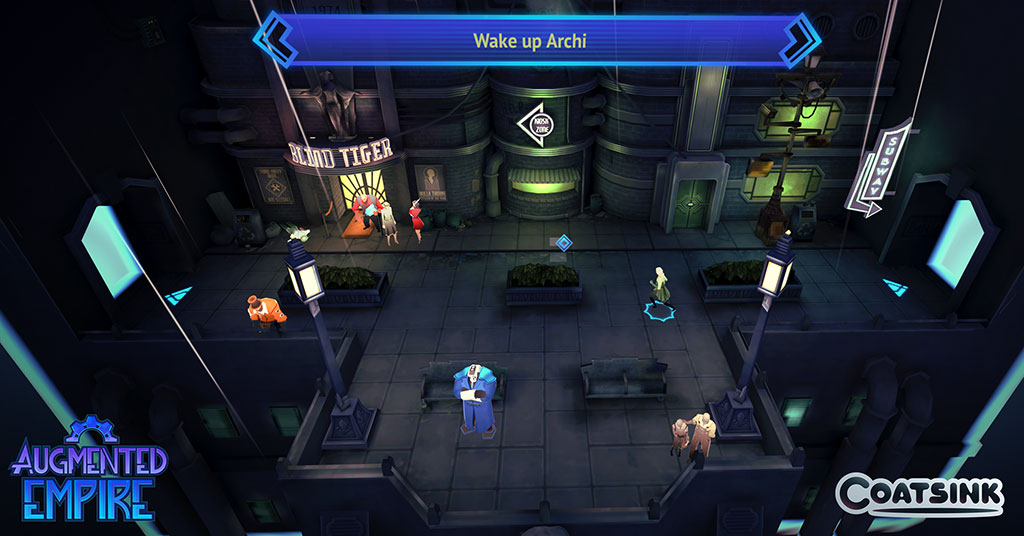