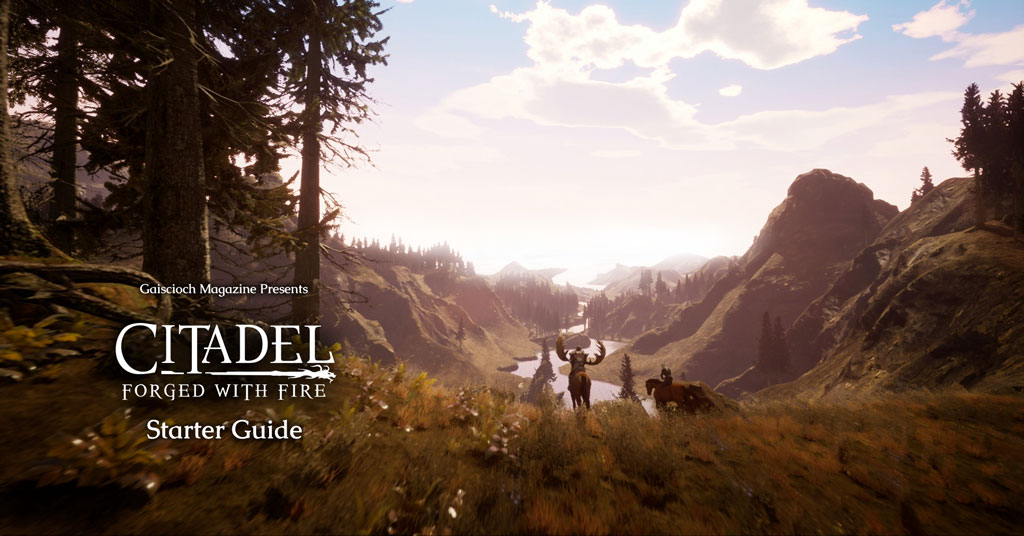 Dropping at the end of the month (July 2018), the new patch is open for testing by any owner of the game. Here’s what any aspiring wizard needs to know to get started and be successful with the new systems as they stand! Exact tuning and all information may change, as this is a test build, but a lot of this should help get people prepared to face the dangers of the renewed Ignus.

The UI. The new UI has horizontal buttons for most tabs, but the easiest way to get around is still hotkeys.  Learning those hotkeys may take a little effort, but there are guideposts in each major town. Here’s a quick rundown of the defaults for anyone in need:  I for inventory, K for knowledge, O for basic crafting, P for spellcrafting. You will notice some other changes if you have played before, but it’s really mostly layout. Multiple crafting now uses a +/- button setup.

The very first thing you will want to do is reach level 2. The fastest way to do that is to gather everything in sight. You’ll want it later anyway. If there’s too much competition for resources gather in the nearby woods. The reason is that at level 2 you open up the new tutorial quests, which will help you get some basic supplies together for your new life on Ignus.

Even better, since all the quests can reference materials you already have for material requirements your gathering efforts will help you meet those needs. You will also get some basic starter gear, which means you can spend your first few levels worth of knowledge points on something else.

Handing in a few basic materials gives the first weapon for a mage, which leads us into a brand new topic.

Spellcrafting is something new with this update. There are many resources in Ignus which have some effect upon spells in spellcrafting. This is in addition to the weapon type and the spell target selection (single, multiple, yourself, and utility/world spells.)

Here’s how it works. You start by having the weapon you wish to create a spell for selected.  You can select up to 6 items to change the basic spell in some way. You select which of the two spots on your weapon (left or right click) you want the spell to go on and then you just make it.

Essences are the first material to know about. Essences change the elemental nature of a spell.  There are currently 6 essences: nature, frost, fire, dark, light, and storm. Each one can be found on various related creatures or at specific places around Ignus. Dragging one essence to the central part of the spell creation area will select it, changing the resulting spell that will be made. What will each make? That’s for everyone to learn via experimentation… but as one example using a nature essence with a melee weapon AOE spell will make an acid geyser that does a knockback on things that pass over it (somewhat random direction, as tick timers on the effect are not 100% instantaneous.) 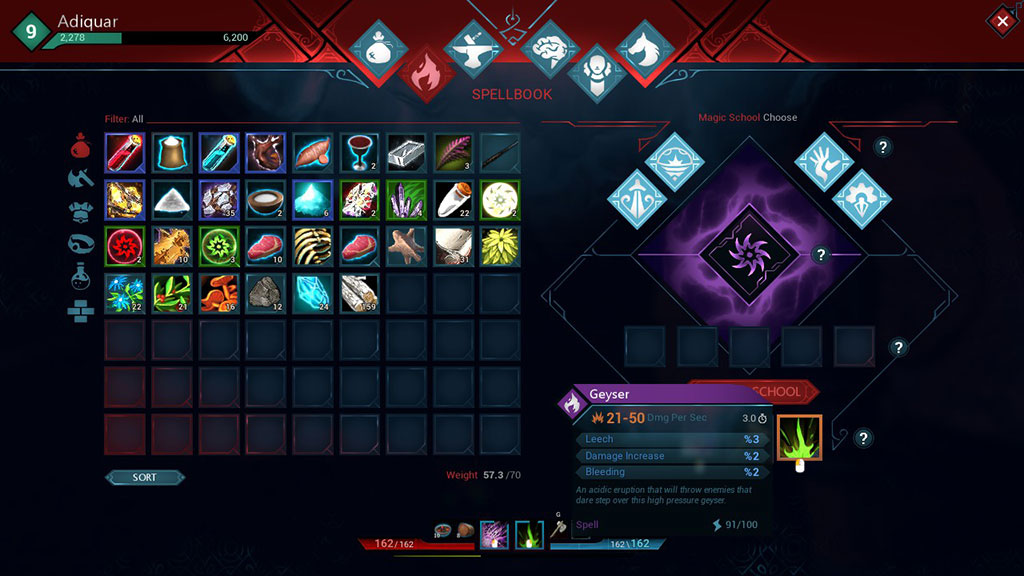 Then there are the raw materials around Ignus. Many of these will add special effects to spells in various amounts. The more potent the material the greater the effect. You can even craft potions to maximize those effects (replacing the siege potions). The effects available are siege (for PvP structure damage still), bleed (bleed damage over time effect), leech (you gain health from the damage), damage (more power!), range (more distance before dying out), and energy.  Energy ties to a new concept with this system, spell durability. You will have to re-make spells every so often as most of them have a set amount of energy and some of that is drained with every cast. Obviously some effects will be better for a given situation.

You can craft a basic version of spells without anything added, so never fear that you will run out of basic spells. However, if you follow the tutorial quests you will notice that nature essences are required for gathering with magic instead of manually. Where essences do drop from creatures you will likely want to know where to go to get a few of these when you need, especially if you have a big building project you wish to work on.

Spellcasting still takes mana, so how do you get it back before you can make potions? You can return to a pool in the starting towns, or you can find a natural mana pool. Those might be far away though, so cooking would be your answer.

Cooking is another new system, and it isn’t just about you. It also involves your tamed creatures. Cooking is how you will extend their loyalty timers now. Some raw materials have a little effect on that, but cooking is where the big returns are.

When you begin you will have very limited healing and mana options. That should be your first priority to take care of, and the tutorials have you covered for your first batch of supplies. You will get some items together to make a berry salad and to cook some meat. 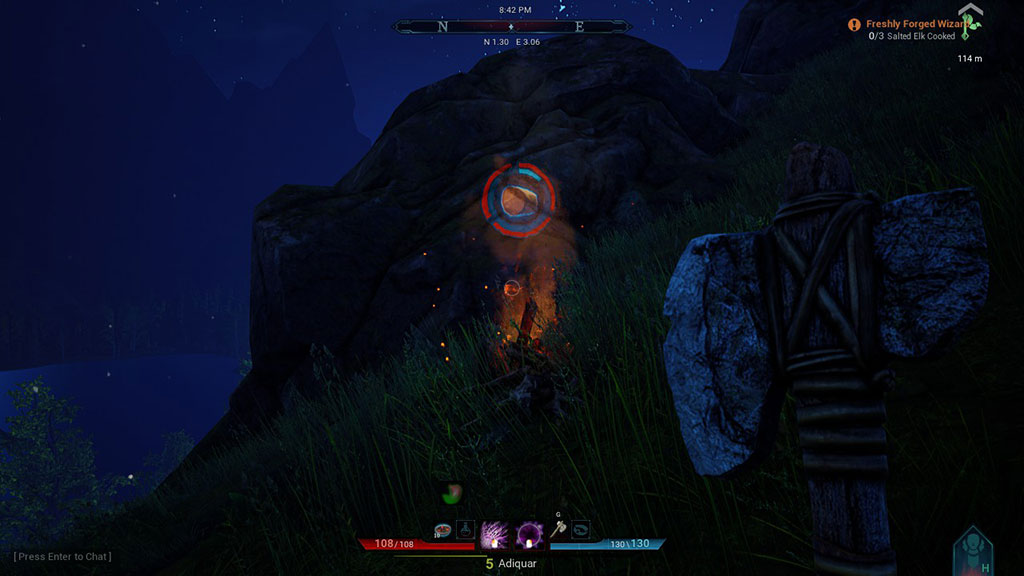 The berry salad is pretty poor at restoring you, but it is easy to make. Use it for emergency healing as needed because it only does a little health and mana right away. On the other hand there are more advanced foods such as the meat you are going to cook. Those can have some special effects.

Early on those effects will be limited to satisfied and sugar rush. Again, there is no explanation of what those do in game, but I’ll give you the basics. Satisfied is the basic food buff. It gives health and mana regeneration at a low rate. That regeneration lasts a while and is in addition to the basic food restoration. Sugar rush combines that regeneration with a speed buff for long distance travel. It is best used for long foot journeys or to escape danger.

Did you notice that the fire for cooking meat took more materials than you thought it would? At least for now the requirements for building anything are much higher. Whether that makes the final cut is something being discussed on the Citadel FWF discord. Just be prepared if you see higher building costs than before. On the other hand, materials also tend to weigh less.

So how do you get the ingredients to make more advanced food? That will require a little more work, and eventually the help of some other new tools. To start, though, milk can be obtained from milk-bearing animals. Elk and direwolves in particular seem good choices, although elk are more reliable. Plants can be obtained through gathering in the woods, crafting, and looting chests at enemy camps and caverns. Wheat seeds can be made from yellow pine seeds once you can build a deconstructor, and farming unlocks at level 20. Salt can be gathered near the ocean off large salt crystal rocks.

Farming is yet another new system. It unlocks at level 20, along with the sprinklers to automate taking care of your farm plots. A farm plot is able to grow 6 seeds worth of plants and a sprinkler can water 8 plots, which means that a single sprinkler can take care of 48 growing plants. Getting seeds for the plants requires the deconstructor.

Getting the farm started needs metal, and you aren’t getting it from the red rocks anymore? Of course, how silly of me! That’s yet another new change. Iron and gold ore nodes now exist. You can get iron from gold nodes and gold from iron nodes, but it is rare. Precious stones are now the entire reason to go gathering off the red rocks of old, and the other resources appear in different locations.

You can find iron and gold ores near water. Any water for iron, but gold is usually near rivers that are heading toward a larger body of water. Each has a specific style to it. You can see the shine on iron ore, and the blatantly obvious color of gold in gold ore. 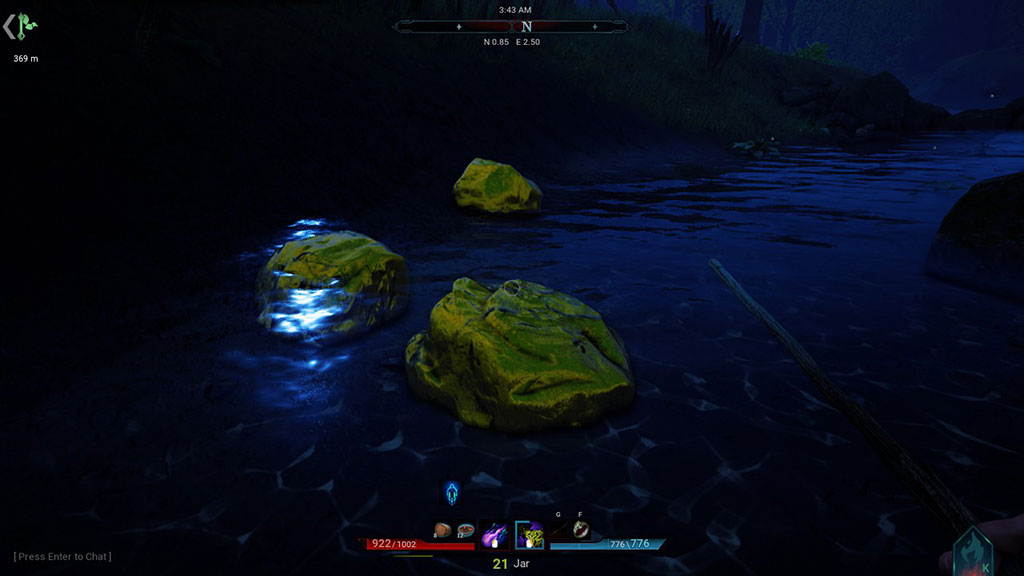 Getting started with the tutorial I mentioned that items you already have can be used to complete quests. That remains true with daily quests that unlock at level 10. When visiting a quest giver having some wood and stone on you can ensure you do not need a return trip.

Quests are valuable for the items. The xp is not so great, so do them with other tasks you already want to do.

Getting a piece of magical jewelry early on is important, so get a forge and a crafter in your wizarding house ASAP! You can find jewelry too, but the odds are low.

The first pants item you can unlock is the social broomstick league pants. Having the extra item may be worth it fairly early on if you have a group to play with, otherwise you may want to save the knowledge points.

Some effects are useless with some spells. For example, extraction is the general gathering utility spell. It cannot target creatures or structures. Thus siege, leech, and bleed effects are worthless for the spell. Energy and range work fine though, allowing either harvesting from a greater distance (useful if your desired resource is guarded by fierce foes) or for a longer time before crafting the spell again. Damage also works allowing slightly faster harvesting.

Many items can be harvested in melee. Trees can be chopped and essences gathered. Creatures can be hit if you can get close enough. Early on you may need just a little more XP to level and be low on mana. Melee with ‘V’ by default might get you through that!

As resources are spread out farther and in general less common than before it is important to have either good relations for trading or a plan for travel. Running out of salt camped in the middle of Ignus will mean you have no ability to cook salted meats. Which means a long potential run if you don’t have a plan.

Experiment with spell crafting and weapons. As a special spoiler, melee weapons have a speed buff spell with no essence and self as the target. It does not have limited energy, but does cost a fair bit of mana. It also stacks with sugar rush. Using it for long distance travel can be a big time saver early on.If you are curious about the update, you can look at it live if you own the game. You can also visit the website for the game at http://www.citadelgame.com/ ,or find further information via their social outreaches on facebook https://www.facebook.com/playcitadelgame/ , discord https://discord.gg/H75yGVT , and youtube https://www.youtube.com/channel/UCffsz1x_cq8-9kDqEmKxOiQ .