By now, most RIFT players have seen mentions of the Telara Saga, it's filled their chat channels, their forums, and the gaming press. From the outside many will look at the adventure and see a highly organized, and professional view of rather normal activities in the game many have overlooked.

Creating the Telara Saga took a lot of work. From developing the raffle system and website to promoting it across all known RIFT Fan Base channels. This event was a massive undertaking by more than 40 people. It's easy to look at an in game event and think that it was just some pickup group, or a fly by the seat of our pants event.  This simply is not the case.

Before we ever announced the Telara Saga, a team of Gaiscioch members got together and brainstormed ideas. We made a list of the known content of RIFT, and what would be accessible to many people at the same time. As we discussed, we came to a vision of where we wanted to take this season of the Telara Saga.

We saw a massive gap in content for players returning to the game or just beginning. Most of the Storm Legion and Nightmare Tide content was skipped by these players. When we asked around many people have never even heard of a Hunt Rift or the World Bosses of Dendrome and Planetouched Wilds.

We started looking into the sheer number of achievements that these events offered and found that we could get people more than 200 achievements by clearing the Hunt Rifts, Strongholds, Nightmare Rifts, World Bosses, and Speed Run Greenscale Blight and River of Souls. On top of the achievements, players will walk away with a new mount, 7 dimension trophies and a bucket of loot. They will also see the old content and unlock the ability to revisit it at any time.

Once we had the plan, we needed the content. We began work on a website immediately and set the launch date three months away. We created several versions of the event pitch. One directed at Trion, one directed at the media, and another directed at players.

When planning events of this scale, it's very important to give yourself time to organize and prepare. As a standard, Gaiscioch traditionally schedules events three months ahead of the time we finally draft the concrete plan. This allows us to set goals and deadlines and ensure that all parts are ready to go by the time of the event.

After we lay the foundation it's time to create the platform which will drive this event. 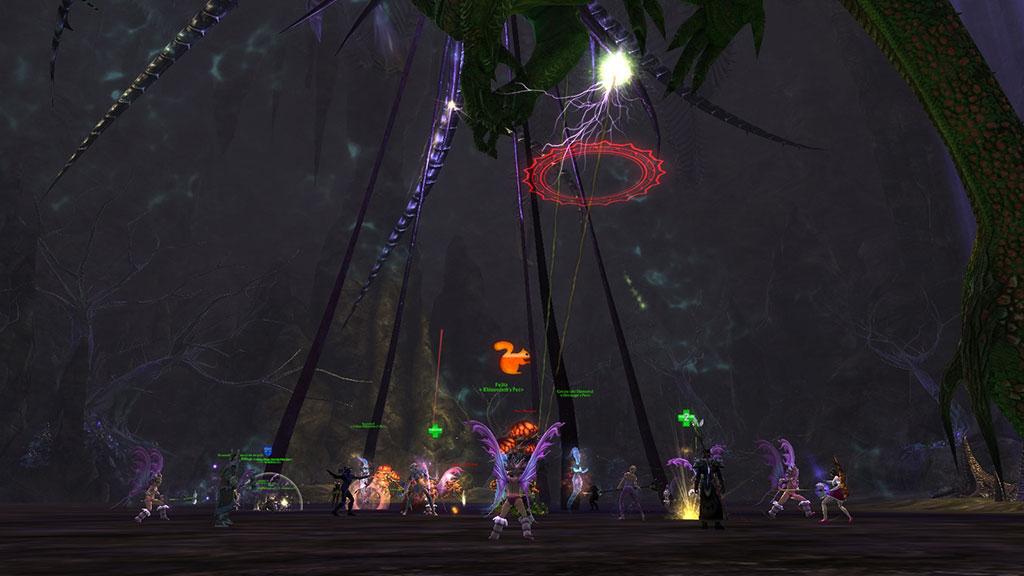 We began with putting the player pitch on the website. The website lists all the vital information, as well as, a little story background to help players get more attached to the series of events. The final step, getting registration open, was a critical step.

By having players register, we began gathering contact information that we will use to send weekly email reminders of the event and also share each week’s winners. It also gave us a platform for handling the raffles with ease.

Our setup was fairly simple. We have a database that players will enter a claim code during the events to add their name to the weekly, chapter, and season raffles, as well as, give them one grand prize ticket that they can choose which prize they would like to try for. The basic raffles just pick a random winner from the list of participants based on the week number, chapter number, and series. The base prizes are awarded in the form of a Key which the winning party can use to purchase the item they desire out of each tiers trove.

We use a 4 tiered vault system.

Giving the player choice of which item they want prevents people from winning items they don't want, while others watch in envy.

The staple in any game we do this in is bags. Everyone needs bag space and we always start with bags as prizes and grow it from there. For the Telara Saga we put a call out to our members to send supplies to our crafter who was mass producing bags.

We also looked at what items were highly sought after. Most of them would take a great deal of fundraising to acquire, others would take completing quests or raids to obtain. Once we have our target list we go to it and gather the necessary pieces to make it happen. We never commit to something we don't have in hand, so the public list is different from our target list.

Having a diverse array of loot is important as not everyone plays RIFT the same way. Crafters value some things differently from Raiders and Dimensioneers values things PvPers might just toss on the Auction Hall. Having something for everyone is very critical. This gives everyone a desirable prize that will keep them coming back.

By now the prizes are stacking up, the website is completed, and you are ready to start shaking the cage. This is when you should build a social media plan, create Facebook fan pages, schedule tweets to go out on a regular basis, recruit friends to help spread the word in games, and make a flashy trailer to introduce your event.  At this point we send our announcement to the press and try to stir up some additional excitement.

The first event is always the hardest. Even now, 15 years after I ran my first, I still get nervous at the kickoff. I know that if the first event doesn't sell the crowd, the event won't be a success. This is the most important week of your event as you need to leave a positive memory in our audience's mind. If they enjoy it, they'll be back next week. If they love it, they will take to social media and share the event with their friends which in turn will help your event grow.

See it in Action

I welcome everyone who is curious to see it in action to come out for the Telara Saga or our upcoming Great Tyrian Adventure in Guild Wars 2. The Telara Saga takes place in the Gaiscioch's annual winter event slot running 10 weeks. You can sign up at https://www.TelaraSaga.com/  to be notified when the next Telara Saga is about to begin.

Watch the replays at: https://www.gaisciochmagazine.com/livestreams/telara_saga/