In 2012, I saw Blade & Soul for the very first time. A stunning mix of Eastern aesthetics and action combat was unveiled to audiences with a flare that simply blew me away. After the Korean launch, a Chinese beta followed at the end of 2013, and marked my first tentative steps into the Earthen Realm. The end of this beta signaled the start of a prolonged hiatus as I patiently waited for Blade & Soul’s eventual release in the EU.

With over three years elapsed since its original debut, Blade & Soul has expanded into numerous markets but yet, surprisingly, has not launched in the West. Success in Korea, China, Japan, Taiwan, a mobile game, and even its own anime series did nothing to hasten its transition, until now. On January 19, NCSoft and Team Bloodlust officially unleashed Blade & Soul on western audiences and I fly kicked right in.

NCSoft’s wuxia inspired MMORPG is developed by Team Bloodlust and includes a number of themes common to wuxia legends. The initial forty-five levels of furious fists, flying daggers, and frantic combat are a common tale of justice, retribution, and a hero’s journey. This martial arts title casts the player as a disciple of the Hongmoon School and the only survivor of a merciless attack. With the rest of the Hongmoon students slaughtered, our protagonist sets out on a quest to avenge their fallen comrades and retrieve the legendary Twilight’s Edge.

Blade & Soul is a free to play title and includes two major monetization options. The in-game cash shop encourages players to part with cash for cosmetic outfits and a variety of convenience items, including skins, health potions, food and unsealing charms. Convenience items can generally be acquired in game and none of these feel particularly egregious. NCSoft has also done a great job of balancing their operation with a, free, in-game currency called Hongmoon coin, which allows players to obtain cash shop items for free. A premium tier subscription also exists, providing some fairly attractive benefits. Increased gold, boosted XP gain and login queue priority are a tiny sampling of the benefits initially available with more added as subscription periods accumulate.

After logging in and navigating a rather frustrating queuing system, it is hard to miss the striking stylized aesthetic of Blade & Soul. Oriental themes are present throughout the game and there is a definite nod to anime influences. This is especially true of character design, where a hypersexualized approach to female characters is clearly evident. It would be remiss of me not to mention that this design does not sit well with a number of players though character creation provides a stunning array of other choices. I spent hours of my time during beta testing choosing from seven classes, four races and an innumerable selection of customization attributes. A ridiculous number of personalization options are also available during character creation which amount to millions of possible permutations.

Character creation is the first indication the game is well serviced by the Unreal 3 engine which powers Blade & Soul. It is also a pleasant surprise that Team Bloodlust’s work has aged relatively well during its transition to western audiences. Character models still look fresh and the gorgeous environment that spreads out across the Earthen Realm is also testament to the artistic team behind Blade and Soul. 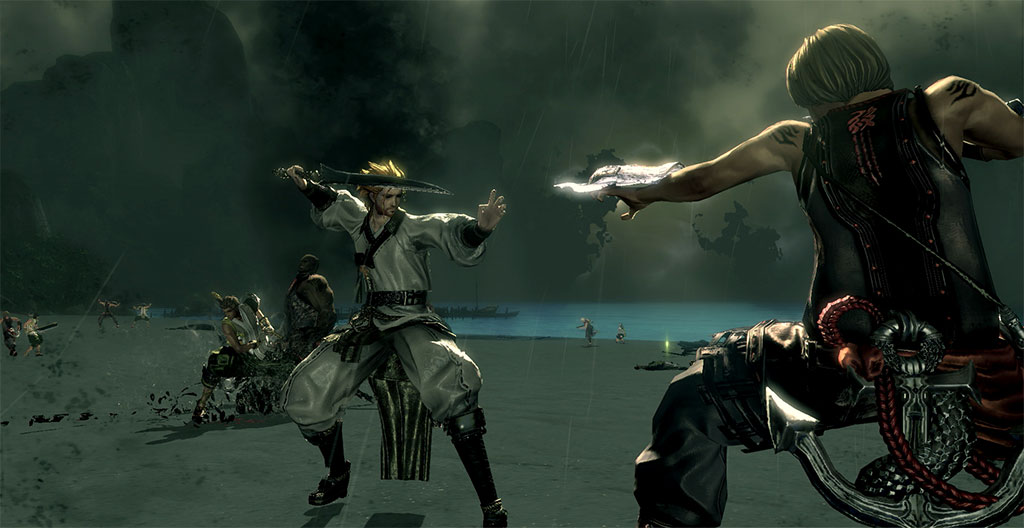 It is clear that the environment of Blade & Soul has been built, from the ground up, to provide verticality of content. Quests can send players up mountains, across ravines and into the clouds, taking advantage of the aerobatics you and your enemies can perform. From riding the Dragon Pulses to Windwalking through the air, getting around is a thrilling experience.

Movement in Blade & Soul is, however, more than just a nifty way to get around. It is an integral part of the combat system and helps to build one of the best examples of action combat I have seen in any MMO. Players can dodge, parry, block, counter and build combos, using a free form combat system that feels like it has real urgency in the world. Positioning actually matters, attacks can be intercepted, and awareness is key. This is no cast and forget system. Blade & Soul’s combat even succeeds in elevating otherwise mediocre encounters into engaging experiences. 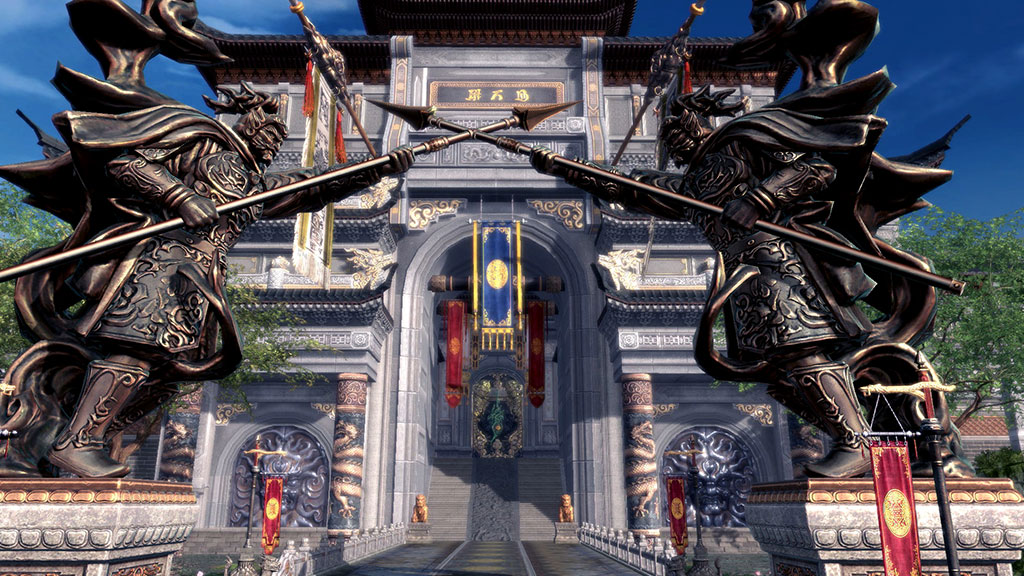 Many of those more mediocre encounters can be found in the game’s open world. PvE is a mixed affair, consisting of open world, story quests, and dungeons. Side quests and open world missions regularly feel superfluous while leveling, and my heroic endeavors even took me apple picking. NPC dialogue and voice acting is, similarly, an irregular affair. Much of the localization work hits the mark, but all too often attempts at whimsy miss and feel out of place. Just as the game’s dialogue cannot completely escape its original script, RNG and the dreaded grind are inherited from its Korean release. While this does not feel unreasonable for a Korean import, much of the less engaging elements end up relying on the fantastic combat system to elevate it above monotony.

Story missions, however, provide a meaningful counterbalance to the pedestrian nature of the game’s side quests. They tell the story of the protagonist’s journey from student to hero, with a fair amount of soul-searching along the way. The narrative is solid and while it is not up to the same standards as NCSoft’s Guild Wars 2, it is engaging and carries the player forward adequately. The first three chapters of the martial arts saga are included in the western launch of Blade & Soul, with the remaining six acts due to follow swiftly in subsequent updates.

Dungeons are an entirely different experience from open world and story questing. Over twenty challenges are available for four or six-player parties to dive into, ensuring there is plenty of content. A mature, well-designed dungeon finder makes locating friends extremely easy and eliminates any wait for groups. Team Bloodlust’s move away from a traditional class trinity also helps in this regard, and even after graduating to hard mode instances, Blade & Soul’s dungeons are not hindered by any lack of healers. Dungeons could legitimately be labeled as easy at first glance. On early instances, mobs are simply overwhelmed by a furious deluge of fists as players burn through low level content. This all changes, very quickly, during high level encounters as the concluding dungeons provide an adequate challenge. Telegraphs are removed, player roles become critical, and players that are unaccustomed to action combat are regularly left decimated.

PvE in Blade & Soul may be a mixed bag, but competitive play stands out as the game’s premier feature. Arena battles are a furious rush of activity and reminiscent of games like Street Fighter, Tekken, or anything from Platinum Games. Players build a flurry of combos, grapple, counter, dodge, block, and perform amazing aerial attacks, as they go 1v1 or 3v3. A reactive UI modifies the active skill set based on any given situation, allowing for swift, decisive reactions that keep combat careening along at a satisfying pace. Each of the seven classes also has its own idiosyncrasies and strengths. Even the benign looking Summoners and their cute pet cats are a surprisingly capable foe in these instanced encounters.

Although ranked PvP competition is not quite in full flow yet, February’s Rising Waters update marks the start of preseason and the introduction of PvP specific currencies. Future content drops will kick off live competitive play and eventually see the top Western players competing against a mature e-sport scene at regular world championship events. After a recent invitational tournament, NCSoft has expressed hope that this might happen as early as 2016, when western players were surprisingly adept at mastering PvP combat.

Open world PvP also benefits from Blade & Soul’s intense combat regime. Players engaging in factional combat can gain points for kills, which they turn in for various rewards. Open world PvP is both deeply satisfying and hugely frustrating in equal measure. The factional system allows players to flag themselves for combat using their wardrobe costume. Just equip a Cerulean Order or Crimson Legion outfit and find an opposing player to get started. This is an inspired choice that allows players to flag for PvP as appropriate and leverages a fundamental part of the game to do so. Reward systems also appear to be well thought out and are almost as satisfying as watching your opponents crumble. However, the wealth of over-powered, over-leveled players, cutting a swathe of destruction in low level areas is an issue that I don’t expect to see resolved soon.

This contradiction is atypical of Blade & Soul. It is an exciting, inspired and deeply satisfying experience when it excels. I’ve had great fun running dungeons with friends, improving my skills, and experiencing the combat in PvP. Classes are also distinctly unique with something new to each of them. Very few MMORPGs reach this level of quality although a few systems do undermine the overall experience. Archaic queuing systems, some less than stellar side quests, shaky dialogue, and a reliance on RNG manage to tarnish the shine from a fantastic game.

Despite these drawbacks, Blade & Soul is still a lot of fun and I find myself looking forward to logging in. It has entertained me, provided a great range of content, and still has more to come. Future updates are due to bring new multi-player dungeons, level increases, clan expansions, new costumes, extra classes, improved game systems, story expansions, and the massively popular Mushin’s Tower.

This might not be the bleeding edge of MMORPGs, but Blade & Soul strikes true with a package that provides much and still has a lot more to give. Rise, Strike, and avenge now and for free, at www.bladeandsoul.com.