Beginners Guide to World of Warships

From the makers of World of Tanks and World of Planes, Wargaming.net has decided to take to the seas with World of Warships. I have studied naval combat of both World War 1 and World War 2, and have also toured various Naval vessels. I am a Navy Nerd so this game really appeals to me. The ships you command are from the World War 1 to World War 2 eras and include Destroyers, Cruisers, Battleships, and Aircraft Carriers. As a lover of naval combat and Navy ships, I was ready to take to seas. In this guide we will go over the basics and getting started in World of Warships. 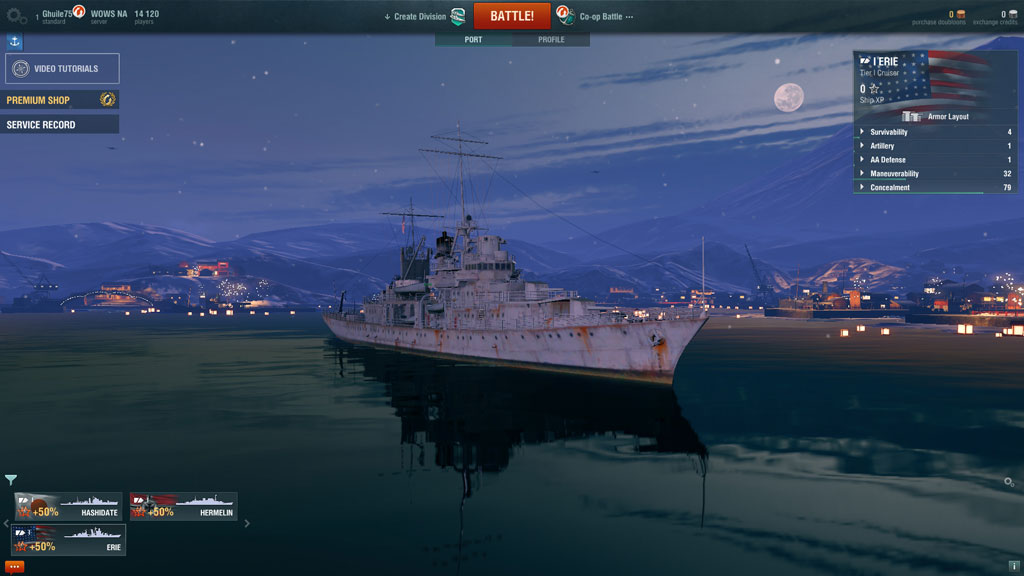 Once you have created your account and logged in, you will be brought to your port. This is where you build your fleet of ships and also where you select what ships you want to take into battle. You can customize the look of your port with a few presets. As you level your account you will unlock other functions at your port such as modules for your ships, exterior looks and skins for your ship, and most important you will unlock your ship tech tree.

The Ships and The Tech Tree

Now to the most important part of World of Warships, the ships you will be using. The ships are broken into 4 classes: Aircraft Carrier, Battleships, Cruisers, and Destroyers. The ships also have levels, or tiers, and there are 10 tiers. When getting started in World of Warships, you start out at account level 1 and you will find 3 Tier 1 ships: a German cruiser, American cruiser, and a Japanese cruiser. The different ship types and classes are also divided by their country. Some of the countries are limited to one class of ship, for example the country know as Pan-Asia only has Destroyers. The USA and Japan have  Destroyers, Cruisers, and Battleships, and are the only countries that have Aircraft Carriers.

At Account level 1 the ship tree is locked, play one battle and you will unlock the tech tree. The tech is what allows to progress and unlock new ships and ship classes. You can also purchase ships using doubloons that are purchased with real money in the Cash shop, but it is not required to play the game. The ships purchased in the cash shop are generally not better or worse that any other ship you can unlock through normal play. 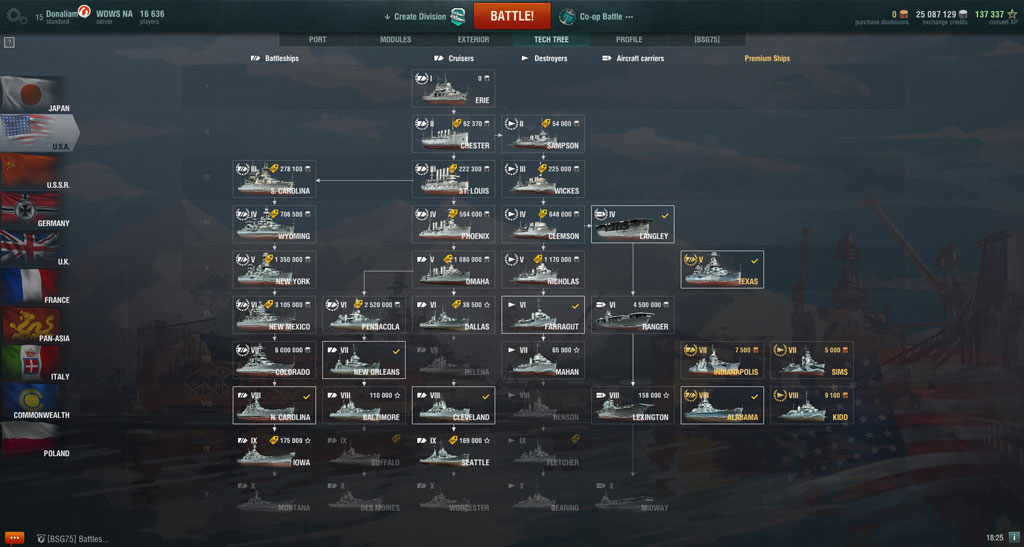 To unlock a new a ship, you simply have to use a ship and gain experience through playing in a battle. The battle will award ship experience points (XP). You use the XP to unlock research modules on your ship. The modules are used to enhance your ships abilities, such as greater speed, longer range, stronger hull, advanced anti-aircraft, etc. After researching the modules, you will have to re-earn the XP again to research the next module, or even the next ship. XP is also a currency along with the in-game coin. After you research a module you will have to  purchase them using in-game coin. Coin is pretty easy to obtain through playing. One other note, the XP earned on one ship is not transferable to your next ship or any other ship. At a higher account level you do unlock global XP which can be shared among all ships and you will earn global XP in battles.

World of Warships has multiple battle modes: COOP Battles, Random Battles, Operation of the Week, and Clan Ranked Battles. At level one you are limited to COOP Battles only. In COOP, you are teamed with 7 other players and you just play against 8 Bots. Sometimes if there is not enough real players, bots are also placed on your team. The bots team will consist of the exact same ships and tiers on the player team, meaning if your team goes in with all American T1 cruisers, the bots will be the same.

Random Battles are player vs player battles that usually consist of 24 players, with 12 per team.  The teams are a little less balanced compared to COOP mode. 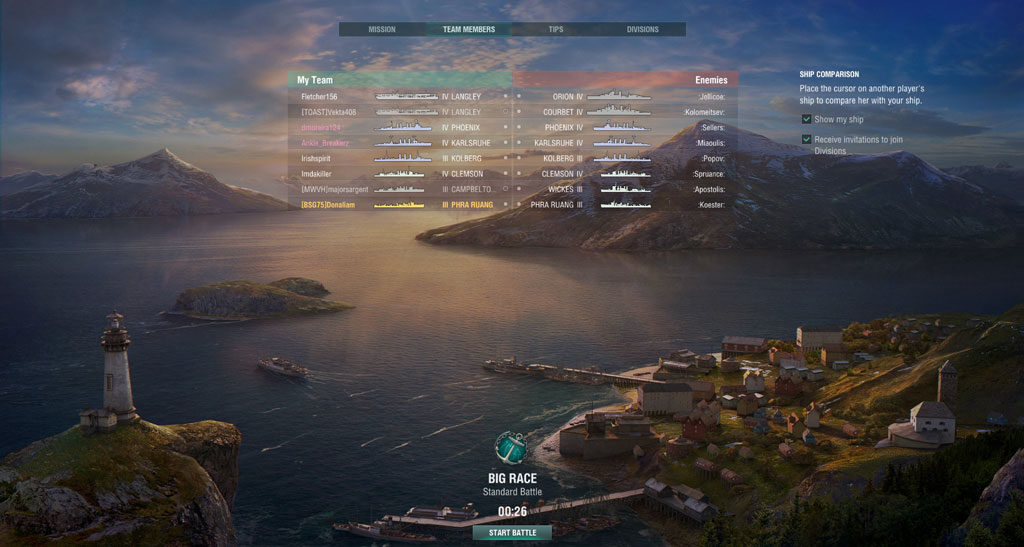 If time runs out and the points are equal, the battle will end in a draw.

Each battle will consist of one of the 3 types: Domination, Epicenter, and Standard.

The ships in each battle are worth points for killing and points for losing. 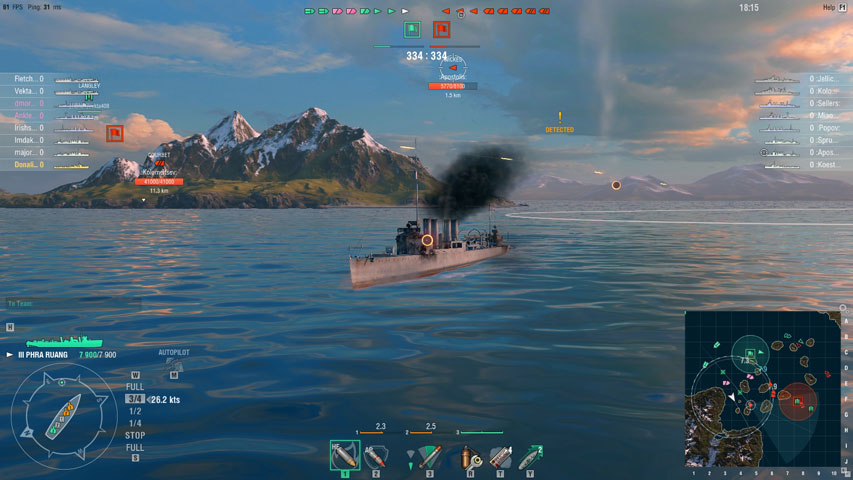 Achieving Victory awards more XP and coin for the Ship that you are using. After the battle is completed, your ship will undergo a post battle repair that costs coin. The cost varies depending on how much damage you take. The cost is auto deducted from the post battle award.

Pull up the lines, set the watch and weigh anchors. This is the basics to get you started on your campaign in World of Warships. I personally have enjoyed playing and as a student of Naval History, I enjoy using various ships from history. I look forward to unlocking other well known ships from history such as the Japanese Battleship Yamato.

As you set sail, I wish you fair winds and following seas.

About World of Warships

World of Warships lets you experience epic naval combat like never before. Assemble and customize a fleet of gorgeously detailed ships and bring them into a variety of realistic battle scenarios across beautifully rendered real world locales. Jump into a random skirmish for a quick PvP clash, team up with friends for a challenging PvE scenario battle, or put your skills to the test in ranked battles!