A Sneak Peak at Crowfall

“We are immortal. The gods chose the best of us to be champions. They send us to the dying worlds to fight. To collect the souls of the damned. The mortals fear us. They see us as executioners and scavengers. They call us crows....”

Who is Artcraft Entertainment?

Based in Austin Texas, ACE is an independent developer and publisher of cutting-edge Massively Multiplayer Online Role Playing Games (MMORPGs) that seek to push the boundaries on what an MMO can offer. Their first game, Crowfall, was announced in January of 2015 and quickly gained a loyal following. Choosing to go the crowdfunding route with Kickstarter, Crowfall raised $1,766,204 from 16,936 backers making it the 15th biggest video game, and 47th largest successful kickstarter project.

So What is Crowfall?

Crowfall is the brainchild of Gordon Walton and J. Todd Coleman and is described as an MMO mixed with a Game of Thrones-esque large-scale strategy game; basically a throne war simulator. According to Todd Coleman, if Game of Thrones and EvE Online had a secret love child, you’d end up with Crowfall.

Players or “Crows” control the universe and shape it as they see fit. Each world is unique and players join teams, factions, or guilds to fight for control of the world—with a strong focus on time, destruction, and power. The worlds themselves feature non-persistent maps that are destructible, various rule sets, and unique victory conditions that take skilled play to survive.

It’s About Time, Destruction, and Power

One of the key ideas behind Crowfall is that worlds don’t last forever. Each campaign world is its own server and it will cycle through the four seasons (approximately one year in game time) over a set period of real world time. As the campaign progresses toward winter and its end, the world becomes a harsher, deadlier place with resources becoming more rare and the undead legion called the “Hunger” consuming everything in their path. Once a world reaches the end of winter or its win condition is met, that world then goes offline forever and players return to their home world with all the spoils of war.

The worlds themselves are created in a similar vein to Minecraft: everything is destructible. The idea behind this is to allow for truly unique campaigns that players can shape, conquer, and destroy on a whim.

Crowfall also gives players the Eternal Kingdoms, or persistent worlds where they can set up a solid base of operations before heading out to conquer the unknown. Essentially it can be thought of as the PvE portion of the game. Eternal Kingdoms will never be destroyed and they are entirely player-controlled right down to what ruleset they want their subjects to deal with, what kingdoms they want to trade with, and who they want to offer land and titles to. The most important thing to note about them is that they are devoid of any resources used in building or furthering your kingdom. In order to advance, players will have to embark out into the various campaign worlds. 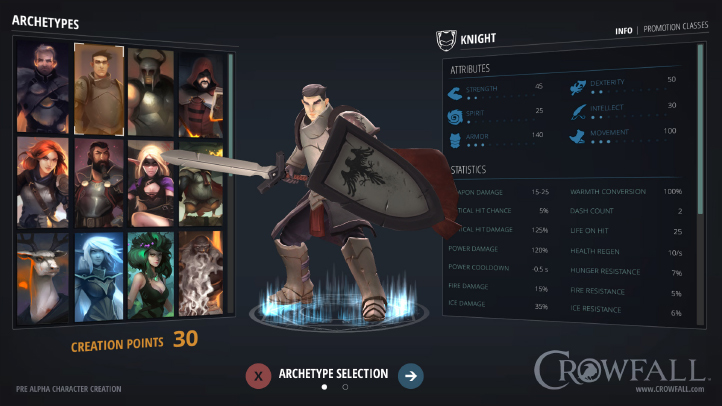 Character creation is all about choice and Crowfall puts a unique spin on it. When players start out each character is allotted a certain number of points that a player can spend as they see fit. Players choose an Archtype/Race combination from a set of options. Each Archtype costs a set amount of points and some will cost more than others depending on what a player chooses to specialize in.

Players are also able to use Advantages and Disadvantages to further customize their character. These represent specific talents, traits or backstory elements that change your character in unique ways. Advantages will cost you points while Disadvantages give you points to place into different traits.

Character features such as body type, facial features, and hair are fully customizable.

In Crowfall there are two main types of resources: those used in personal crafting and those used in conquest. Think of it as resources and materials. Resources are harvested from the environment (stone, iron, wood) and are considered base ingredients for crafting. Materials can be refined using various points of interest (factories, quarries, mines, mills) and are the base ingredients for building and repairing structures.

Crafting is the main key Crowfall’s player-driven economy and will function in a similar vein to Eve Online with influences from Ultima, Star Wars Galaxies and Shadowbane. This allows players to create awesome items and gear while encouraging player interaction and making crafting something worthwhile. Crafters are able to mark their items and build a social reputation. The fact that gear decay and full looting is enabled will ensure crafters are never in short supply and items are always in demand.

All characters are able to craft some basic things right out of the gate, but it will take a truly dedicated player to explore and seek out the rarer recipes or capture Thralls (souls of the fallen that you can bind to weapons) and make a name for themselves. 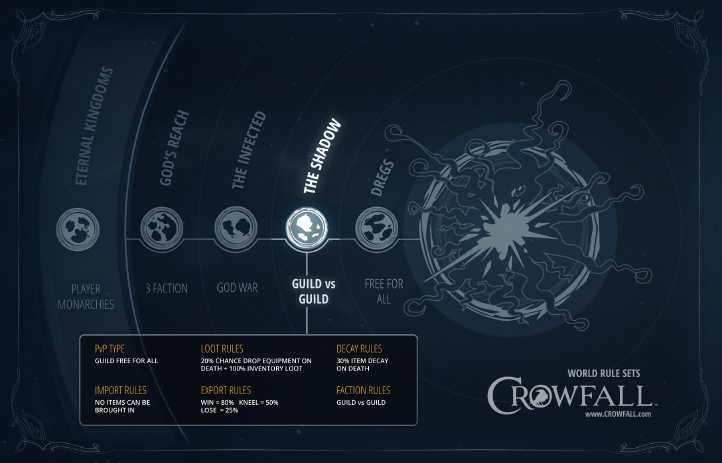 Campaigns are broken down into the following types:

Each campaign has its own unique rule set that can range from 0% loot drop on kills right up to 100% full inventory loot. The harsher the rules and the harder the campaign the better the reward and the rarer the resources found. Players are able to partake in more than one campaign at a time.

At the start of a campaign, players are dropped into the newly created world filled with villages, mines, gatherable resources, and ruins. Much like the game Civilization, the world is a harsh place of unknowns covered by a fog-of-war and it will be up to the player to use the environment to help them survive. With the resources they gather, players are able to craft weapons and build castles and fortresses for defense against the other players and wildlife. As the seasons progress, resources become more scarce, and the world’s monsters become more and more powerful.

Crowfall looks like it will be using an active combat system that will be a little more active than most people are used to. Gone is the traditional tab-targetting. Instead attacks use various shapes that are centered in front of the player and it will be up to them to position or dodge and dash their way to victory. The overall goal of the combat system is to make it function seamlessly with the environment to give it a more fluid look and a life-like feel that requires more tactical thinking rather than your typical button mashing.

No holy trinity and a de-emphasis on a healing class is also something the creative minds behind Crowfall are focusing on. There are still classes that will focus on defensive play and offensive play, but with lack of a pure combat healing class the encounters become much harder and more deadly. Tactics and smart use of skills are going to win the day.

So Where’s the PvE?

If you are one of those players looking for your typical dungeons, raids, and other instanced content, its safe to say you aren’t going to find it here. Does this mean there will be no PvE at all? Not necessarily. Worlds will be teaming with NPC mobs and bosses that will need to be dealt with in order to capture various resource nodes, points of interest and to flat out survive. Many monsters will require groups of players to take them out and even then the fight will be tough.

There will also be “quests” or tasks for players to perform that could involve searching for various relics to help their kingdom or they might need to kill certain creatures to obtain things only dropped by that creature.

Not Your Typical MMO World

Crowfall is definitely shaping up to be a heck of a lot more than your average MMO and considering the creative genius behind it, this should be no surprise. The most appealing and probably the most unique feature Crowfall has to offer is its focus on eternal heroes and dying worlds, essentially creating a never ending endgame that will keep players busy for quite a while. The base module is estimated to be delivered sometime around Winter 2016. The first release (with partial functionality) should begin alpha testing late Summer 2015. 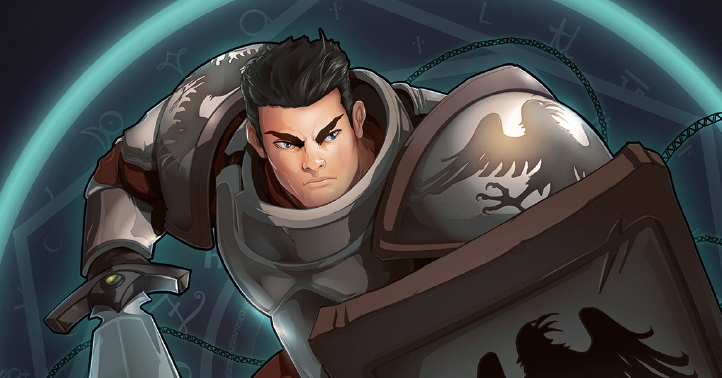