A First Look at Kingdoms 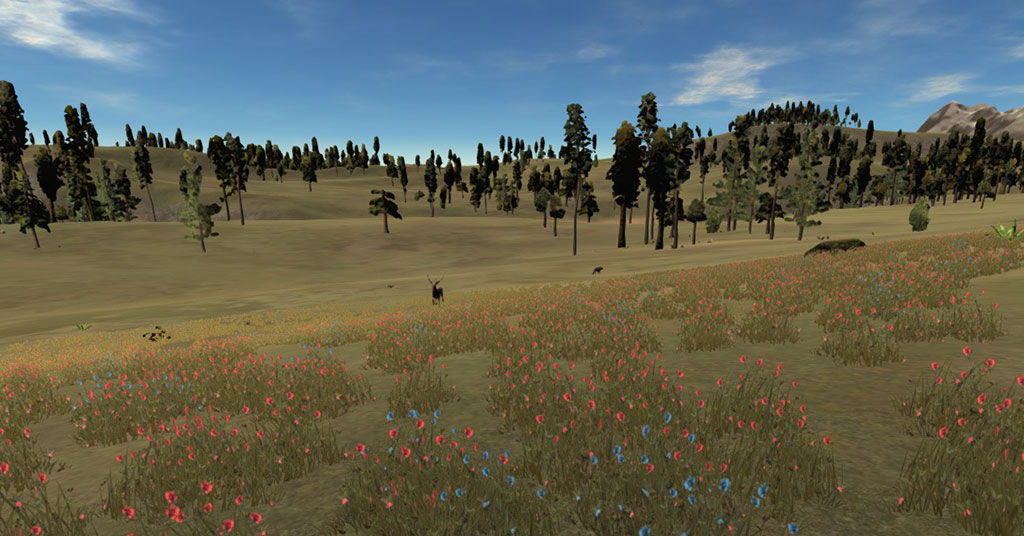 Kingdoms is an interesting early access title built in Unity. It takes the idea of Mount and Blade, and turns it toward a 3d persistent simulator via your viewpoint. The game has big plans, some interesting mechanics, and a team which is updating frequently. Right now, the game is in early access, and it needs a lot of work.  There is, however, the promise of something interesting showing.

When you first load the game, you will generate a world with a few parameters. You can set the day/night cycle timer, and the NPC count. Once you do so, you select from a few image options, and then pick some perks. Perks control what you can do, and how effective you are. If you intend to start your own village you will need scholar, worker, and taskmaster. In the current state, NPC migration is not implemented so this must be done in the first day, but that should eventually change. Chopper is very important early for getting lumber to build with, but can easily wait for level two.

You will start off with a yellow bar showing your stamina. When you run or work this bar will go down, requiring short breaks. You can see it in the image above. One of the first things you will need to do is learn the controls and set your inventory up. Tab will open a menu screen like this next image shows. 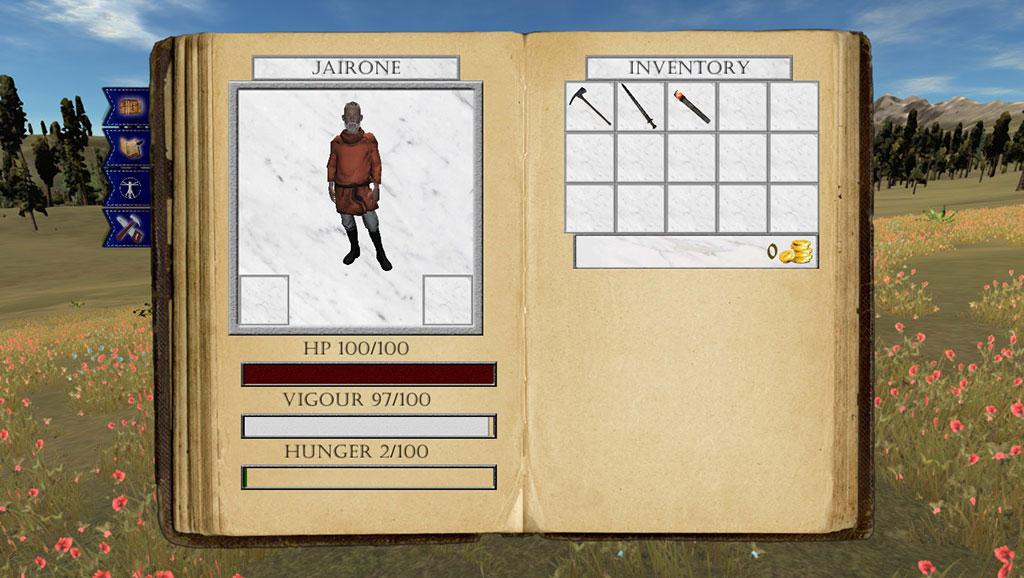 There are four icons. In order from the top, they are inventory, quests, character, and crafts. As you complete quests and gather resources you will gain experience and levels which allow you to learn more perks from NPCs. Your first order of business will be to get some food, just start searching the ground. Food is more common in woodlands, so look there! You will see a weight icon when you can loot something.

Your inventory actually changes based on the perks you selected to start. In my case I made a woodcutter. Thus I start with a good axe. To equip an item simply drag it over. The inventory is currently very basic, but that is early access!

Next up, you need to decide where you want to sleep at night. The NPCs will be building villages, and if you are building your own, they will flock to it. To build your own, simply place a well somewhere outside other villages. Remember, it must be the first day/night, or all the NPCs will have gone to other villages. This is eventually planned to change with NPC migration, but as it currently stands you will have an empty village!

If you are not building your own village you can look for one you like on your map. The mousewheel will zoom in and out. All towns show up on the map directly. Farms, caves, and other smaller structures that aren’t just homes or shops in a town will show as question marks.

Once you get close enough to those other structures your map will update with the appropriate icon. You will need various resources from some of those structures, or maybe wish to plant a garden at somebody’s farm. You can of course make your own farm too.

Your next task will be to put down a home of some sort. If you have the worker perk you can build some houses, advanced perks will unlock more buildings. Simply hit tab, go to the crafting part, and select what you want to place. The building will show up in front of you, moving with you. You must find fairly level ground to place it, if it is blocked by anything it will show red instead of the normal colors. You can sometimes fit a building places it would otherwise not fit by rotating it using ‘q’ or ‘e’. 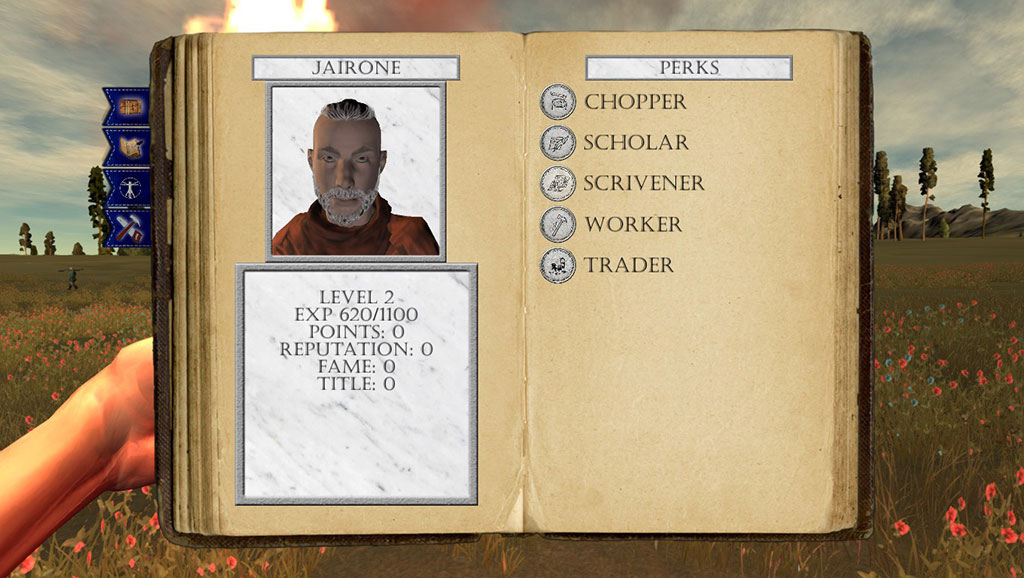 As you complete tasks you will gain levels. Each level gives you 10 points to learn new perks. In the case shown above, I picked some perks to go with my woodcutter and put down his own house. I also picked trader so I could build shops and buy/sell items. If you don’t build a shop you must wait for an NPC to do so, which takes longer. They will do so, however.

The next order of business is to get more wood to finish your home. Unless you have worker your first home will be a camp. If you have worker you can skip straight to a house. To get wood you need a weapon that can chop. Most edged weapons can chop, but axes are the most efficient by far. Weapons go in the left inventory slot. To chop down a tree you need to pull your axe out, which is ‘2’ by default. Then you hold your mouse button when a circle shows while in front of a tree. The circle will slowly fill. Once full, you will get your lumber and the tree will fall.

When you first fell a tree it sticks around. I like that it doesn’t just vanish into thin air! The wood is gathered repeatedly from the stump, and the first such gathering removes that big tree graphic. So you get the nice experience of seeing the tree fall and stick around. You also have the ability to clear it up and not have to deal with that big old log though.

Building a village is a matter of working with the NPCs. You could make one all to yourself too, but you get a big advantage with NPCs. Not only do you need them to learn new perks, they can party with you to fight foes. They also offer you quests!

Accepting a quest is as simple as walking over to the village bulletin board. You take a task from the board, complete the objectives, then talk to the person who posted it. Initially this is more difficult as nobody has a home and they run off to do things. Once they have homes, however, you can frequently find them near their house.

When you complete a task the conversation window shows a different screen than normal. Normally you have three areas to discuss, with a variety of options. In this case, you get a single option to complete the quest instead of the full dialog setup. Each completed quest gives experience and gold. Just laying out the homes for a village can easily level you up several times over.

You may not see all buildings requested yet. The game is still a work in progress. However, the system is improving and has had many of the identified bugs completely squashed.

Kingdoms has a ton of potential. It is definitely early access, with all that one could expect of that condition. The game promises to offer an interesting multiplayer experience with a variety of playstyles. It also shows great potential in looking at advancing how we see NPCs in our games.

While the current version still has a ton of work to do, it may well be worth checking out. The game offers some things rarely seen. I will be interested in seeing exactly how the finished product looks!

Many thanks to the team at Oreol for your work on the title!

Learn more about Kingdoms at: