A Blast From The Past

I decided it would be fun for members of Gaiscioch to pull out some past memories to share with our readers.  For this issue, these are mostly from older games, but Guild Wars 2 has been going long enough that there are now some “ole time” memories, even as we continue making new ones.  The contributor will be noted with each story. 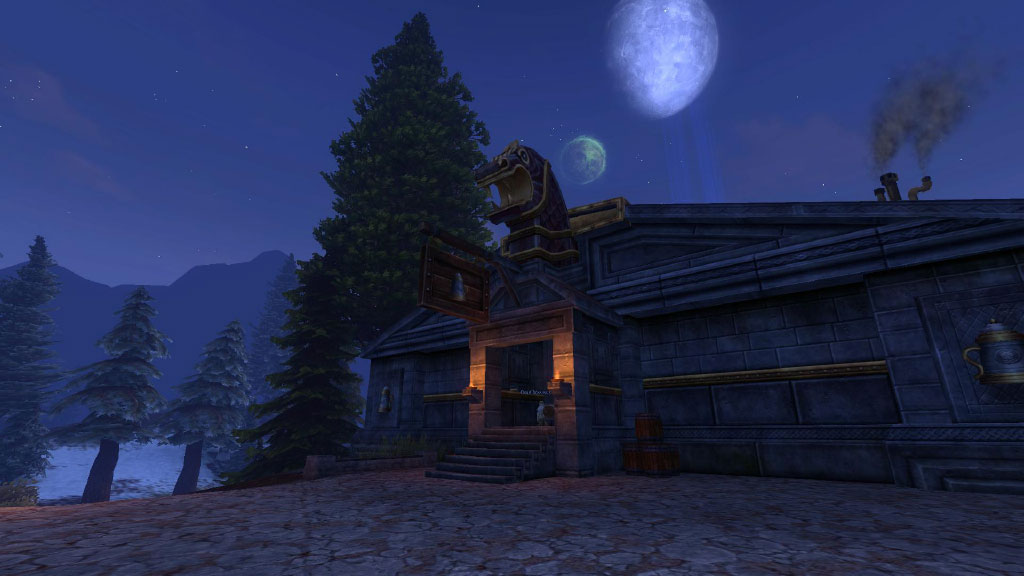 Warhammer Online:  Save the Ale!
Briseadh

Clanorton and I have been friends since this game, starting out in a roleplay guild that I put in the Tuatha to work with Gaiscioch when I became the leader.  I remained a Tuatha guild leader the entire time I was in Warhammer in more than one guild, but when this roleplay guild dissolved as we moved to Badlands server, he put all his characters into Gaiscioch.

On a day, not much different than any other, Briseadh found herself out on the battlefield with her friend Clanorton and another member of the family.  In the lull of battle, while waiting for the keep to be fully captured and the gates closable once more, the two elves were standing on a low wall outside the inner gate watching the road up from the outer gate.  Clanorton, a dwarf, walks up behind them saying something like, “Sure, make the short guy feel even shorter.”

A stream of bad short jokes and jibes amongst the three ensued causing other fighters at the keep to join in.  There were still several minutes left before the work would be complete at the keep when a report came in that Bugman’s Brewery was under attack.

Briseadh said, “Let’s save the ale or Clanorton will be even more upset.”

In true dwarf fashion Clanorton roars something about the ale and goes charging out of the keep with his elf friends in tow laughing as they went.  They got laughing all the more realizing most of the forces had just ditched the keep to follow them.  Thankfully the keep did become secure despite this impromptu change of tactics and ale was had by all at Bugman’s after a fine fight.

NOTE:  We never did crazy stuff like this when Foghladha was leading.  This is where my Gaiscioch handle came from as she was my first character to ever be in the family and I have used it as my handle with the family ever since. 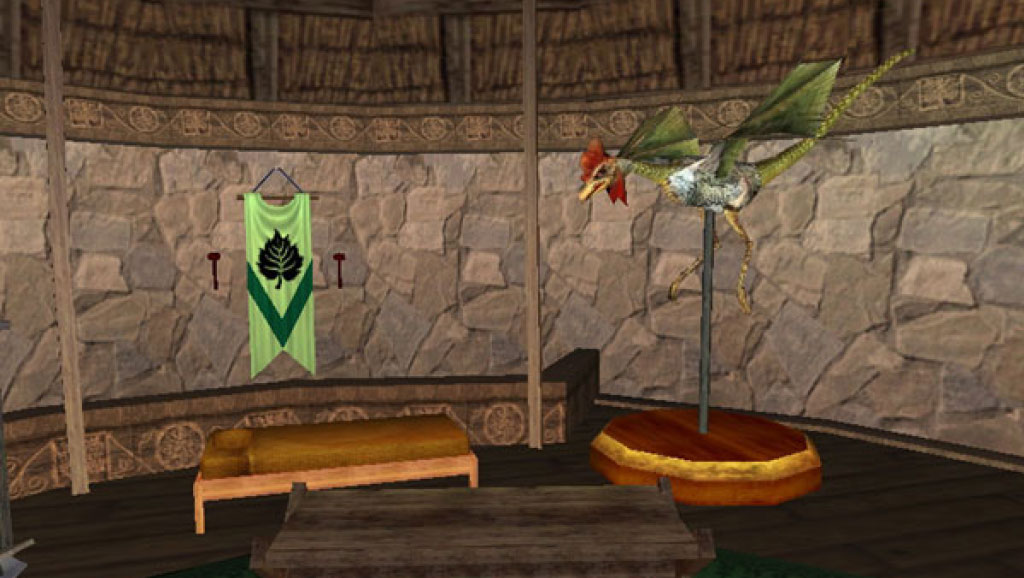 Back in DAoC, Fog wanted me to help him kill a chicken to have a trophy for our new guild house.  I thought, “How bad can killing a chicken be?”  After dying several times with Fog saying, "Don't worry, I will heal you," we killed the chicken.

He took it to the taxidermist to get it stuffed and mounted.  With much anticipation we went to set up the trophy, only to find it took up two floors of the guild house!

I remember Kaytlin, Falstaf, someone else, and I taking one enemy garrison.  The garrison was almost fully upgraded, with waypoint, reinforced walls, but for some reason paper gates.  With a golem and our plucky sense of adventure, we attacked.  We were certain we were going to get wiped when the enemy showed up.

We got through the outer wall and onto the inner door and killed the siege and the guards.  We were almost there!  Keeping an eye behind us, we made haste in destroying that inner gate which was paper, not upgraded.

As it fell, we rushed to the Lord's Room, where we fought like lions!  The circle was up, it was ticking our color. And then... SUCCESS! We took their garrison!  The four of us acquired some great points for our daring adventure.

It was a dark time for troop morale.  Mythic had recently made large changes to the design of Keeps, adding a second access ramp to the keep lord above.  Players screamed that keeps could no longer be defended against a larger force.  A rare few commanders, however, refused to yield and developed new tactics.  One such commander was Foghladha.

Troll Country (Tier 2 Empire vs Chaos).  Our foes outnumbered us 3-1.  The situation seemed hopeless, and map chat was filled with the cries of defeat.  We paid them no heed and remained undaunted.  It was inside the walls of Stonetroll Keep that we decided to finally cease our evasive raids and make our stand. As the unending swarm of the enemy massed at the gate, Foghladha spelled out the details of the "Pandora's Box" defense.  The tactic had been proven effective, but it was still new and had yet to see proper testing against such overwhelming odds.  As the gates fell, we readied ourselves to sell our lives as dearly as possible before the end.

But the end did not come.  Our defenses held strong against wave after wave of foes.  Their ranks quickly replenished from a nearby camp, confident that so small a force as ours had never before repelled a force of such size.  As best I recall, we held for two hours that night before our foes continual failure to take the keep had finally dwindled their numbers and morale enough for us to push out and finish them off. Pandora's Box had stood strong beyond our greatest expectations.

Many were the cries of hopelessness directed at Foghladha at the beginning of that evening... by the end of that siege Foghladha had recruited six more members to the Gaiscioch ranks.

NOTE:  I have many fond memories of the Pandora Box defense and I am glad Dargron was able to share one such test of it for us to read.

Crifting - in the days of Rift they created a special type of Rift dedicated to crafters.  In the process of trying to get people to come to an event our main leader for crafting rifts sent out a message that said Crifting instead of Crafting.  After a slew of friendly joshing, it was agreed these events would forevermore be called Crifting.

Weast - This one is my fault and a recent one from last year doing my weekly Vet Map Clear events, which entails us going to one of the veteran level maps for the Ebonhart Pact in ESO.  So we are at the most western point of the map and I state we are going West.  Wait, we can’t go west!  Make that Weast!  Weast is starting to turn into the word to mean - “I meant the opposite direction than I said.” 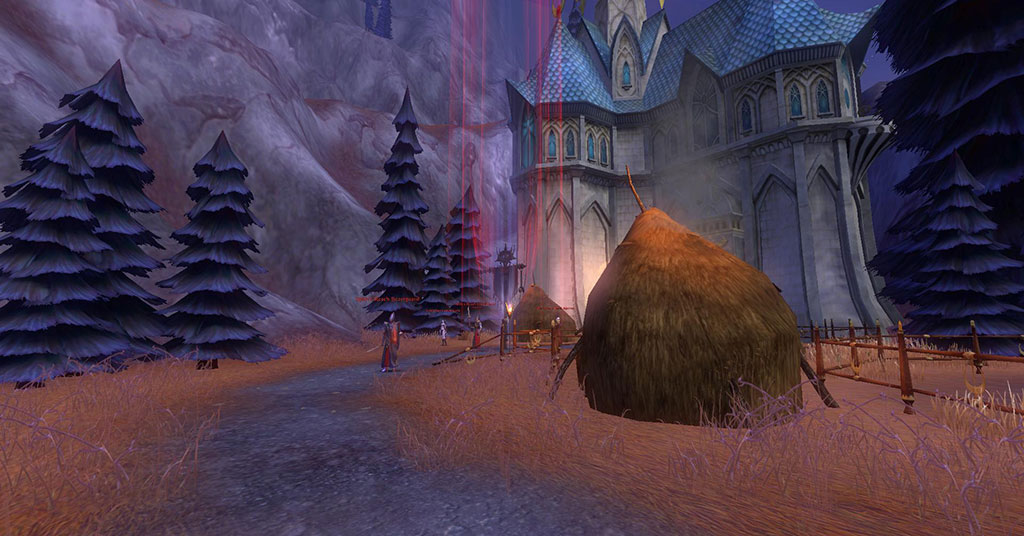 In Warhammer Online in one of the Tier 2 areas for RvR, there was a stable that was a tactical capture point.  While waiting for the capture timer to complete, Fogladha would state that there was a needle in the haystack for the achievement, The Gullible.  Some of us would even run over to look knowing the gag.  The best ever was a guy that the next day, maybe even two, was STILL trying to find that thing even after we said we were joshing.  Even with how often we pulled that joke, people fell for it.  The fun part is that it doesn’t mean the crew reviving this game won’t put something like this in there.  You never know.

In Rift, there is a very high bridge with a very tiny stream running under it, far below.  There are some achievements for jumping off things and living throughout the world.  One of them was actually not far from this bridge, but Foghladha, who loves cliff diving in games, stated they had put an achievement in the game for this bridge.  Some people would jump to die just to help make others do it, though the first time he told people, he got a good deal of the family suckered in.

You never know what this fun family will come up with in a game, sometimes going beyond our own crew and out into the community.  I am hoping to share more stories in future issues as the family members remember old ones or create new ones to share.  Thank you to everyone that has helped make this a wonderful gaming community to be a part of.