10 Reasons to Explore the Thunderhead Peaks

I’ve enjoyed a lot of what ArenaNet has done in the expansion of Guild Wars 2 over the years. Sure there are parts that drove me nuts, some that turned me off, but there is something about this game that keeps me coming back, unlike many other games I’ve played. I will admit part of it is the great community at Gaiscioch. However, it’s the fun of seeing what new twist they put in to keep it familiar, but different. What achievements will they give to infuriate us while we scrounge our way across a new map? I’m definitely a goal oriented person and like the fun of figuring out the new things they add, even if I haven’t completed half of what is there already.

This list of ten reasons contains my quirky sense of humor and some are side things. My hope is to inspire you to look at the map in a new way, and possibly make you recheck a thing or two.

If you thought great depths were found in the Heart of Thorn maps, this one appears to use the entire vertical space a map can have. I’ve literally bounced my head on the ceiling seeing how far up and over mountains I could go. Going north to south you will hit a few massive drops in elevation until you are down at what probably is sea level with ice floes. 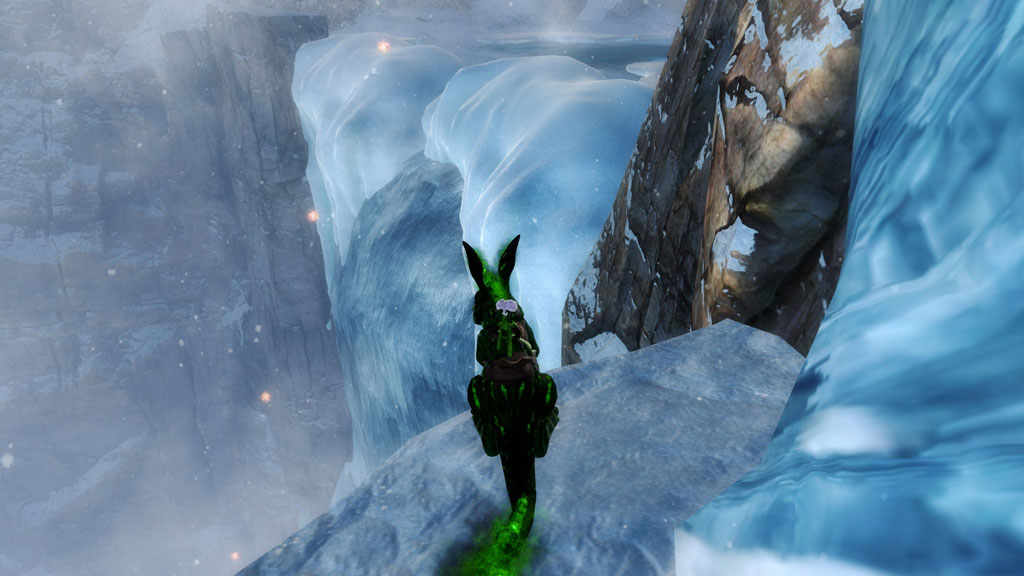 Don’t fall off a cliff here! The journey back up might be fastest with a waypoint, otherwise it is a long run around. You could work on a combo of springer and griffon if on the side of the cliff, but sometimes it takes several moves to even get part way up. Much like Verdant Brink, the bottom of one of these gorges will kill you even if you survive the fall, the stuff down there will zap you until you do. At least that is only one gorge. Most places you fall off will land you on safe terrain, though there are plenty of things that will attack you.

This has led to many fun adventures of finding the right tunnel to get to a POI or the right way to jump and fly to a mastery point. I hope you don’t have vertigo!

Some of the places you can go are nothing less than a three dimensional maze. Trying to get through them may make you miss the fun things to collect, like the dwarven chests strewn about the map in some of the craziest places. You may have to zigzag around walled off areas over pits or find a way to swoop down through a hole with several twists and turns. Imagine coming back up through it with the springer.

Another fun thing is you can’t get there from here because your mount won’t fit and you can’t jump up to that hole or glide to it from somewhere else. These nooks need the new mastery called Bond of Faith, which launches you off your mount into the air and you can ‘fly’ a short distance to hopefully land in these nooks. One of the funnest things to try is at the top of the central chamber leading to the dwarven treasure rooms. You can find a dwarven chest way up there. Another is a chest near a mastery point in an ice cave.

Good luck finding your way around and getting into some tight places!

Them dedge and their way of oil drilling have come to quite a mess here. Slide on it in battles at the oil pumps collecting it so it doesn’t get lost while fighting oil elementals that look like slugs. If that isn’t crazy enough, there is the big daddy of them all, you fight in a pit that has oil pumping into it from all three dredge pumps. Skid around for oil trying to get up out of it to deposit it all while beating on the slug at the same time.

This legendary mess is one of the two metas on the map. You can find a meta every hour and they alternate between the dredge oil in the south and Thunderhead Keep in the north. You will want to do both of these, in order to get parts for an item that helps you find secret chests and gives you access to the dwarven treasure rooms.

You also get an achievement for all this oil collection, so be sure to keep slip sliding your way to gathering it all.

Skimmer your way around the ice floe for a fun ride and lots of that volatile magic you need to buy things associated to Path of Fire and Living Story 4. If you are still working on getting experience for the Bond of Faith mastery, put on some buffs and skim through this area for a quick boost of experience. Taking one of my friends through here made her acquire 12% of the experience required in just a few minutes. I cannot remember what experience buffs she had on at the time. We have a guild buff vendor for Gaiscioch and she may have had that on as well as a food buff. Buffs of these types are always a good thing to use when you need to build up mastery experience in a new map.

After killing that slug you may need a bit of relaxing time, so go on a joyride for volatile magic and experience.

Dredge fishing that is. Yes, help the dredge fish their way at several fishing holes along the river that flows out to their oil drill area. All you have to do is use the special bait and fish fly out of the water for it.

Want to make it more challenging? Make that fish land in the collection bowls in the area. This will take some practice, but you will be rewarded with an achievement when you succeed.

Note that fishing hole I showed you above. If you can get your roller beetle to land in that after hitting three ramps from a great height above, you get an achievement. Start out a little northeast of Dragon’s Claw, as pictured here, and then hang on for a dizzying spin off of icy rock spurs through some branded crystal spikes. Of course, the fun is even getting from one ramp to the next, let alone going off the last one correctly to land somewhere near the ice fishing hole.

Here’s to the landings after each ramp not leaving you saddle sore!

7. Dwarves With More Attitude Than an Asuran

But who can blame them. You did destroy one of the greatest spears they ever made and now you want to make mini versions of it. At least he is happy to have people around to talk to as you acquire the key that lets you explore the treasure rooms.

Make this dwarf happy by making daily visits to him when you have the ‘key’ to get in. As mentioned in the slip sliding section you get one piece by fighting the big oil slug in the south and the other doing the fight at the keep.

I could be wrong, but if you pay attention to the conversation as you go through the story you may pick up on some things. There may be a progeny in the oven. After all, why would Gorrik sound so dreamy in how he says things at the end of a conversation, when first working out things in the camp area. And Taimi is crankier than usual whenever someone mentions checking in on her.

I’m not going to tell you what Gorrik said. You will have to play through the story and see if you pick up on what led me to this assumption, if you didn’t notice it already.

9. Play Hide and Seek in the Dwarven Treasure

I’ve mentioned that you get two parts from the meta fights and bring them back to the dwarf in the main chamber of the dwarven treasure area. Well, that fun item not only allows you to get access to start the exploration of one room from this dwarf, but it will find a hidden treasure chest in each room you go, by use of a special action key. Survive the puzzles and you find treasure besides the plate to the next room.

Be aware, this item has a time limit so don’t get distracted by real life or you may miss out on a hidden chest or two. Also, don’t die or you lose the item, too. Don’t fret! You can get to the last glorious treasure room without this item if you run out of time or die, you will just miss some extra shinies on the way.

By the time you made it around the map for metas, survived the puzzle mazes in the various rooms leading to the final treasure and have completed your looting, you will probably be tired. Take a seat on a golden throne to take a load off. No one will mind.

Now get up. Go out there and find many other things to do, like Chasing Tales that will make you feel like you are chasing your tail and other great adventures.